When you look at most designers’ portfolios, you usually see beautiful, polished work — finished products with plenty of spit and shine.

Those examples are great for showing off your talents and the culmination of your hard work, but the final product is only a small percentage of your total effort. It just represents your last decisions that made the cut.

In reality, most projects are ugly and messy. There are piles of half-baked explorations and heated arguments left behind the scenes. That’s why the shipped version of a design can seem obvious in retrospect — you threw out all the confusing stuff along the way!

Most of this dirty work ends up in the trash or unseen, and that’s too bad. We should all show our dirty work more often, because it’s documentation of the real work. It explains your thought process and gives critical backstory to the final version. (By the way: having that backstory also makes it easier for employers to hire you. Sometimes it’s much more valuable than the end result.)

We’ve been doing this for years in our Design Decisions posts. In that spirit, here’s a bit of our recent Basecamp dirt. This is what it’s really like to make the doughnuts!

Example 1: Should we show a button or not?

Sometimes small things are unexpectedly controversial. When we worked on Archiving Discussions, we had a running debate about whether we should expose the [Archive] button on discussions all the time, or keep it hidden away in a “bulk archiving” mode.

Archiving is an occasional use feature, so we were concerned about making it too prominent. For a while, we even planned to hide the button behind a keyboard shortcut and make it a secret power user thing.

Finally, we all agreed that there was no harm in showing the button. It didn’t get in the way or make the Discussions page noisy — it made it useful.

There wasn’t much design work needed for multiple-file downloads, yet we fiddled with this link text profusely. We even changed it in production after we shipped the feature.

Working on a big product like Basecamp means there’s an edge case practically everywhere you look. When we added moving a single to-do, we had to accommodate what happens if there are no destinations to move to. Most people won’t ever encounter this state, but it has to exist for those who do.

Example 4: How should we show attachments?

One of the bigger challenges with attaching files to to-dos was deciding whether we should show each file’s thumbnail next to the to-do itself. To-dos already have a lot of UI chrome, so we wanted to tread lightly. We tried big thumbnails and tiny ones. 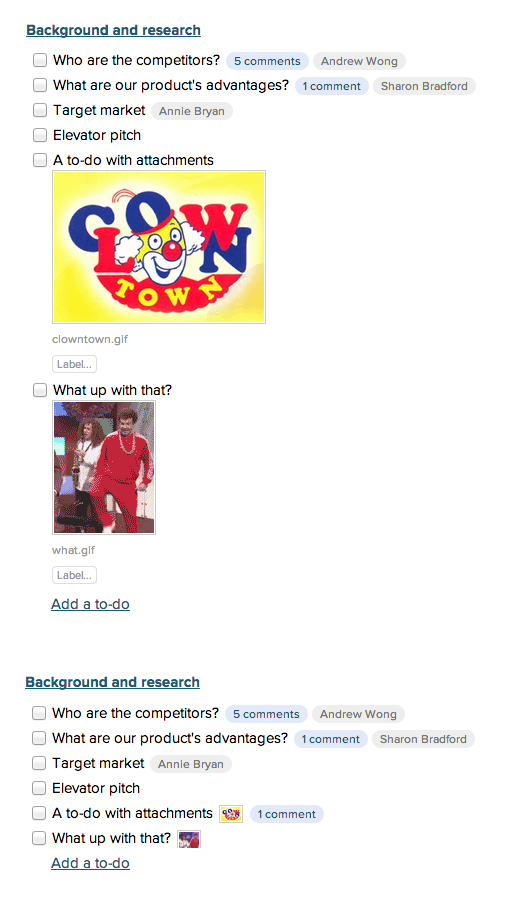 After several debates, we decided that big thumbnails were too intrusive, and small ones were too tiny to be useful. So we axed them and opted to show a paperclip icon instead.

There’s often a conflict between proper English and what wording can be programmed to fit a variety of conditions in software. This is why you see computers making silly mistakes like 1 to-dos added successfully. Carefully working around these situations is almost an art in itself. There’s always a push and pull between what you want to say, and what you can reasonably do without excessive conditional code.

During design for making templates from existing projects we included an option to remove to-do assignments in bulk. We had to try several times to find a version that was clear enough and didn’t violate basic English grammar in some way. 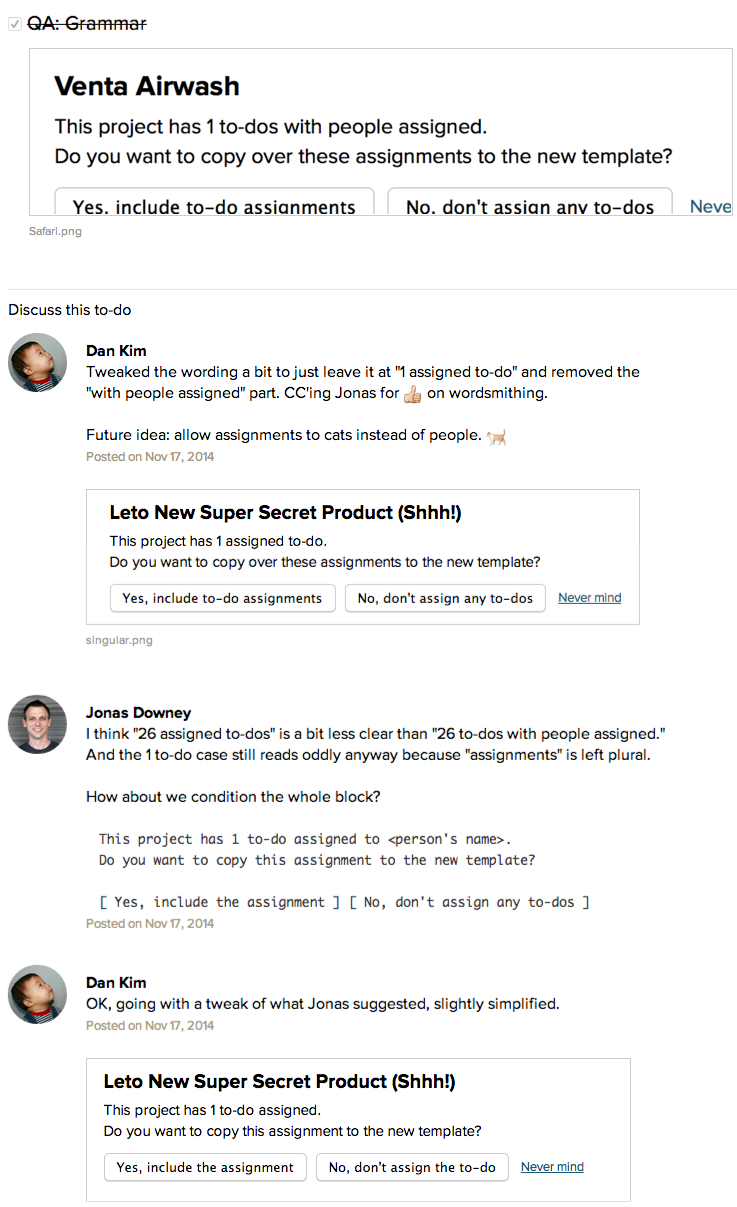 So there you have it — those are just a few of our recent examples! What stuff have you made recently that’s itching to see the light of day?

You guys have made projects publicly available after completion, but would you ever do this for an active, existing project related to Basecamp?

The thought here is it’s easier to share the “dirty work” after you’ve arrived at a destination you’re happy with. However, it would be interesting, inspiring, and perhaps more valuable, to share this at a time when the ending is not so clear and the current state not so glamorous.

For example, in weight loss, people often share a before and after picture, but don’t share when they decided NOT to hit snooze the second time at 6:07AM to go for a run before work. Or, maybe they cheated on their nutrition 3 weeks into their program and had to start all over again. We don’t share those moments as they happen and we curate the undesirable aspects of the process if we share after the fact.

I don’t have something itching to see the light of day, but I found this type of in progress dirty work sharing recently and it has been extremely inspiring and valuable to see the emotions, decisions, and resolve associated with this type of sharing.

@johnson I’d really like to, yes. We may start doing that later this year (need a few things in place first – stay tuned).

That would be great. It doesn’t seem like an easy thing to do (will people change the way they work because they know it’s public?, surfacing company sensitive info, etc).

I’d liken it to getting tickets to a “live” show and watching professionals do their thing. We have this now but where the professionals are musicians, actors, athletes and those shows obviously inspire people. This would be a cool concept, looking forward to it. -johnson

I think I prefer the small icons over the clip icon if there aren’t too many of them. This way at a glance I know what the attachment is vs clicking on the clip, download, open to find out what it is or what the image is about. The large ones are awful. They break the list look.

“Download a zip of these files” would have been better than the chosen “Download all of these files”. The first one is clearer. I am getting a zip. No ambiguity. The one you chose is not. Is it a zip? Server will send them as single files at once? ..? It’s not clear enough. I know it’s probably a zip but some users might not know. btw, it would have been beneficial if you posted what link was chosen in the post so I don’t have to follow that link.

Great post. I wonder how many software companies that care so much on this level of detail.

More public or live projects would be interesting to see.

Abdu: zip is not important since most people don’t know or care about it. Safari unzips the file automatically and all I see is a folder.

@Emil and Abdu: we had those exact same debates! There are usually good reasons for and against any given solution. At some point, someone has to make a call and choose the one that’s the best fit.

That’s another part of this “dirty work” idea: the version you ship might not always be your favorite design.

Most times, you’re balancing a number of other variables, including but not limited to: the development time you’ve allotted for the project, existing constraints in the app (both technical and design), and the team’s ability to reach a consensus about one solution over another.

So, sometimes you might personally prefer a version that didn’t ship, or you might pass on a small detail so you can move on to something higher priority. That’s ok—maybe you’ll use those ideas in the future. Or, you can always share them in a blog post. :)

Great post! I love to see the behind the scenes thought process.

Just a quick thought on the paper clip vs images. You could have it so when the paperclip icon is clicked it opens a preview of the image like reddit enhancement suite does for reddit images.

@Jonas I would like to see more of Why you chose an option. The logic behind it. I had Mark’s preview idea in mind too. I want to see a preview with the least friction of work. Basically best if I don’t have to click anything. Hover Intent plugin style might work where if I hover over a clip more than a second, my intention is to view a preview.

“You could have it so when the paperclip icon is clicked it opens a preview of the image.” —That’s exactly how it works!

Great writeup Jonas! I love learning from the behind the scenes, it shows many aspect of how interaction is made.

Curious… I see you’re very proactive and open about discussing things together in the company, but were there some decisions where the situation stalled because the 2 or more parts didn’t agree at all?

I wonder if it ever happens to you, because from the outside I’ve got the feeling that you always solve things in a nice way, but it seems a bit surreal that you didn’t ever had a situation were deciding was really tough.

We (on www.somewhere.com) have seen a couple of things happen when companies and individuals start sharing their work process and the ‘dirty work’ along the way.

2) companies become more human to the external audience and therefore more likeable as they share more of the ‘real’ or ‘dirty work’ that goes on inside. Not a big aha if you have spent time with people in real life, we all are more likely to engage and empathise with someone that shares the good and the bad.

3) new relationships are formed quickly. Once we start discussing work in progress, we create connections that are far deeper than the ones created on ‘feedback’ loops on essentially final product

Anyway – great post @jonas, curious to see @jason how you will share more, we have built a platform for individuals to do it, companies caught on and are now sharing too. Would love your view on Somewhere

Andrea and Peter, I’m working on a followup post about some of those issues. It’s certainly not always easy to agree. We’ve had heated debates, tried every angle, and shelved projects altogether. (Just recently, in fact!)

If you liked this Design post by Jonas Downey, you’ll probably like reading Basecamp goes back to basics, Exploring ideas in the pursuit of clarity, and The special recipe for DELIGHT