This morning I needed an app, but I had no idea where to start. I knew what the app should do, but did it exist? Here’s my story.

The Problem
We received this in the mail this morning. It’s a ticket warning issued by the City of Chicago. 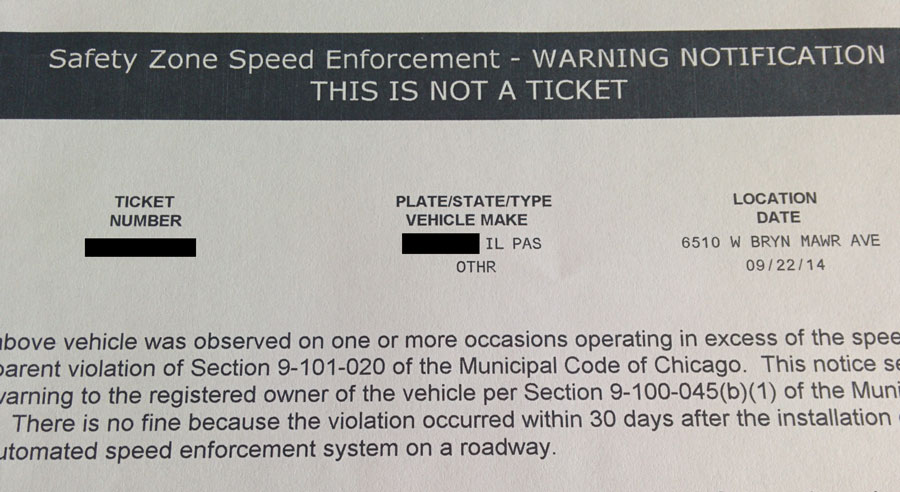 I know what you’re gonna say. See, we do follow the speed limit. The thing is—this was issued to my better half. And she is way more cognizant of the speed limits around the city. What probably happened was the speed limit was 35 mph then in the speed camera zone it dropped to 30 mph. The City of Chicago issues you a ticket when you’re going 5 mph over the limit. At least that’s what I think happened. Either way, it’s beside the point:
There must be some type of app that warns you of these speed zones.
Where to start?
I Googled “chicago speed camera app.” 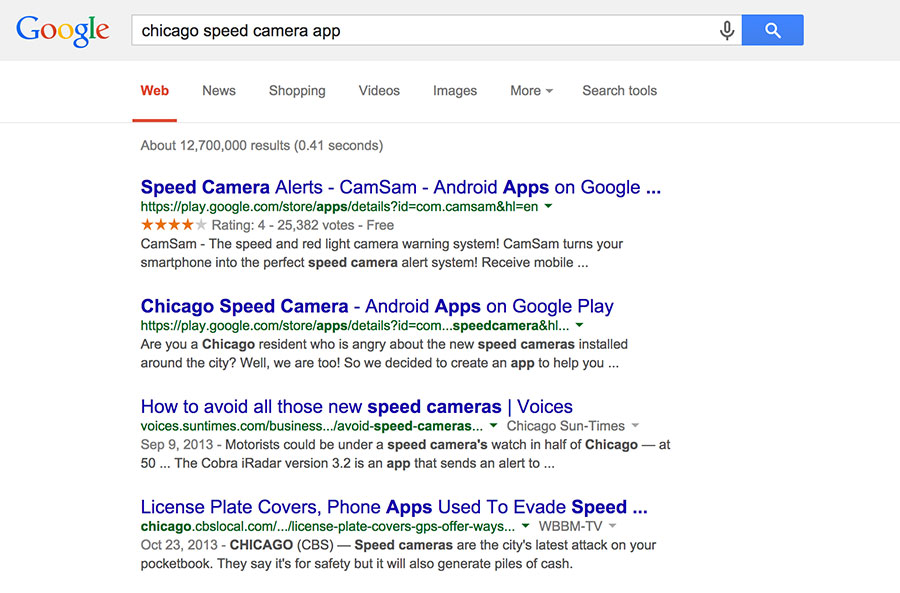 Interestingly, the first two results are apps for Android. Not sure if Google knows that I use Android. Well, of course they do. Anyway, awesome! Here are two apps that I can check out right away.
The first result
The first app, Speed Camera Alerts gets great reviews. No brainer right? 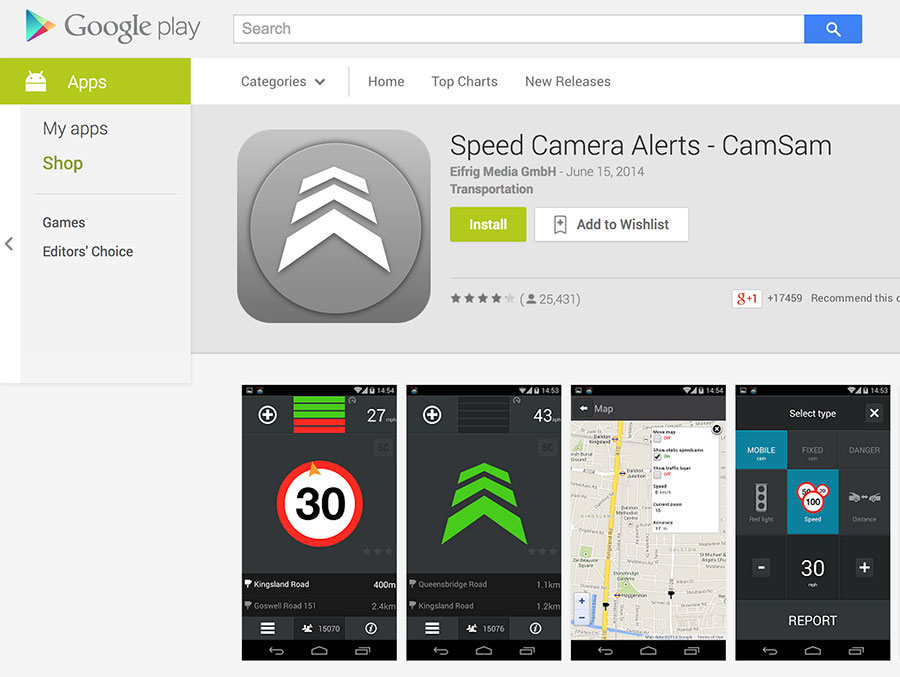 Except that it looks too European for me. Not the design, but too European in the vein of “Are they going to have Chicago speed camera information?” I thought, well, let me check out the second result…
The second result
The second app is called Chicago Speed Camera. You can’t name an app any more obvious than that. Again no brainer right? 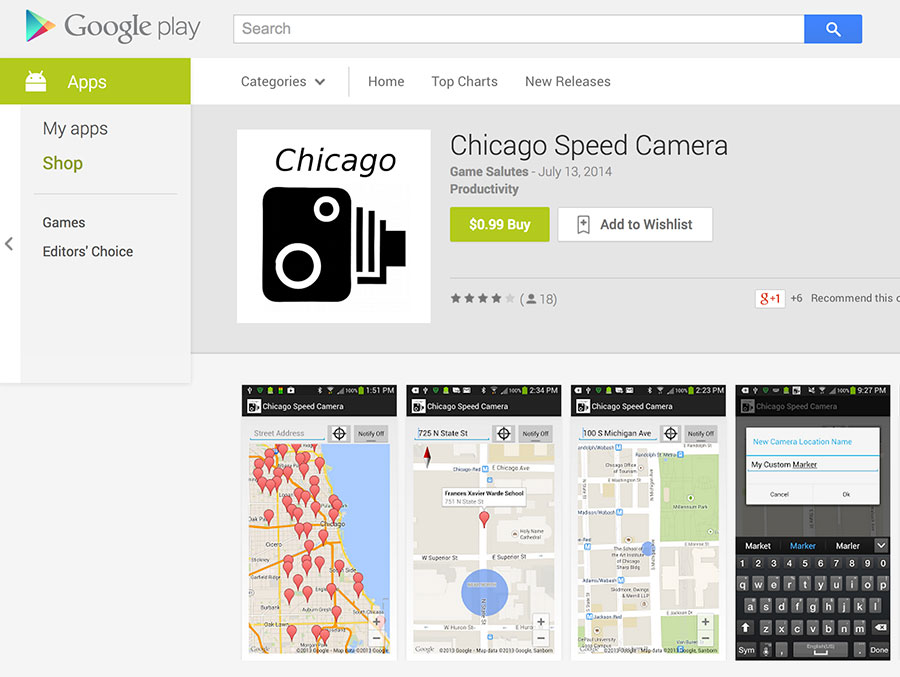 Except it only had 18 reviews. The first two reviews weren’t great. And there was a huge all caps disclaimer on the app description.
Going back to the Google results
So I went back to the Google results to look at the 3rd link. No one does that! (Except for me.) It’s an article called How to avoid all those new speed cameras.
Interestingly, the article is about a 53-year-old local company Cobra Electronics and their smartphone app called iRadar. I’m about to check out that app, but this quote catches my eye:

The app update comes just as Cobra Electronics faces tough competition, including from popular apps such as Trapster and Waze. Trapster has 16 million users; Waze has 50 million; and Cobra’s laser radar-detector version has 1 million. 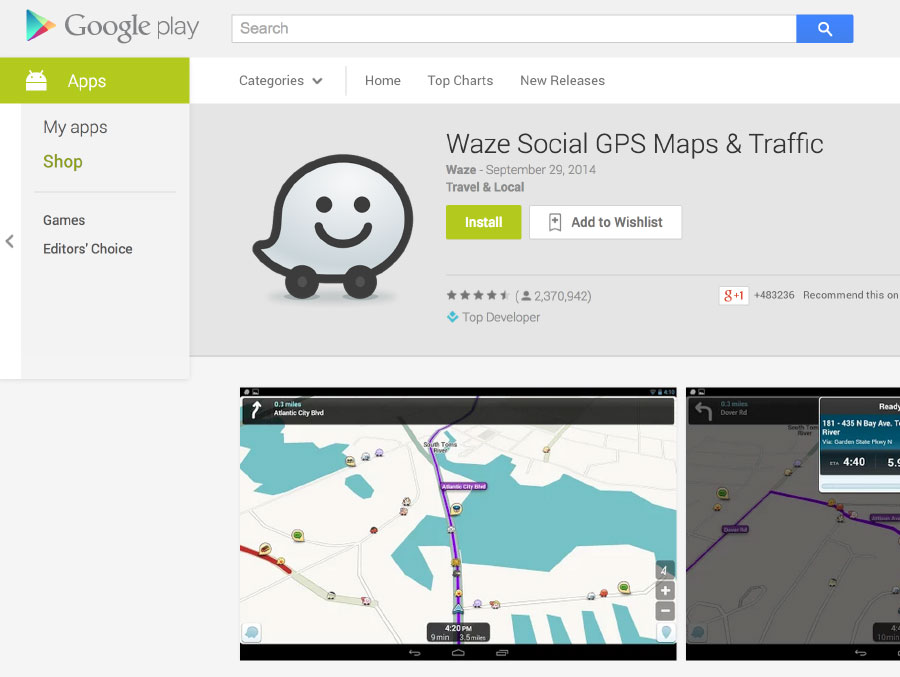 I remember seeing a couple friends’ homescreens a while back. Yeah I know, that’s creepy. Anyway, I think I saw the Waze icon on there. So I ask them via Instant Message:

He’s an iPhone person. So I ask my other friend who has Android. I thought I saw Waze on his screen too (yes, I know creepy). How’s the Android app?

I asked them both about speed cameras and how Waze works in alerting you. Waze seemed like the app I was looking for, but there was one small problem. For Waze to work, you have to open the app before you drive. Then when you’re done driving, you have to stop the app.
I asked my Android friend about turning it on automatically by listening to Bluetooth. He replied, “yeah. or, you can just get into your car and turn on waze :/” I don’t want to remember to do that though. Well, actually I know myself too well. I’ll definitely forget to do that.
Surely there must be some way to automate this?
When I get into the car, my phone automatically connects to the stereo via Bluetooth. I figured there must be a way to launch Waze by listening to the Bluetooth connection.
I’ve heard a lot about IFTTT. Unfortunately it doesn’t seem capable of listening to Bluetooth connections. I’ve also heard a lot about Tasker. Tasker is one of those apps Android users will tell you makes Android awesome. I’m sure it’s awesome, but I just want to do one simple thing: Listen for Bluetooth and launch an app.
One of the nerdier things I do (I do a lot of nerdy things, but this is up there) is listen to the All About Android podcast. Every show they have a segment where they review apps. One of the hosts mentioned an app called Trigger that was positioned as a simple version of “Tasker”.
I checked out Trigger’s product page, but it wasn’t clear if it did exactly what I needed. Luckily, I found a review on YouTube.

It works perfectly!
After that initial path of Googling for an answer, I have a setup that works: I get into the car, the phone pairs with car’s Bluetooth, and Trigger launches the Waze app. Now I get alerts like, “Speed Camera Ahead” while I’m driving.
OK so what’s the point?
I wanted to share this with you because often times when we’re marketing something we’re looking for a Silver Bullet. One awesome spot or placement that will get people to use your product.
Look at my experience. I had a need—find a speed camera app. Searching on Google gave me 2 clear app results, but I didn’t end up downloading those. The Google result did get me an article about another app, but I ended up asking friends on IM about one of the competing apps because it was mentioned in the article. Their personal recommendation got me to download the app and set up an account. I wanted to improve my experience with the app by automating it based on my car’s Bluetooth connection. I remember hearing about that app on a podcast. Then I watched a review about the app on YouTube. Now I have the perfect solution from all these disparate unrelated sources. That’s pretty fascinating.
If I was to pick the most powerful point in my decision-making process it would be the recommendations of Waze by my friends. It would take a huge leap of faith to install the app and create an account for something I wasn’t sure would work. It was ultimately because of their recommendations that I chose Waze. But I wouldn’t have known that Waze could do what I wanted if it wasn’t for Google either.
One more thing
I started out by saying the ticket warning was issued to my wife. The problem is, she has an iPhone. Waze will still work for her, but now I have to look into automating Bluetooth, etc on iOS now… Any recommendations?

Very thoughtful article. I go through very similar product searches when I’m looking for that “silver bullet” app. I rarely, if ever, go to the Apple App Store directly. It all seems a bit convoluted and confusing, doesn’t it? Why isn’t their a better way than Googling and following up on various reviews and sources with trusted sources? I love Waze on my iPhone and can’t wait to learn how to automate it.

If 18 reviews is not enough, how many reviews do you need? What if it’s a new app which didn’t have a chance to accumulate many reviews? If you need Android help, you can post at android.stackexchange.com, explain your dilemma and someone might help, give you advice like using Trigger. Also contact the app developer with your questions and get their feedback. It also helps them gauge user’s needs and what features to implement in the future. Some mobile apps work in the background and can ‘wake up’ when triggered by some events. Ask Waze developers about Waze coming into action when sensing a bluetooth connection. Personally, I ask developers about missing features instead of depending on app hopping.

Or, you know, drive the speed limit. And get your faster half to as well.

It’s frustrating that the app stores do literally nothing to facilitate these conversations (and they will always be conversations; this kind of learning can’t be automated, just made more convenient and predictable.)

I use Trapster. Crowd-sourced, and allows for fixed red-light and speed cameras, along with combo (red-light & speed) cameras, as well as traditional “cop in a car” speed traps to be reported. And a pile of others things. Free.

If you liked this post by Jamie, you’ll probably like reading Photo: There are nearly 40 different wireless plans…, Question: I thought Internet Explorer 9 was supposed…, and Behind the scenes: Getting Real with the Backpack homepage