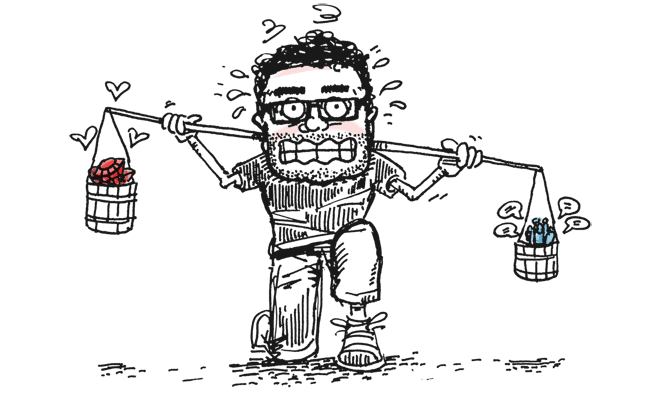 I was on In Beta a while ago, and we talked about the “guilt” that comes with maintaining open source projects. I feel both intensely passionate and exceptionally guilty with how I contribute to open source. I love getting patches into new projects, and the needs of existing projects are demanding.

An open source contributor doesn’t feel guilt as in a crime, but guilt as in time: What is best to spend your yours on? Steve Klabnik has a strategy for dealing with a limited amount of time:

The basic idea is this: you try to minimize the things that are bad, and maximize those that are good.

If you’re new to contributing, you’ve probably only experienced the passion side of open source: the rush of starting something new or getting that pull request accepted. This is tied closely to what makes an open source project pleasurable to work on and worthwhile for others to use. Generating passion for your open source project can be done in many ways:

The erosion of open source passion is a sad one. Conflict is a common cause, but there are others as well:

There’s a flip side to passion: the guilt. The guilt of not responding to someone who needs help with your code. The guilt of issues/pull requests piling up, and newcomers unsure of who to blame. The guilt of not having documentation when you may have figured it out yourself without any. These have affected me the most:

My job as an open source maintainer is to break down the worry suffocating my email inbox, issues dashboard, and support queues. It’s easy to drop in and fix something, then disappear. It’s much harder to stick in the game for months or years and make a serious dent on a project. Here’s what I have been trying lately to destroy my open source guilt:

“What project should I work on?” is not always a question of which demands priority, but which I can make most effective use of my time on to minimize the guilt and maximize my passion.

Perhaps emptying out the issues queue will decrease the worry. Implementing that new feature I had in mind might keep the fire burning.

I invite you to evaluate your own projects in a similar manner: Maybe we’ll all feel a little less guilty and a little more excited to be contributing to open source.

Thanks to Jeremy for feedback and Jamie for doodles.

I definitely feel guilty for not contributing more or paying more attention to my projects. I’ve even had people accuse me of riding a high horse for suggesting that direct emails to my inbox ought to be in a mailing list where everyone can benefit. It’s exhausting.

Great read Nick and thanks for the tips. Have always felt guilty about not contributing more but never seem to have enough time to really get involved.

About to start converting a new feature/module into a gem and then open-source it so hopefully your pointers will help this new player avoid some of the traps :)

Thanks for sharing your perspective. As a beginner RoR student at the Starter League this post has risen my appreciation and gratitude for open-source projects and the people behind them.

Hey Nick, Greetings from the Queen City, I stumbled on 37signals via Fast Company. Although I am not a programmer, the ideas of open source have always inspired me. These tips cross over well to other parts of life, most of them.

Hi Nick. Just wanted to thank you for inspiring me to venture into the open source world: http://wsubi.codeplex.com

If you liked this Programming post by Nick, you’ll probably like reading An ecosystem, fragmented, Shipping Basecamp for iOS 2.0, and Video: “The UNIX System: Making Computers…