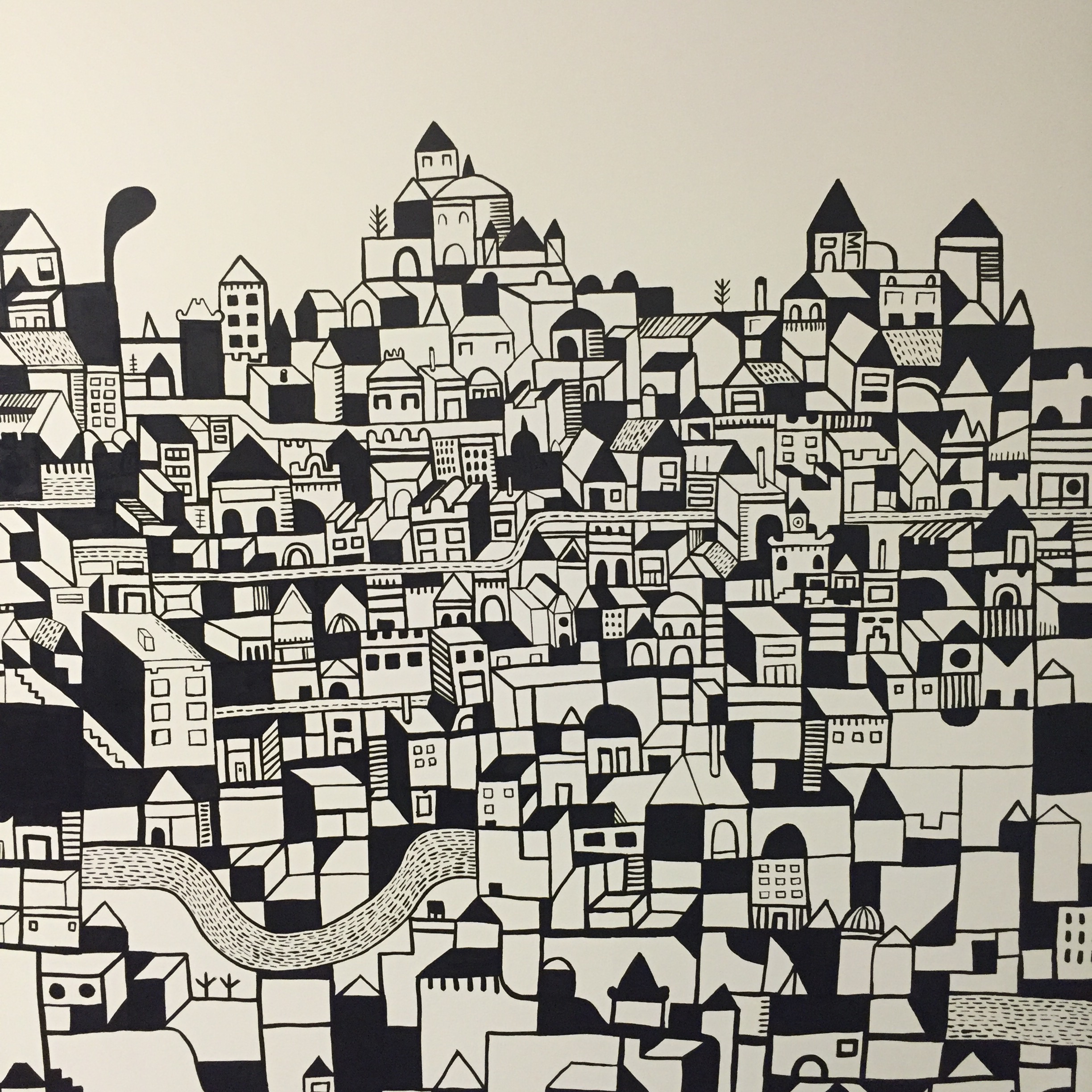 When I painted a mural on the wall of the first 37signals office back in ‘99, or 2000, I didn’t have a camera phone in my pocket. That’s why I took pictures of the wall with a disposable camera. If back then I was the competent human being I am now, I would have gotten those pictures developed, but I was an idiot then, and I have no documentation of that mural. I remember that it had monsters in it. I was into painting monsters. 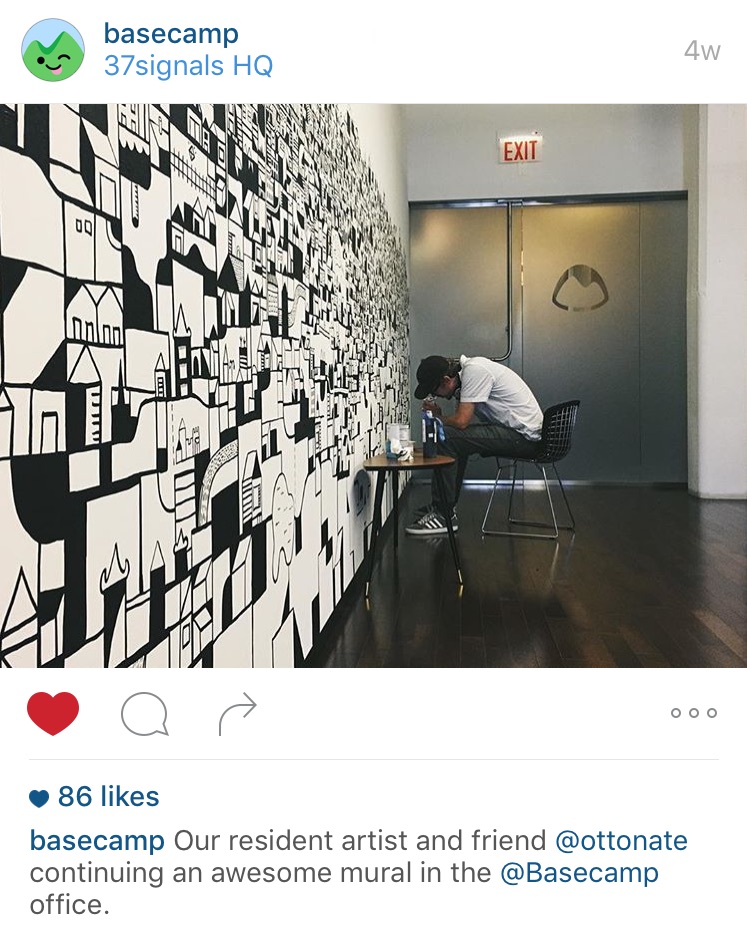 About a month ago I completed a new mural in the front entrance hallway of the Basecamp Headquarters. Luckily I have a camera on the thing I browse Facebook with, and I keep it in my pocket. I was on a black and white abstract cityscape kick when I pitched the idea to Jason and Michael Berger. Jason had some ideas but gave me the license to do whatever I wanted. Doing whatever I want is what I do best. I’m really proud of the results, and grateful for the opportunity. I’ve done several murals, but this one might be my favorite. It was Jason’s idea to go around the corner. 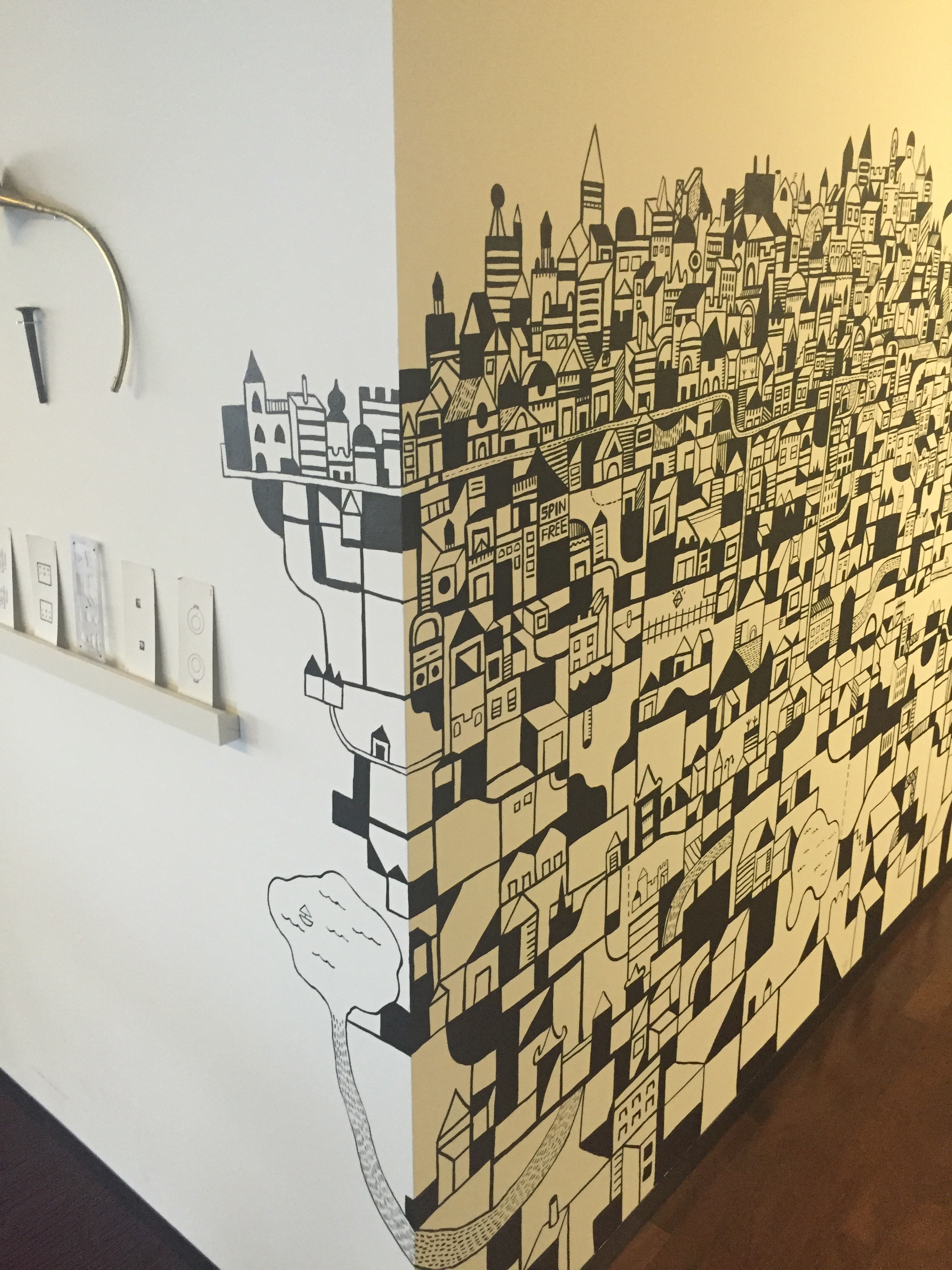 I put a few Easter eggs in there. It says Basecamp. It also says 37signals and Spinfree. There is something that looks like a ruby on some rails. Jason didn’t want it to be too Basecamp specific, and I agreed with that, so those things are all somewhat hidden. 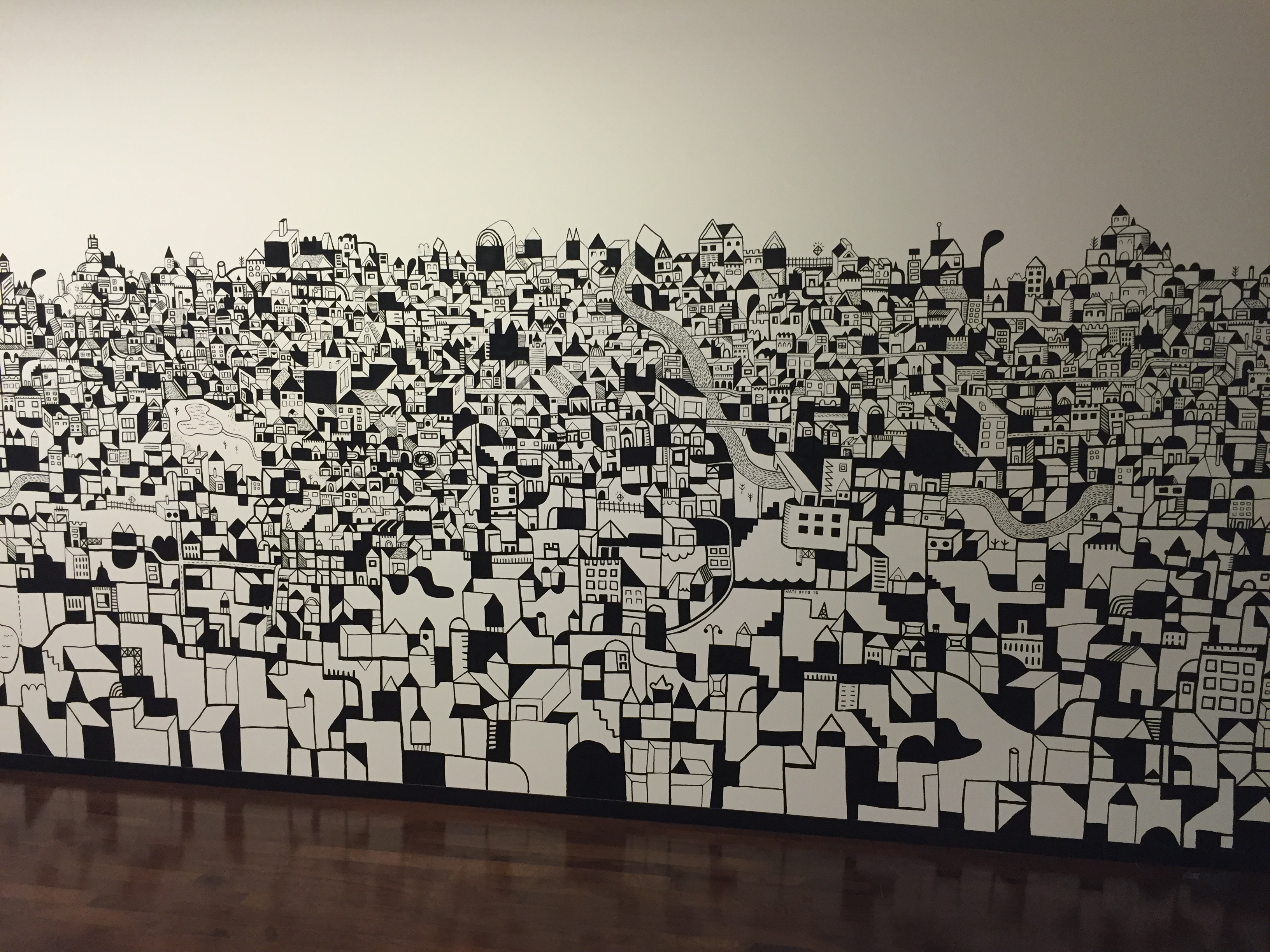 By the way, I love doing murals, and I especially love doing them in offices. It gives me a chance to soak up a company’s culture for a few days or a week while I work, and tech companies always have snacks. I’m down to fly to Germany (or wherever) and do a mural in your office. Basecamp is a fifteen minute bike ride from my house, I’m already familiar with the culture and the people, and I have a fob, so this was a fun one. Say the word and I’ll paint the whole place! 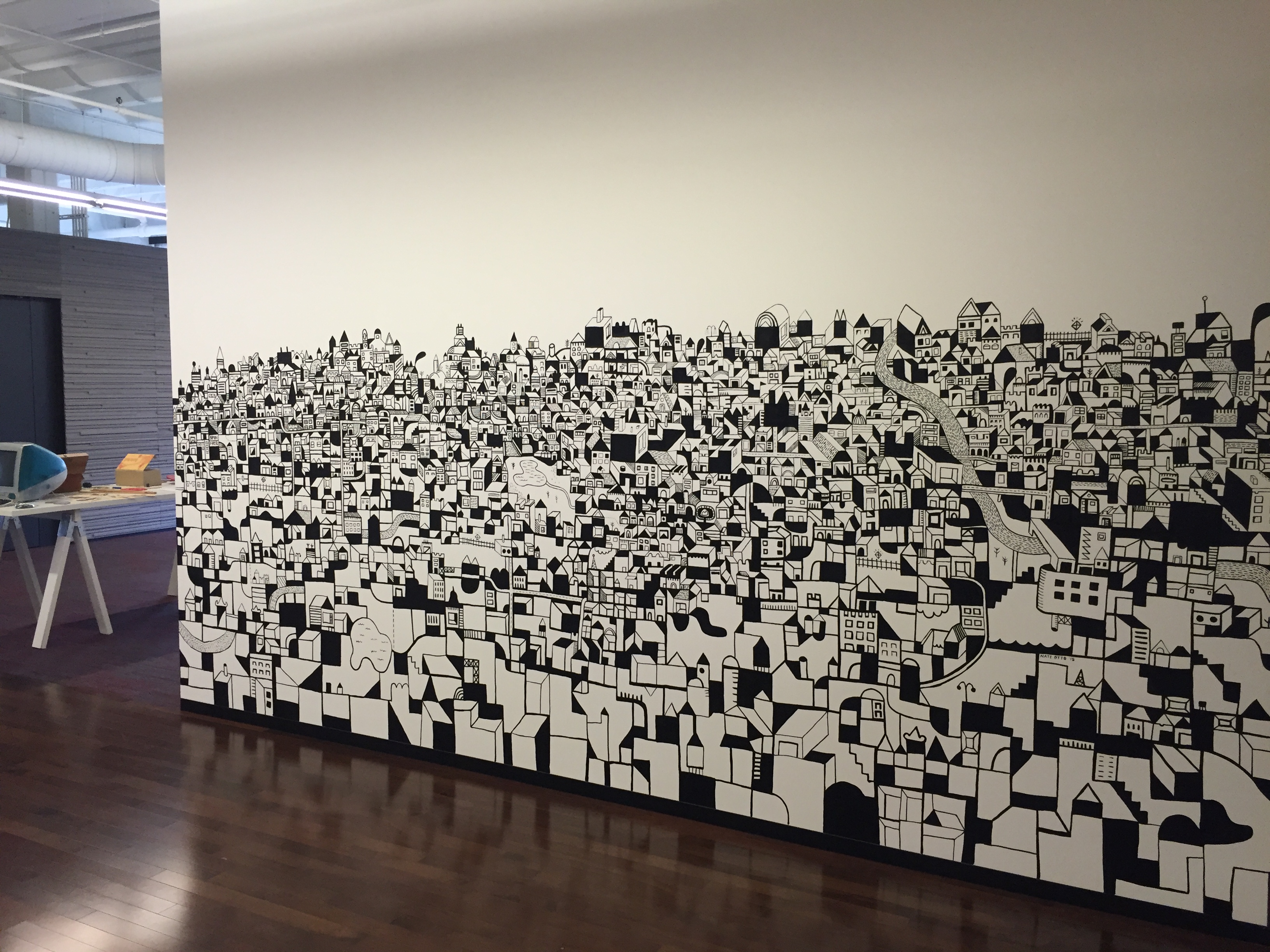 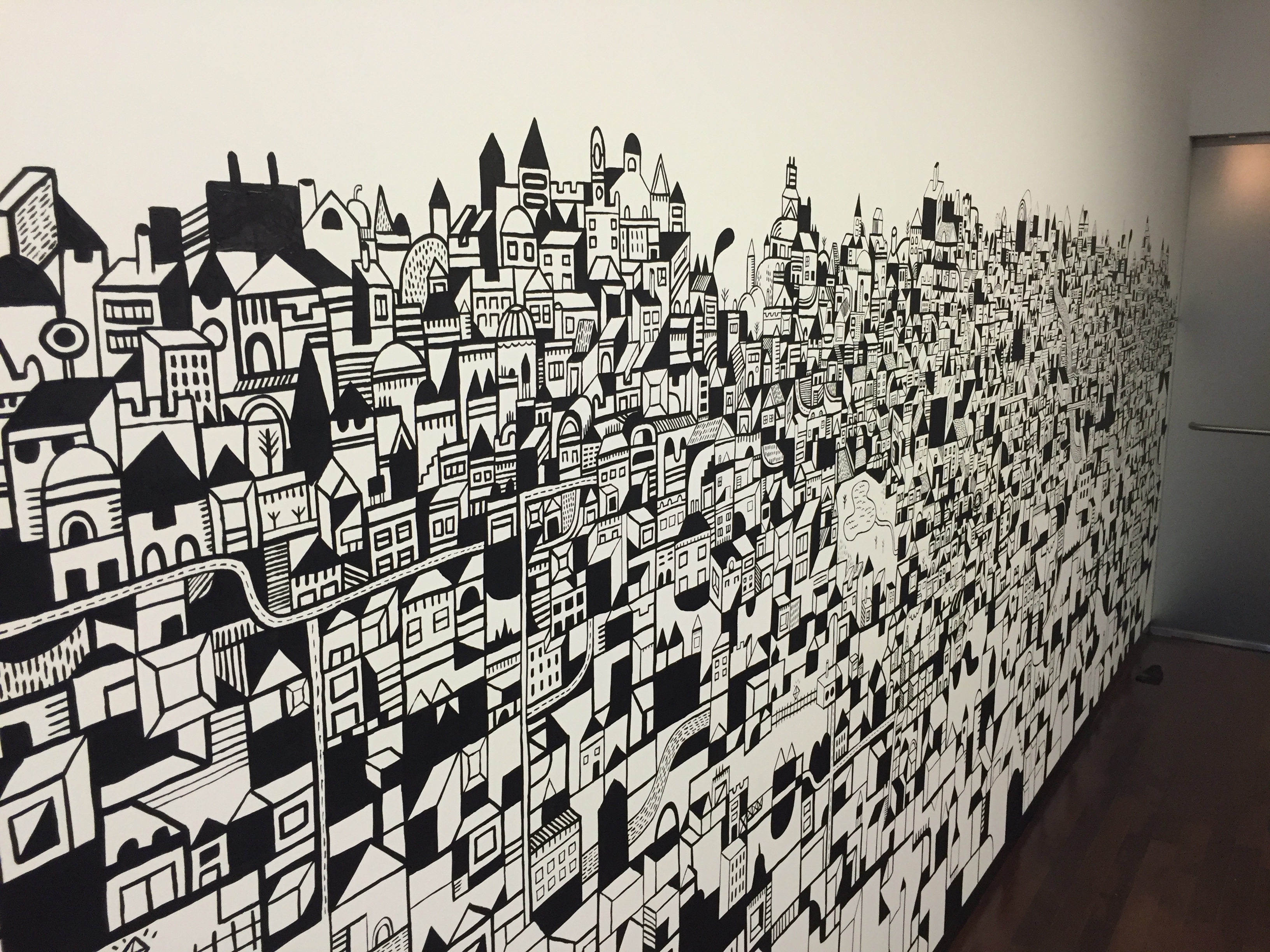 Engrossing! I really like the style. Do you consider a work like that finished or do you ever return to add or change something with more ink/paint?

That is insanely cool!

I spy a an old blue translucent iMac in the office…what’s the story ?

cool! I really like the style I expect you to visit my blog… Moda Model – Örgü Modelleri

@Michael I “finished” it several times, but I knew it had to be really be done in time for the meet up in October. I often go back and work on stuff that had been previously finished. I remember seeing a Robert Rauschenberg retrospective at the Guggenheim in ‘97 and the thing that stuck with me was his attitude that the work was never finished. His collectors would have to hide his work from him when he came over so he wouldn’t add marks to it.

I’m always surrounded by my art and I can’t help but update it constantly. In fact that is what I’m doing today. I’m working on a piece that has 2011 written on the back of it. I have some stuff for sale here.

@Pedro There is a sort of museum display of design stuff in the office that was set up I believe by The Post Family. The iMac is a part of that and you can see a few other items in the pic of the corner.

cool looks like 3D hmm, is there any video how to draw that?

If you liked this Design post by Nate Otto, you’ll probably like reading Deconstructing the Cityscape, Extra Drawings, and Photo: Less works.