Yesterday I did an extended Q&A session at Techstars Chicago. Great group, great questions. I really enjoyed it.

Before the talk, Troy, the guy who runs Techstars Chicago, showed me this board they had propped up on an easel outside the office.

The board listed every company in the current Techstars Chicago class, along with some numbers. The columns included inventory, inventory sold, remaining inventory, and net profit.

Here’s a picture of said board: 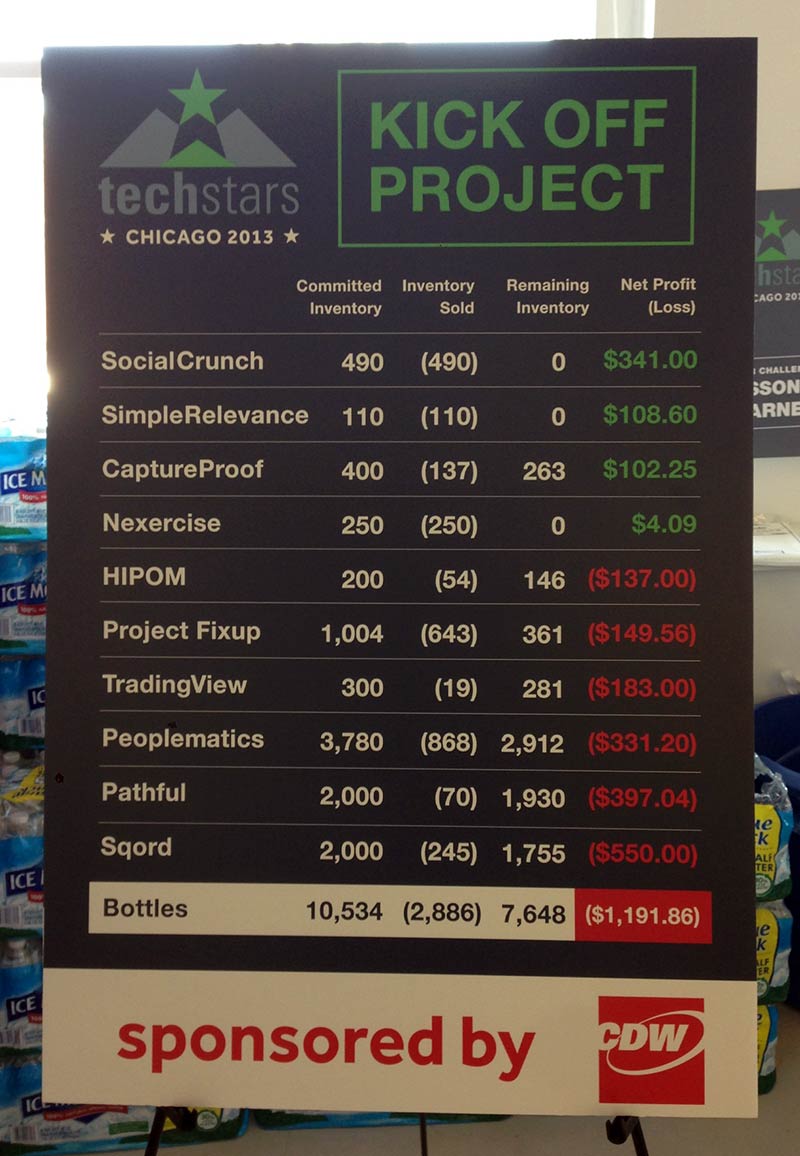 These are the results from the challenge. But what was the actual challenge?

A few other rules… They couldn’t sell them in the Merchandise Mart (which is the massive building where Techstars Chicago is headquartered), so they had to hit the streets to find buyers.

I believe they had one day to sell their water.

Observations from the results

I wonder if the results in the water challenge will mirror the results of the companies themselves if/when they get their own actual products to market.

Overall, I love this exercise. I think this is a great idea. No matter what you do in life, selling is a core skill. And there’s nothing quite like having to hit the bricks and sell your wares. It’s the best teacher you’ll ever have.

This article has a few more details about the contest rules and how SocialCrunch pulled out the victory.

Apparently you’ve never watched an episode of The Apprentice.

This basic format is common on that show.

- have low inventory, and

- most importantly … pimp out their rich friends to buy a single bottle of water for a ridiculous sum of money.

Essentially, it becomes a popularity contests on who has the richest friends who will come down and buy your product.

As a result, these contests immediately become useless.

Interesting. This reminds me of an interview of DHH talking about revenue vs profit.

Sitting there telling Jason about business while you purport to watch TV all day. Baffling.

Knowing that each company was “dinged” $80 for every participating employee was interesting.

You wrote: “The top performers always: ... most importantly … pimp out their rich friends to buy a single bottle of water for a ridiculous sum of money.”

In this case, the top performers cut deals with big companies. Seems like a rational and typical business move to me.

As one of the guys on the Peoplematics team, I’d love to share with you what we were thinking going into this exercise. In mind was that famous quote from Michelangelo: “The greater danger for most of us isn’t that our aim is too high and miss it, but that it is too low and we reach it.”

Our team made the conscious decision to pick an outrageous target (in this case 2 pallets of water) just to see how that would push us to perform. We also made the decision for our entire team to participate in the experience even though it came at a cost simply because it was a great bonding opportunity. We actually continued to have sales for the remainder of that day and ended up selling over 1200 bottles and breaking even.

We did learn many important lessons from this exercise which included the difficulty of selling, challenges of forecasting, startup optimism, and the logistics of moving over a ton of water. However, I think had we tried to make this an exercise of profitability rather than an exercise of personal challenge, we would have achieved only a fraction of what we ended up doing.

Thanks for visiting us Jason and for a great talk. We were inspired.

“In this case, the top performers cut deals with big companies. Seems like a rational and typical business move to me.”

Exactly the business Jason has repeated said he doesn’t want to be in.

Interesting… but all I can think about is all those wasted bottles. Can we stop with the bottled water already? Chicago tap water is fine.

Reminds me of the local guy that sells Christmas trees out of a little grocers show and a conversation we had. For the 3rd year running they had way too many left at the end of the season – literally a few hundred left. The boss always over ordered. Three years running that had happened. Three years they had made a loss on this line.

But it was the simple devastating truth of the wizened shop floor guy at the sharp end, that cut through to the bone: “The most important thing you must do is sell them all -it’s the surest way to make money.” That would have made it successful. From there you can learn and have funds to reinvest with much more knowledge of what worked.

I think you’re reading too much into this exercise. The most profitable team sold much of their inventory to friends for $25 to $75 per case. Asking friends to pay 5 to 15 times market price for a product hardly seems viable for a company’s real products.

“Asking friends to pay 5 to 15 times market price for a product hardly seems viable for a company’s real products.”

Luxury brands do exactly this and have quite a bit of success doing so.

Regardless of how interesting the exercise may have been it just makes me sad to hear that much bottled water was being sold.

Bottled water is a plague on our environment and not something that should be encouraged! Something that is virtually free being sold for more per gallon than gasoline and at the environmental expense of the community it was pumped out of.

@Sarah: “Luxury brands do exactly this and have quite a bit of success doing so.”

probably not all the teams tried to sell ridiculously overpriced water bottles to their friends. Still loss is a clear sign of wrong strategy.

@Parker A pointer: Saying water is virtually free is not a helpful (or necessary) addition to the world view you are espousing. It most certainly is not.

I still don’t get how much a single bottle of water costed to the each company for the initial upfront.

If you liked this Business post by Jason Fried, you’ll probably like reading Big news for Highrise, Link: Why we're building a whole new Basecamp, and Announcing the second "Switch Workshop": Gain fresh insight into why customers choose, or leave, your product.