Alexander Torrenegra is cofounder (along with his wife, Tania Zapata) of VoiceBunny and Voice123. This Q&A is part of our “Bootstrapped, Profitable, & Proud” series which profiles companies that have $1MM+ in revenues, didn’t take VC, and are profitable. It has been edited for length and clarity.
Tell me a little about VoiceBunny and Voice123.
Voice123 is a marketplace and VoiceBunny is a production house.

In Voicebunny, you can post a casting call, you can search voices and you can also opt to simply give us a script and we’ll pick the voice for you. You pay us, and then we pay the voice actor fees that we have agreed upon with the voice actor previously.
How did you get started — what got you interested in this particular field?
I cofounded multiple companies. Then I met my wife, and she’s a voice actress. And I learned about the voice industry and how cool it is, and how widespread it is. If you pay attention, you’ll realize that every single day you probably listen to 100 different professional voices in radio, in TV, phone systems, broadcasting, video games, hotlines, anything you can think of.

By knowing Tania, I learned that finding a professional voice used to be really cumbersome. You had to go through a casting director, and a talent agent, and auditioning studios, and recording studios, and the union, and people who were in the middle of the process just to audit the payments and royalties. We realized, you know, maybe we can do this online and make it faster and actually allow people to talk to each other directly.

Both businesses ended up taking off relatively fast early on. That’s why were able to bootstrap. We didn’t require venture capital, since we came up with business models that we could have cash flow from the get-go.
So how did you fund yourself at first?
We had saved $30,000. Back in the day, we were consultants, doing online marketing consulting full-time. The rest of the day and on weekends, we would work on Voice123. Eventually Voice123 grew and we launched VoiceBunny. We invested our savings on pay per click, and that’s how we got the initial traction.
Can you tell me a little bit about the period between launch and profitability? Who were your first customers?
It took six months for us to become profitable. Initially, the first three months, the service was free, both for buyers and sellers (the voice actors). After three months we realized it was going to be quite difficult to charge money to the buyer, because they were not used to paying for the casting service, or the search service. We realized we should charge the sellers a subscription fee instead of a transaction fee — we don’t want to be in the middle of the transaction, because of the industry requirements. Usually there is a lot of paperwork signed between the voice actor and the client. 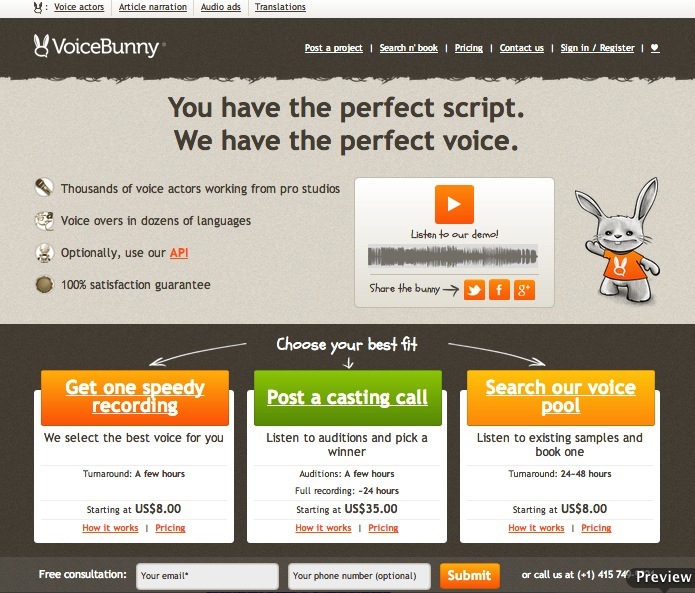 The other benefit of going with the subscription fee for the seller is that usually when a seller pays a subscription fee to participate in the marketplace, they are paying you, the marketplace, based on the amount of money they expect to make from the marketplace in the long term. That is great for a bootstrapped company because it gives the company cash flow early on, even if you don’t have a lot of buyers in the marketplace yet. So we took that money, and then we started looking for buyers. And since we had a great product, buyers came in really fast, and the word spread quite fast.

Before VoiceBunny and Voice123, getting a professional voice of 30 seconds used to take $3,000 and three weeks. After we launched, very quickly, the price average came down to around $400 and it took less than three days to complete the entire process. Now, today, it’s $200 and takes 24 hours with Voice123. With VoiceBunny, it’s $50 and it takes around 20 minutes. It’s way faster now than before.

If you listen to the free version of Pandora, most of the ads are created with the VoiceBunny platform.
What is your culture and work environment like?
We have an office in San Francisco and we have an office in Bogotá, Colombia. Research, development and operations and ops is done in Bogotá. Project management, marketing, and sales is one out of our office in San Francisco. We are almost a family. We always have lunch together at the offices. We hang out a lot after work. We make sure that every time we hire a person, we hire people that we would like to hang out with. We hire people that we would like to be friends with.

Because we have two offices, we invest heavily in making sure that we are highly connected. We communicate pretty well — for example, we have 24-7 video conferencing between the two offices. So we can simply come to the screen and wave hello. In fact, sometimes when we need somebody in a rush, we simply go and yell the name of the person and they’ll come running to the screen.

I hire people who are smarter than I am and do things better than I do. A good way of doing that is trying to hire former entrepreneurs. They usually have good advice, and they have experience. They value a lot the fact that we have been able to build a company bootstrapping it.

Why San Francisco and Bogotá?
We have offices in Bogotá because I’m Colombian and I went to college in Colombia, and that’s where I know most of my friends and tech people, so it was natural for us to build our tech team down in Bogotá. The fact that Bogotá doesn’t have a strong startup culture yet actually makes it easy for us to attract really top-notch top talent. We are kind of the 37signals of Colombia.

How many employees do you have? Are you growing your team?
Thirty. We are hiring tech people in Colombia and marketing people and sales people in San Francisco. Over 1,000 voice actors make most of their income thanks to Voice123 and VoiceBunny.
How is the company doing financially?
One of the benefits of being private is that we don’t have to share numbers. But something we are proud of is that this year we are doubling our income.
Congrats — how’d that come about?
The success we have had — great marketing people, having a great team. I usually try to hire people who do things much better than I do. When you do that, you surround yourself with really intelligent, amazing people, and the consequence is we are doubling in size this year. We expect to do the same next year as well.
What’s your ultimate vision — do you see yourselves selling the company in the future?
There is a quote by Thomas Edison: “My main purpose in life is to make enough money to create ever more inventions.” And that’s how I see the company. Our passion is to innovate; it’s not necessarily to make money. Making money is just a consequence of being really good at innovation. And whether we have the cash flow to continue innovating or whether we sell the company, as long as we can continue innovating, in this field or other fields, we are going to be happy.
What’s been the biggest challenge you’ve had to overcome as a company?
Learning how to be a leader. It’s very challenging. A good leader is a person who can share his or her dreams with others and have those others — the people listening to your dreams — make those dreams their own dreams, and work at trying to accomplish those dreams as hard as you do. And it’s not easy to achieve that. At least for me, it’s been difficult to learn that. Especially because I’m a tech person. And my logical intelligence is higher than my emotional intelligence, and leadership requires both. Fortunately my wife has a really high emotional intelligence, and I have learned a lot from her. I would not have been able to start this business without her as cofounder.
Is there anything you would have done differently, knowing what you know now?
I would have gotten mentors earlier on. There is a misconception that you [should seek outside capital] because angels and VCs are going to come with good advice, and I think they don’t have to be tied to each other. You don’t need to raise capital in order to get good advisors. You can and you probably should look for mentors and capital (if you ever need to raise capital) independently.

I didn’t look for mentors early on, because I thought people would only give me advice if I gave them the option of investing in the company. But later I realized that it’s not the case.

Today I have a really good board of advisors, not only for me, but for other executives of my team. The executives of my team, all of them have access to advisors, and if they want an advisor that we don’t have, I’ll try to find him or her for them. That has helped us a lot, because we ended up learning a lot of lessons the hard way just by hitting the wall. Mentors have allowed us to avoided many mistakes that we would have committed otherwise.
Has anything surprised you along the way?
How slow large enterprises are at adopting technologies. Initially I though that the success of companies like ours, and even companies like 37signals, was to get enterprise-level customers. It’s better to go after small businesses, early adopters. If you can convince them to use your service, eventually enterprises will follow, because they’ll realize that they’re going to have to adopt or they’ll lose. I was surprised to know that going after enterprise clients is not necessarily the best business approach. It’s actually smarter to go after the small clients.

I’m also surprised by the effect we’ve had in the lives of many people — we have many voice actors that are fulfilling dreams that before Voice123 and VoiceBunny they could have never fulfilled. Before Voice123 and VoiceBunny, the only way you could have done it was by moving to LA or New York City. Now you can live anywhere on the planet. Not only the fact that we have been able to achieve that, but how much they love us because of that — they really love what we have done. It’s a great surprise, to every now and then be hugged by somebody at a conference — they know you, but you don’t know them. It’s really nice.
Visit VoiceBunny and Voice123.
Read Torrenegra’s op-ed for Wired about immigration and bootstrapping.

Emily Triplett Lentz wrote this on Oct 01 2013 There are 4 comments.

Even though VoiceBunny hasn’t taken VC money (yet), they sure have been making every effort to get VC money.

A beautiful example of things well done, with patience and with love. I know them and I wish them all the best on all their endevours. Cheers! Jaime

That 24/7 video conference setup is a GREAT idea. Never thought of that before.

This is a great story. Thanks for sharing. Disrupting existing business models with efficient systems can be very profitable. Saving those profits from taxes will maximize these entrepreneurs contributions to society. This is a classic example of an entity that should take advantage of 26 USC 1202.