CarsForaGrand.com shows all cars currently on eBay for under 1k. Simple idea, yet Chris Hedgecock, the site’s founder, is earning a high six figure a year income from it. He recently managed to get nationwide attention for the site by driving cross country in one of the cars too.

After we hit New Orleans we noticed the coverage kind of snowballing. For example, the news story we shot in San Diego got picked up by their sister station in LA, the one we shot in El Paso aired in San Francisco, etc. By the time we were done in Miami, the story had gone national… on the largest day we did over 110,000 uniques – all for free…

So to recap, if you have an idea get off your ass and just go for it. The worst thing that can happen is you will learn something new, and you might just succeed beyond your wildest expectations in the process.

The whole thing is a great example of how you can take even the simplest of ideas, execute the heck out of it, market it creatively on the cheap, and see big rewards. Nice job Chris. 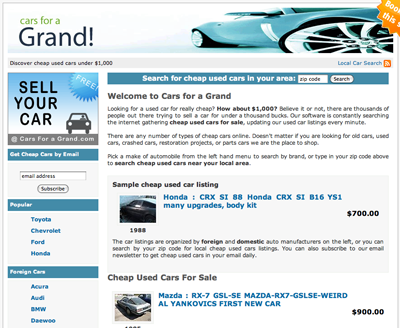 How does this make money? I like the simplicity of the idea – although it appears that a big part of the execution was to get as much free PR from TV stations as he could.

Do you have inside knowledge to back up the “big bucks” in the headline? I always thought the site’s revenue was the missing piece in this story when I read it earlier. May be you can fill in the blank.

Do you have inside knowledge to back up the “big bucks” in the headline?

Source is the linked article. No inside knowledge other than that.

I bet that ”$100K” is bullshit, just the 2nd stage of their PR stunt to drive more traffic.

does anyone know their business model? how do they make money?

I’m just speculating, but I assume their revenue is:

1) a cut of the ebay auction revenues (ebay partnership program)

That is a nice story, and I hope for them its true. I’m a sucker for cheap cars like this. I really want that pontiac myself :) I miss my ‘81 olds toronado – flying bull.

But I remain skeptical of stories like these, especially from shoemoney. High 6 figures a year, could probably just mean they had a really good month from this and now they extrapolate that if they made x this month, after 12 years they’d have a high six figure income. But this might just be an unsustainable blip in their income/PR. That’s the skepticism though.

Like I said, personally I hope they continue to kick ass, and think this site was a good idea and know some folks that would have appreciated when they were looking for a cheap car.

Couldn’t $9,999.99 be considered high six figures in the most literal sense?

I doubt they are earning that much money. Most stories like that are PR and not journalism. Most of the time they just make it up.

At least that’s how it worked when I was in Marketing.

Can’t someone just figure out roughly how many <=$1000 cars sell on ebay, take the maximum feasible affiliates fees, and determine how much he could be making from the site?

Ebay pays him a commission whenever an item is sold.

Can that be? well, he’s not page 1 google for “cheap cars” or “cheap cars for sale”, Compete.com shows him with 60k uniques/month.

No I’d guess this site makes him maybe a couple grand / month.

But this guy clearly has a suite of sites, maybe the collection of his work is generating a lot of cash. If so, rock on brotha.

There are other sites that do this too and have a higher pagerank in google:

“The whole thing is a great example of how you can take even the simplest of ideas, execute the heck out of it, market it creatively on the cheap, and see big rewards.” I couldn’t agree more, nice post, this is the king of Post inspiring me.

His ebay commissions could be higher because sites of ebay’s nature often pay affiliates a registration bounty. I used to work for a different online auction and the affiliates’ earnings per reg. was something like $25-30 if I remember correctly. Even if people register and bid, but don’t win the auction for the $1000 car he’d still gets his registration bounty.

This made me think of the song “Thousand Dollar Car” by the Bottle Rockets.

Love this story! So I did get of my ass and create a site:) It’s simple and useful. It’s actually something I personally needed to help with my first home purchase. It calculates what a property should be worth if there were no housing bubble, so buyers can make educated decision.

Anyways…I’m at a loss for how to market it and would love some ideas. Some of the basics, discussion board postings, etc. just aren’t gaining any traction.

This site is totally misleading. Cars are listed with a $100 minimum bid, but the reserve price is well over a hundred bucks.

Hi guys, thanks for the cool writeup and feedback. All I can say for now is Shoe was correct in stating the income from the site. I have an email in to ebay asking how much I am allowed to discuss the numbers, and look forward to posting a detailed article on how the site makes money and how much.

Thinking of “Thousand Dollar Car” by the Bottle Rockets made me think of “Bottle Rocket” starring Owen and Luck Wilson.

Interesting write up for sure. Even if the site did only make about $1000 a month…that is still pretty sweet for just linking to other pages. If it were me, I would keep the model of how I did it under wraps. If everyone replicates the model (as many are probably trying to do this very instant), that will just flood the entire market with junk sites and will probably make the original site less lucrative.

After our socialist government implements their “trade-in for beaters”, cards under $1K will no longer exist. Increased demand will drive the price up and tax payers will pay for it. The other group that will pay is the lower income earner. He will no longer be able to purchase a used card for much under what our Supreme Leader is giving for a trade value.

Another good business model crushed by the Czars in WA.

It would help if he the locations of the cars on the listing other than just via the ZIP CODE search results.

This made me think of the song “Thousand Dollar Car” by the Bottle Rockets.

Interesting idea but I tend to think of this kind of ‘gimmicky’ marketing as mainly appropriate for novel or somehow different businesses. It’s sometimes hard for those of us involved in traditional businesses to find such cheap (or free) marketing stunts that work well. For (The Tapas Lunch Company, spanish food importers) it’s all about Adwords and little else seems to work. Better get my thinking cap on!

I disagree, I am constantly amazed at how much some of my clients generate in revenue with just a good idea and a little money. The volume of web users is such that you just need that one idea that a fraction of a percent use and you can generate a lot of click thru

If you liked this post by Matt Linderman, you’ll probably like reading The power of rough edges, [Screens Around Town] Xbox, Sharp, and R-mail, and Describe 37signals in 20 seconds or less