Graffiti is a problem in a lot of cities, but the tagging that annoys me most is that of American politicians. Take the Secretary of State for Illinois, Jesse White, as an example. I see his name everywhere and it’s making me crazy. He’s adorning my fucking driver’s license in a place more prominently featured than my own!

The website to deal with renewing license plates or anything driving is called “The Official Web site for Illinois Secretary of State Jesse White”. His HEAD is part of the logo! That just pisses me off to no end. If I ever get the right to vote in this country, the first thing I’ll do is vote for anyone but this self-promoting clown. 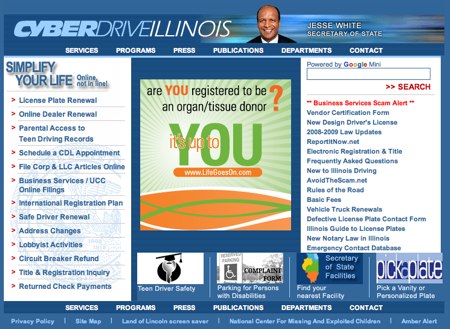 Stop worrying about spray cans and start worrying about the tagging of these renegade politicians. It’s much more costly to clean up their shenanigans.

It’s a great way for incumbents to make their name synonymous with their role, so don’t expect it to stop any time soon.

You should create a site that details what it costs taxpayers to slap “Richard M. Daley, Mayor” on everything. Maybe that could create enough pressure to force them to stop.

That’s been a problem in Illinois for a long time. It’s not just Jesse White either – every podunk mayor, commissioner and dog-catcher slaps his or her name on signs for parks, buildings, etc. Pretty ridiculous.

I couldn’t agree more; I live in downstate Illinois, and I see that guy’s name everywhere! Buildings, roadway signs… even more than the Governor’s name, although that’s become a revolving door…

But you know who I blame? The people of Illinois! It’s US who vote in these megalomaniacs every few years. Until we get our own act together and vote for someone else for a change, we can’t blame our politicians for being self-aggrandizing slimeballs…

David, I have a feeling we’ll see less of this in Illinois after the state had to spend tens of thousands of dollars to remove Rod Blagojevich’s name from signage, etc. after he was kicked out of office…

I agree that it’s an unnecessary ego boost and one that does require additional maintenance when office holders change. We’re not directly dealing with White, etc. so why should his presence matter. It’d be like having Jeff Bezos in the Amazon.com header… hell, even Steve Jobs isn’t present on the Apple homepage!

What, you expected something different from the state that gave us Barack Narcissus Obama? Chicago politics, baby!

a nice post on daley’s name ubiquity at the taste of chicago.

“His HEAD is part of the logo!”—Ha! Thanks for the mid-afternoon laugh.

I would hope should you ever gain the right to vote, you would find substantive matters on which to exercise your franchise rather than aesthetic ones. You should inform yourself about the policy issues facing this state, from budget priorities to capital infrastructure. I suggest The Capitol Fax and Progress Illinois for two great statewide political new sources.

While I am not generally a fan of ballot initiatives since they have pretty much crippled California, this issue seems prime for one: forbidding elected officials to plaster their name all over public signage. Embarrassing for a great city like Chicago to have these people think they own the city.

Of course when all the local governments started running out of money some of us pointed out that Gov. Gilmore’s Car Tax Repeal depleted the funds used to pay for schools, police, other little luxuries like that!

@Benjy: it took almost $500K to get helmet-hairs name off the signs! http://archives.chicagotribune.com/2009/jan/30/local/chi-tollway-signs-31-jan31

@J L: Thing is you are not going to run for public office without an inflated ego and you are probably not going to win without being a self promoter!

I remember when Alderman Matlak signs were EVERYWHERE. I was so happy when he lost.

I agree with the basic premise of David’s post. But also, there is always the contingent that likes to know/see/relate to the people running their state/city/municipal lives, as these have more true impact regarding most daily affairs than those at the national level. Still, David is right for the most part, and this is truly overkill.

What, you expected something different from the state that gave us Barack Narcissus Obama? Chicago politics, baby!

How does Obama’s foregoing a premium corporate gig for a shitty municipal /CHI town community organizer/state senator job make him a narcissist? Surely the back-slappin’ good-ol’ boys politics you’re certain to affiliate with has more than its share of narcissists of the “f#@k-the-poor-
(or fill in ‘poor’ with women, minorities, dark-skinned Italians, all non-Anglo European immigrants …)onlyI- am-an authentic-American” variety?

This the ultimate example of using taxpayer money to fund a year-round campaign for the incumbent.

I wonder how the numbers compare: Cost for the incumbent’s perpetual signage vs. The incumbent’s campaign budget during an election year

Be careful, or you’ll be “disappeared” by the Jesse White Tumblers.

David’s point IS substantive. It’s a symptom of the power madness almost every politician has, and that almost always leads to more problems for the rest of us, though based on your links you probably don’t care and think it’s a good thing. Stay out of my life!

I think about this every time I visit a public building or drive over a bridge into another state. The problem is just as big in Ohio. Do I really need to see the Governor’s name every time visit a state park? I don’t so much mind that politicians plaster their names everywhere. What really upsets me is paying for it with my tax dollars. It should be considered campaigning, and they should have to pay to put up their name and pay to take it down when they leave office.

I think the next mayor/governor should charge his predecessor for the sum it takes to replace his face and name all over the town/state. I don’t think tax payer money should be used for that. Might be a bit late, but it’s a lesson for life.

I understand your frustration, but this post is seriously lacking the 37 signals style and quality. Very disappointed, very glad its the rare exception and not the norm.

I understand your frustration, but this post is seriously lacking the 37 signals style and quality. Very disappointed, very glad its the rare exception and not the norm.

Living in Chicago, I’ve often wondered about this. Perhaps the candidates at the next mayoral election should offer to rename themselves to Richard M. Daley in the event that they won; it’d certainly save the city a ton of money.

David, you’d probably be too busy to vote.

Hey, America had its chance last year. Ron Paul ran in the primary election, and got a lousy 7% of the vote. My wife and I are moving to Nevis now because we don’t want to live in a tyranny, with a population of ignoramus that doesn’t understand the definition of a tyranny. So, if you intend on staying in America, you’ll just have to deal with the politicians, and you’ll have to deal with 65% communist taxes, disguised as inflation, social security, fees, and other miscellaneous vacuums in which we get to put our money here. My wife and I will be enjoying 10% taxes living 25 feet from the beach. Best of all, we get to live knowing that our taxes are not spent on killing people, and making high-tech weapons.

Bush didn’t use any tax money for the war, he borrowed it from China (that’s called deficit spending, a socialist practice…deficit spending is spending money you don’t have so that you can say you’re not increasing taxes or using anyone’s tax money). So, now…wait for it…Who’s the socialist? Hmmmmm. Me thinky it Georgy Bushy…

Mike Mike, You can move wherever you want but the good old USA will still be doing the dirty work for YOU just like it does for the rest of the world. But if you can kid yourself that your somehow more noble by moving offshore, and you’re lucky enough to afford it (I guess the USA had little to do with that) then go for it bro!

@mikemike: It seems to me like I would get “island fever” on a small island. Also what’s the price of goods like since everything is imported? How is electricity produced? What is the Nevis policy on immigration? How much does real estate cost and do you own or rent?

I’d love to get out too, Atlas Shrugged style, but I’m not sure where to go. Many of the larger Caribbean islands actively discourage immigration because they know they’ve got a sweet deal (such as the Bahamas).

As for the comment on the U.S. “doing the world’s dirty work”. Well, that is not what the USA was supposed to be about. Read George Washington’s farewell address some time. He asks us to be friendly to all nations but not to form entangling alliances (or political parties… also excellent advice).

This is nothing compared to http://economictimes.indiatimes.com/Editorial/Mayawati-and-the-40-statues/articleshow/4722566.cms

Actually I think putting the office holders name on things is a good thing. It prevents them from hiding behind a bureaucracy. If you don’t like that website/bridge/park sign, you know exactly who is to blame.

I agree, this is a completely unacceptable use of public money. Glad this doesn’t happen very much where I live.

Apparently, Denmark is a utopia! Let’s all move there!

Actually I think putting the office holders name on things is a good thing. It prevents them from hiding behind a bureaucracy. If you don’t like that website/bridge/park sign, you know exactly who is to blame.

They tend to only put their names on the things you’ll tend to like like open-road tolling (in Illinois). Unfortunately there’s not a structure for “Government Waste” or “Excess Taxation” or “This Policy Promised a Lot but Delivered Nothing.”

Life is easy for me because I hate all politicians and damn near everything they do. I choose liberty.

Jason is right, they DO tend to place their mugs only on new/likable things. In fact, leaders on both ends of the political spectrum tend to focus much attention/dollars on new projects/structures, etc, because of their newsworthiness; no one gets publicity or news coverage for spending budget funds repairing dangerously-compromised bridges or for renovating an old abandoned building and converting it into a Y. Those things have little value for our blood-hungry/new-hungry public appetites.

I work in government (as a web developer) and I totally agree with what you’re saying. While there’s going to be some overlap between politicians and government (obviously), where I work there’s a clear understanding that the government site is not a politic party’s site, and both the party in power and our agency totally get and respect that.

Again, if a politician launches a project, they’re going to be at the press conference and they’re gonna be in the photos from that event. And that’s what makes sense to display a lot of the time. But having your elected officials as part of a license plate or a website banner (unless its their website) is pretty ridiculous, and I’d be peeved too.