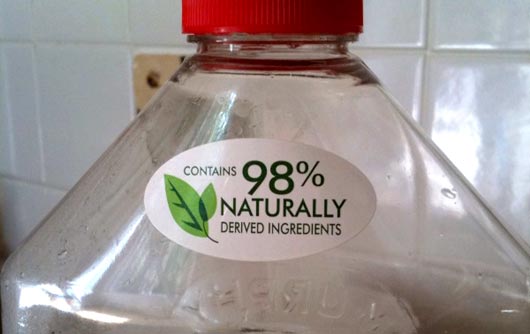 As seen on a bottle of Murphy Oil Soap. 98% naturally derived ingredients. I don’t even know how to parse that.

This Murphy bottle sticker is just one example of what I like to call “little green lies” — product packaging and advertising claims that try hard to spin natural stats on unnatural products in their favor.

LOL… this is like a daughter saying to her father: “I am half pregnant”. There are things that you cannot stay in between. You are or you are not! This gives marketing a bad name.

Much like the bottles of Heinz Ketchup that say in large letters NO SALT, and in much smaller letters, ”...added.”

How dare you question the fine folks at Murphy Oil…they have a green leaf on the label! That makes everything alright.

If you want to be abstract enough, I suppose almost everything is technically derived from nature. On an atomic level. Plastic is derived from oil, which is a part of nature.

I can pretty easily imagine a semantic argument at a branding meeting of some big firm where this kind of shit goes down. I’ll spare you the monologue.

So… I’m assuming the extra 2% of Murphy’s Soap is alien piss.

All petro-chemicals are “naturally derived”... that doesn’t mean I necessarily want to use gasoline to clean my floors.

And alien piss is perfectly natural, to the alien. :)

@Tom, I guess bread made only of wheat would be rather … un-breadly.

Technically, every atom in the product is naturally occurring. Why not go for 100% natural then?

“Green washing” is the term that I’ve heard.

The worse part, that 98% can include water, which will, of course, be the largest ingredient by far. Probably by where, I dunno, in the 90% range? ;)

Or, it could be 98% rattlesnake venom. Still “natural”.

Misleading and uninformative on their part.

Even weirder is that it “Contains” 98% naturally derived ingredients.

It doesn’t say that it IS 98%, but that it contains SOME ingredients which are naturally derived.

This is a great example of marketing gone wrong.

Or when raw foodists are talking about a food that is usually consumed raw… like salad :) “wait a minute…”

Another one that always gets me is bottled fruit juice. It seems that every time I shop for some juice a little off the beaten path (pomegranate/mangosteen vs. orange/apple), a quick read of the ingredients list reveals that it doesn’t have ANY of the advertised fruit juice in it, and is actually a cocktail of apple, grape, and other “natural flavors.”

This stuff really pisses me off.

Burt’s Bees is really good at this too. Every product has a percentage of how natural it is. I actually saw one the other day that was 100% natural.

I also like how companies do the “final product not tested on animals” bit. Don’t worry about how everything that went into it was.

You want a product with a nice list of ingredients? Check out Shredded Wheat. The big biscuits. I highly recommend it.

Greenwashing is also rampant in the beauty space. A client of mine runs an organic cosmetics store called Saffron Rouge, and they put up a page about ingredients here:

Since there aren’t any universal standards or regulations for organic/natural labeling, the confusion will probably last a very long time.

So… I’m assuming the extra 2% of Murphy’s Soap is alien piss.

Shhhhhhh!!! The alien piss is the active ingredient! :-P

The Green Works line of products are endorsed by the Sierra Club, which makes me believe that their claims of being “natural” are mostly credible. Though, on the whole, I wouldn’t call Clorox a friend of nature.

Yeah, in the collective of designers and developers I work in, we are seeing more and more “greenwashing” going on – lots of words, not much action.

There are a few clients that stand out as truly being pioneers in real, substantial progress in this area – without beating you over the head with it.

JakPrints is a really progressive screen-printing company in Cleveland that makes environmental consciousness a key part of their business. They just rolled out TruStick, which is pretty rad (I coded up the page)

There is also a company here that manufactures (a rarity!) high pressure calibration equipment. They are doing some awesome things with solar power, you can see their solar output online in bar chart form!

Both businesses are in Ohio, so when you think of high-tech, “green” companies, save a little spot in your mindshare for the Buckeye state!

I’ve noticed that most grocery store yogourt actually has “milk ingredients” on the package… not “milk”... same for some chocolate milk (or guess I should say Chocolate “milk”). I’m prepared for the normal marketing gimmicks that pervade a lot of products out there, including food products, but I thought milk would at least be milk.

Ingredients are often another example of fine print that is available to the consumer but the average person isn’t going to read. Instead of giving more information to people, it instead is used as an out by companies to avoid putting things in “quotes” or outright lies on the more visible parts of their packaging.

I think this rabbit hole goes down pretty far… but I hope there’s still a chance we can get back to being authentic instead of being “authentic”.

I think the following tale, taken from the book “The Prayer of the Frog” (Anthony de Mello), comes handy:

A man was arrested and taken to court on the charge that he was adding horsemeat to the chicken he was serving at his restaurant. Before passing sentence, the magistrate asked what proportion of horsemeat he was adding to the chicken. On oath the man said, “Fifty/fifty.” After sentence had been passed, a friend asked exactly what “Fifty/fifty” meant. The man replied, “One horse to one chicken.”

Natural has no legal definition. Whatsoever. Everything including man made materials can be labeled natural.

I understand what they wanted to do here, but to be honest all they did was to make me curious about the remaining 2%.

Maybe it’s like when one of the actors playing James Bond said in an interview, that he slept with all the Bond girls from the movies except one, but he refused to say which one. This way if someone points out that there’s something obviously man-made in it (like synthetic polymers that literally don’t exist in nature) they can say it’s part of that 2%.

If you liked this post by Jason Fried, you’ll probably like reading Sirius + StarLightXM + Airport Express + Airfoil = Streaming satellite radio anywhere in your house, Getting Real, the book, now comes in three flavors, and Question your work