“Off the Chart” talks about how recent unemployment rate predictions turned out to be way off the mark. The reason: “Reality has produced numbers of its own.”

And that’s the problem with projections. Reality is a terrible collaborator. No matter how much you try to work with it, it has a mind of its own. And it never listens to you.

Plus, it’s easier to be a cheerleader than a doomsayer — especially when you have a vested interest in the outcome. That’s how people wind up in an overly optimistic fantasy world. No one ever submits a business plan to an investor that says, “This probably isn’t going to work.”

Next time you see someone with a plan or chart with made up projections, imagine it also contains unicorns and dragons. It might as well. 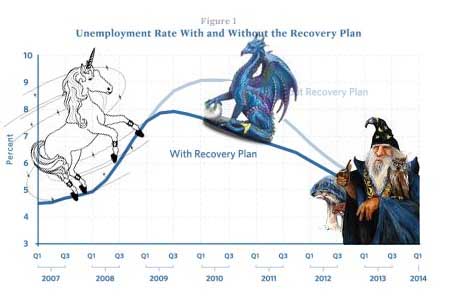 i think if you have lightning and sparks coming from the wizard, fire from the dragon, and a rainbow from the unicorn, you can pretty much convince anyone with the graph above – just change the main and axis title’s for your needs.

You didn’t put enough thought into the placement of your fantasy creatures and are muddling your message. For example, the dragon should be sitting on the “without recovery plan” line (scary!), the unicorn should be at the right of the graph (it all ends well! Sparkly!), and the wizard should be at the left of the graph, because he represents the financial “wizards” whose plan will make this all possible.

But a good first effort, overall.

I laughed out loud at the chart – your point is so very true. Any kind of prediction should be taken with a grain of salt, especially any that lie significantly in the future. There are simply too many events that can (and will) happen between now and then to assume that anything will remain constant.

Nassim Taleb talks extensively about this in his book The Black Swan (a must-read if you haven’t already) – most of the major events that have had significant effects on the world were completely unpredicted (and unpredictable), and yet we constantly rely on predictions and projections because they usually tell us what we want to hear.

Don’t forget about leprechauns. What’s a good forecast without a leprechaun?

@Don: I totally agree. Next time put the fantasy icons in the right place for goodness sake!

The projection and projector are the same. Reality is what you make it. These comments are no more real than anything else. Life goes on.

I agree, and I think that it’s ridiculous when people produce projections and don’t think about the model’s sensitivities and assumptions. At best, most often they should include likely ranges and explain any meaningful assumptions on which the projections are based.

But I also don’t think the issue is worth despairing over if it leads to doing no analysis/projections. There are lots of cases every day where a little hard-nosed research and strong analysis have helped to avoid catastrophe or to choose the best path forward based on the information available.

So I agree with you that we should know and admit to the limitations of forecasts and decision analysis. I would just hate the idea that entrepreneurs and analysts might give up in light of these limitations! What do you think?

The real sticking point is the complexity of what you’re trying to predict (world stock market vs. bake sale revenues), and the ability to clearly see and understand the underlying assumptions of the model, and how they map to past measurements of success.

I don’t think anyone would seriously consider investing in a project that didn’t make some prediction about the future? I’d love to see someone tell an investor: “I think its going to work, but since predicting the future is impossible, I can’t give you any numbers or provide you with my assumptions as to why.”

My favourite charts are the kind with three legs that you very often see in the Financial Times and the likes. One leg is in 2008 (i.e. a number hopefully based on fact), one leg is for 2009 (i.e. a number based only in part on published figures heavily bolstered with estimates) and one is for 2010, proving the point of whatever the article is about. And of course the chart looks like an exponential curve…

Well, when you add in political motivations (e.g., wanting to get some bill/plan passed), these “projections” can become even more suspect and should be taken with an ever larger grain of salt.

Is there any more ways to rephrase “Don’t plan in advance”?

@CRC, I am not sure political projections are any different from their private sector cousins. Like, I want to get funded, or I want the boss to open another manufacturing plant in my district, etc.

No doubt projections are often intended to persuade, which is why it is incumbent on the person reading the projections to demand the underlying assumptions (or at least unicorns, to Matt’s point!).

projections are only as good as your assumptions, and quite often wrong—it’s true. But the exercise of creating projections is incredibly important and helps you understand the assumptions and pressure points of your business.

Yes, we can all laugh at the results, but that shouldn’t give people the opinion that they should ignore the process.

I’m not sure if you are indicting the creators of the stimulus-supporting employment projection for fraud, or if you’re exonerating them based on the premise that they did their best and there was no way to know they were wrong.

Considering that they got 800 billion dollars for themselves and their friends by publishing this particular chart, I hope it’s the former.

The biggest problem with public projections is an often unwillingness to share the underlying assumptions and open them up for criticism.

Any chart presented within the context of a PowerPoint presentation earns +10 credibility.

I wonder where the unicorns and dragons should go on global warming projections.

Laugh all you want, but in corporate world that’s how investment works, that’s why billion cap companies like Gartner and Reuters exist – cause majority WANTS to see unicorns and their charts.

Love the quote: “Reality is a terrible collaborator”. How true. Classic.

With regards to Global Warming, the consensus of scientists and enlightened politicians who fund them matches up perfectly with our sophisticated computer models. Don’t be fooled by the skeptics who insist on evaluating actual measurements!

Its funny, but no one’s mentioned the mushroom yet..its clearly influencing the Wizard’s Recovery Plan and might be why the dragon sounds like Sean Connery.

It isn’t that you can’t plan ahead at all, it’s just that the more ‘micro’ your projections, the less likely you are to be right. Global warming is pervasive enough that you can evaluate the environment over time and refine your tests, to make reasonable guesses about what will happen over the next hundred years or so. Plus, global warming has science behind it – ‘the market’ has none.

There is really no comparison between global warming ‘planning’ and economic planning.

“Plus, it’s easier to be a cheerleader than a doomsayer” Wrong, and proof is simple to find: look at how modern day news media works. People are always looking for a good scare.

The fact is, people are biased and should not be trusted to deliver raw data. That’s both our strength and weakness. Projections are useful, but not infallible.

Greg Mankiw, an economist at Harvard and former chair of the Council of Economic Advisors, blogs about this unemployment graph every month when the new numbers come out. Here’s the same graph with the real unemployment numbers plotted on top:

“Prediction is very difficult, especially of the future” – Niels Bohr

If you liked this post by Matt Linderman, you’ll probably like reading Quote: The danger in relying on [sophisticated virtual…, [Screens Around Town] .Mac, Twitter, Swerve Festival, and 37signals podcast hits top 10 at iTunes