This month’s Inc. cover story: Jason Fried on how to get good at making money. 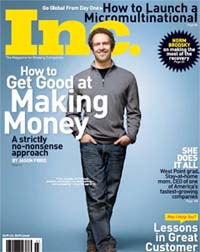 I got FileMaker Pro (I paid for it with the stash I’d saved up selling stuff to my friends) and started messing around. After a few months, I had solved the problems I had with organizing my music. I knew what music I had, where it was, whom I had loaned it to, how much I paid for it. The solution was elegant and easy to use. I called it Audiofile…Before making it available to other AOL users, I added a limit in the program—people could file 25 CDs for free; after that, it would cost $20 to unlock Audiofile and remove the limit.

I remember my first customer. One day my parents gave me an envelope. It came from Germany and had those airmail stripes at the top. I opened it up, found a screenshot of Audiofile printed on a piece of paper—and a crisp $20 bill. More envelopes rolled in. Over the next few years, Audiofile probably generated $50,000—not bad for a kid in college in the early ‘90s.

The lesson: People are happy to pay for things that work well. Never be afraid to put a price on something. If you pour your heart into something and make it great, sell it. For real money. Even if there are free options, even if the market is flooded with free. People will pay for things they love.

Great article! I love that it’s about a “real” profitable business.

That is a great article Jason. I really like the idea of buying/selling on Craigslist or eBay. I use to do that with musical instruments on eBay. I think I ultimately broke even, but I got to use some really cool instruments on an album I was working on.

I am going to try a lot of these tips. Thanks.

Great article Jason. As someone who has started a few companies I agree with your premise about bootstrapping…even if you have the money where it isn’t technically needed.

Every time I have tried to leapfrog a learning step by dumping money into a venture I have had my proverbial tush handed to me. Thanks for reminding me how to do it the right way!

(to fix broken link, sorry for the double post)

selling stuff to my friends

As someone who’s been building a web app for the last six months, I can attest to the need for such an article. I was a fan of 37signals before I was interested in building a service, so I began with good ideas right from the start. However, even with my strong belief in bootstrapping and charging for a product, it feels weird to put a price tag on a web service. I always think, “Is this really worth $4.99/mo?” And there’s a small feeling in me that says “No” (The users of my site will answer that question for me). I think one of the many reasons so few online businesses actually have a revenue model is because there’s a stigma against charging money for web software. It’s a stigma that needs to be overcome.

How many more articles are you going to write for Inc.? I find these quite informative on topics that aren’t typically discussed in business articles often and would like to look forward to more.

That article has some great information in it. I forwarded it to my sister who is always wondering how to start a business and make her own money. I really like the last paragraph where you give the reader something tangible that they can do to start practicing the art of making money.

I really liked #3, the whole section on “Charging for something makes you want to make it better.”

One of THE best business articles I’ve ever read. I started reading Inc back in 1997 and FastCompany in 1999.

I usually toss my magazines after zipping through them. Not this one. I’m cutting it out and framing it.

Great article, I read your book “Rework” amazing, follow all the steps, less is more-under do your competition and thats exactly what I did with my WordPress Themes, and it took off like a wildfire, gave many of them for free, and its amazing…

The secret to any business is “scratching your own itch”

This article demystifies making money. I totally enjoyed it. Made my teens read it.

I did have one question though, do you think that anyone in today’s economy is going to pay $3500 for a single web page? I know back in the early 2000’s the price for a commercially developed website was astronomical, but I can’t imagine charging that much today for a page.

What am I missing as a web designer? Is $3500 per page still a realistic model? Whole sites are designed and developed for that now.

If you liked this Business post by Basecamp, you’ll probably like reading Video: At TEDxMidwest, Jason explains why the office…, Link: Managing Conflict, and Quote: The number one competitor we have in our…