It’s been about 24 hours since we launched Basecamp Mobile. We wanted to share the platform/device stats so far.

iOS is dominating with 84%. Android is coming in around 15%. Blackberry and webOS combine for about 1%. 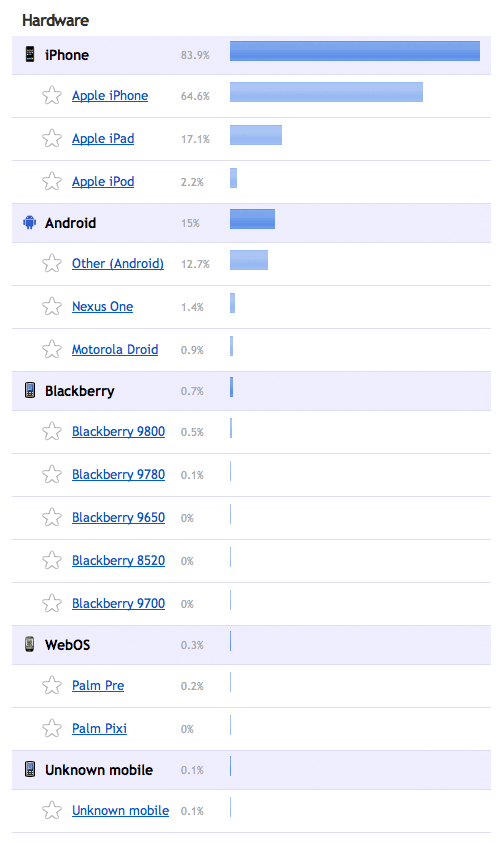 It will be interesting to see how these change over time (we’ll post them every few months or whatever ultimately seems interesting).

Do you have a breakdown of browsers? It would be interesting to see how many iOS users are on Opera (my guess is negligible) and on Android what the browser selections are.

Just the iPad alone has more usage than all Android devices. Interesting.

My hypothesis … people who are using Mobile Basecamp on the first day, are also people who activitly read 37svn. I also imagine that since this is a design / web development blog, much of the reader base own iPhone as their primary device.

What will be interesting to see is, for all of those small business who are not tech savvy, nor read 37svn, but use Basecamp – if they will ever become aware that the mobile site even exists and if so – what are they using as their mobile phone.

What stat program is generating the report?

The Windows Phone 7 numbers must have been too large for the system to register.

Interesting that the Nexus One is ahead of Droid. The N1 didn’t sell very many units, especially compared to the Droid.

If trends continue, looks like you can pour all of your development resources into iOS and Android. Too early to tell with only a 24 hour window. Well done!

At what percentage does the iPhone need to stay at before ever considering a native app? Obviously these stats are for us techies who read the blog and i’m assuming the numbers will go down. But, if the percentage stays this high – will the native app conversation be brought up again?

The mobile site that was built is actually done very very well, and very impressed with it.

Over time, this data will be extremely interesting. Down with the browser wars, on with the mobile wars!

Fil on the road

A great idea. The only “sad” thing is that i have to re-enter my login data everytime i got interupted by a call or message and have to leave the browser window. Is there a solution for that?

1) My first try with Opera Mini sent me to the non-mobile version of Basecamp.

2) My second try with the official browser gave me a SSL warning (apparently it didn’t like the redirection to Launchpad).

The first issue might be one of the reasons why you get so few hits from Android users, since lots of use use Opera Mini.

That sounds like a bug. You shouldn’t have to re-enter your login information like that. Can you contact support and tell them which phone you are using so they can help you out?

Shouldn’t the chart state “iOS” as the heading for Apple’s devices and not “iPhone”.

Having iPhone as the heading makes the chart misleading.

The chart is generated by Clicky (www.getclicky.com), so 37s doesn’t control the headings.

Getclicky is a great service that I have been using for over a year. It is similar to Google Analytics but about 10x better and real-time.

Along with Fil, I always have to re-login if I’ve closed out the browser window or restarted as with all web apps on the iPhone.

Which is why I always prefer native apps that let me save my login information in the app for all my accounts, and then simply use the alphanumeric passcode on the iPhone for security.

Hopefully, these numbers show what 37Signals are really using and doing. And then it will be up to 37Signals whether to meet those needs or use the Apple approach of doing what they think is best and attempting to change users habits to fit their mold.

Sure a native app would be better for users, but maybe 37Signals is pushing us into a solution that will be better for the future. Like on the iPhone, a physical keyboard is still a better option for customers than an onscreen keyboard for users. But realistically, Apple knew a physical keyboard would be too limiting so pushed us into a worse experience for the overall greater experience.

Its too bad BlackBerry users on versions older than OS6 can’t access the mobile version. Is it at all usable on OS5’s browser?

Any way for a user to force the mobile version it to display on OS5?

Matt, when we first started tracking hardware, it was still called “iPhone OS”, so that’s why they’re grouped together under the heading of “iPhone”. We just haven’t updated it to be “iOS” yet. Of course, we should get around to that! But we don’t consider it to be super high priority at the moment :)

To go native or go web? For a business it doesn’t even seem like a question that needs to be answered, unless you want to spend your dollars trying to keep up with the next app os platform. We recently did a web application for a client wanting to use their iPad/iPhone choosing to go the web route. Fast forward 2 weeks ago, one new owner of the company with one shiney new droid and one application that still works, no changes.

We are currently following PhoneGap closely, which looks like they will give us the access to the onboard devices that end users want applications for. Throw Sencha on top of that and you have native looking web applications that stand a chance against true native apps.

It would be interesting to compare these figures to API usage from mobile devices. That would suggest which platforms have native clients that people are satisfied with, and which don’t.

I have a great smart phone with a pretty decent browser (that’s neither iOS or Android) and Basecamp still works great for me. Thanks for stepping back to consider everyone else.

I actually think with the proliferation of mobile platforms, web is the best/safest way to move forward.

Although by no means am I an expert compared to some of you guys, what I get from this, if you’re considering native V web based.

1. Make a web based app, cheap. Deploy. Satisfy 98% and probably 100% of the market by shipping something.

2. Intensely delight a potential 84% with a faster, feature rich native app on iOS.

Either way, you win.

Of course, these numbers include some fan/design/other bias apropos what others have said about readers of this site, but the numbers are still informative.

+1 Sencha and Phone Gap comments. I have a web app on my development plot and these guys look the goods for making a native-like web app.

A mobile version of Basecamp?

I was very excited to have a mobile version of Basecamp until after visiting the site I found out that they left out tracking time. That’s the feature that would have been the most helpful from my IPhone.

Hey guys – I just started using it today and just have to say it’s gorgeous! I love it! Another smash hit!

It works pretty great on my Nexus One. I do agree with some of the other posters that it would’ve been awesome to see time-tracking and the ability to select who to respond to in a message thread, but I’m still impressed.

I do have to say that responding to a message is buggy; whenever I touch the form to type a response it kicks me back up to the top of the page, hindering the view of what I’m actually typing.

We are best company in India for of more than 3 Years in the market. We have a best clientele and have catered clients in Reality, Personal Portfolios(Personal Websites), Economy Portals (C-Commerce and Shopping carts based portals), Nature based portals for NGO’s, Websites for Financial houses, Community based website, Travel Based Websites, Education based website for students and so on, the list is on and is still increasing.