Exit Interview is a Signal vs. Noise series that talks to founders to see what happens after companies get acquired.

In October of 2006, Conde Nast’s Wired Digital bought online news aggregator reddit.com. “Our goal will be to build reddit as an independent company by collaborating with Wired through the integration of its core technology, and by offering partnerships to allow other companies to do the same,” Kourosh Karimkhany, general manager of Wired Digital at the time, said in a statement.

Alexis Ohanian, co-founder of reddit (right), stayed at the company for three years and then departed in October of 2009 saying, “It’s shocking to see how far the site has come.”

Below, Ohanian discusses how he feels now looking back at reddit’s path.

How do you feel about the acquisition of reddit?
I had so much going on in my life that I felt relieved more than anything else when we sold reddit. The site materially changed my life in a lot of ways, but I’m really proud of the three years Steve Huffman and I spent there after the acquisition. We could’ve comfortably left day one, but I know I personally was going to do my entire term because at the very least I owed it to my new employers that they get their money’s worth and to ensure the community that did so much for us. Plus, it was still lots of fun.

Fortunately, they were very interested in not screwing up a good thing, so I enjoyed a tremendous amount of freedom and we were largely left to guide the website as we saw fit. I was always dabbling in other products that I’d farm out to talented redditors I’d contract development of small projects to — things like reddit.tv we could tie into advertising deals without ruining the purity of the reddit.com experience. That particular site was built by a redditor named TriteLife for me, but has since been entirely rebuilt by a volunteer redditor who missed it so much after its run ended that he wrote a new one himself.

There have been bumps along the way, for sure, but we weathered some really rough economic times without ruining the user-first approach to product that keeps the site nearly ad-free (and when there are ads, they’re not obnoxious). Off the top of my head, I can’t say that about any site as big as reddit save Craiglist, which is a rather exceptional site.

What impact did the sale have on customers?
All things considered, our users have only gotten more and more freedom since we were acquired. Since then, things like user-created reddits have brought to life everything from /r/colbertrally to /r/IAmA — absolutely fabulous ideas and executions that none of us on team reddit could’ve dreamed up.

Furthermore, we open-sourced reddit after a meeting with Steve Newhouse where he mentioned something he’d seen on the “3 year product plan” we wrote up when we first joined; he wanted to know how soon we could open-source the site.

How do you think reddit is doing now?
1 Billion pageviews in the last 30 days is mind-blowing, frankly. Now that reddit has become a springboard for what the Internet is talking about (and what the media are talking about after that), there’s great value there that doesn’t quite have a revenue model to match it — yet. 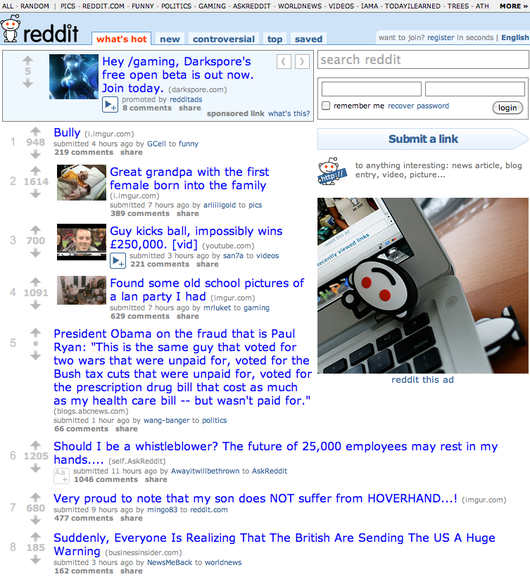 What are you working on now?
I’m also the marketing dude at Hipmunk. I crashed with Steve [Huffman] and Adam [Goldstein] a week before their launch to get some basic UI stuff together, design a brand, and prepare the launch. So far so good with taking the agony out of flight search.

Breadpig! My uncorporation that creates geeky things (we published xkcd: volume 0 and invented LOLmagnetz, for instance) and donates all the non-sustainable profits—over $175,000 so far!). It’s like a Newman’s Own for nerds.

And some speaking gigs here and there. I’m mostly just anxious to get my gaming rig back from SF (I’ve moved to Brooklyn) and finally catch up on SCII.

Alexis is the man. One of the real good guys in the Internet tech community. I’m so happy to have him in New York City now and to call him a friend!

I first came across Alexis at Christmas time last year when he left a really nice comment on a blog post I did recommending LOLMagnetz as an ideal nerd’s festive gift. I didn’t realise at the time that Breadpig was such a worthy cause. After doing some research Alexis soon became my tech hero (after Tim Berners Lee). If you haven’t seen it, his TED Talk which explains Social Media in 3 minutes is a must see. Thanks for posting the interview.

...and now rage comics popularized on reddit are making their way into Rails commits!

I have to say I was expecting to read this and hear all about how horrible the acquisition was and the creativity that was stifled, etc. Basically stuff in line with the typical 37s schtick.

What a refreshing read. Your credibility score just went up with me, at least.

Yes, very refreshing read. It is great to see a purchase of a small startup by a bigger company not go to the dead-pool.

Congrats to the reddit team for such a successful exit. I tend to agree with most of the view points from David and Jason, but it is tough to say this was not a success.

Interesting, very interesting… This interview doesn’t mention the complaint from last July that Nast wasn’t giving Reddit enough resources, leading to the creation of Reddit Gold, a paid service. It was thanks to actual paying (and loving) users that Reddit has been able to grow its infrastructure and hire developers in the past few months. To be fair, in the blog post announcing Reddit Gold (http://blog.reddit.com/2010/07/reddit-needs-help.html) it looked like Mike Schiraldi understood why Nast couldn’t allocate so much to Reddit. Also, I believe Nast is now offering more resources.

Rage comics (and pretty much every other meme redditors latch on to and milk to death) originated on 4chan.

Hi, everybody! Thanks so much for the kind words.

@Dmitry Yes, it was a challenge for the team after Steve & I (the founders) left, because reddit didn’t have as much clout within the company. But as you point out, that’s since changed quite a bit and they’re definitely getting the resources now (I’m an advisor).

@Spencer Why thank you, Bao-friend!

@Paul Whoa! Just being named in the same sentence as TBL is all kinds of generous. Thank you. I still think I’ve got a loooooooooong ways to go, but now I can’t let you down ;)