I love taking pictures of signs on signs. They usually point to bad design (literally). Here are some of the ones I’ve taken lately. 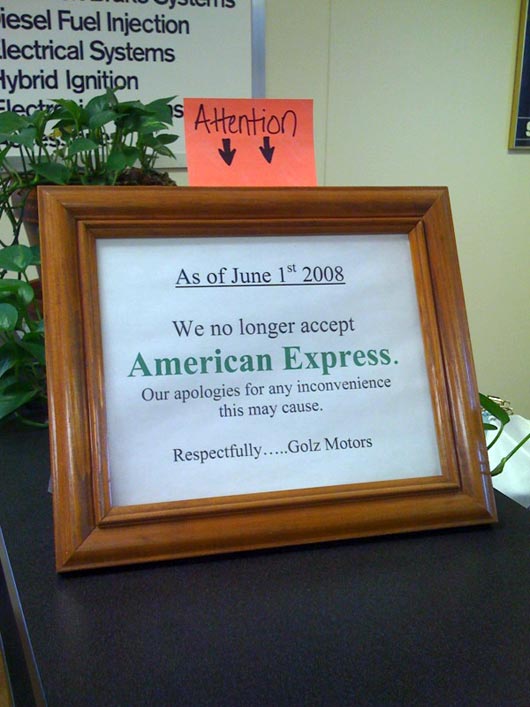 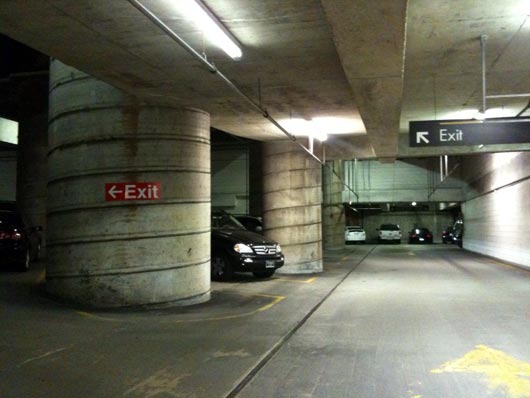 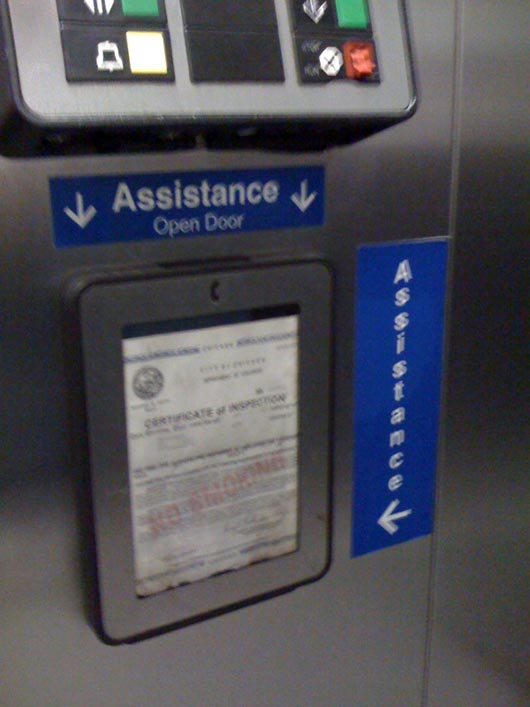 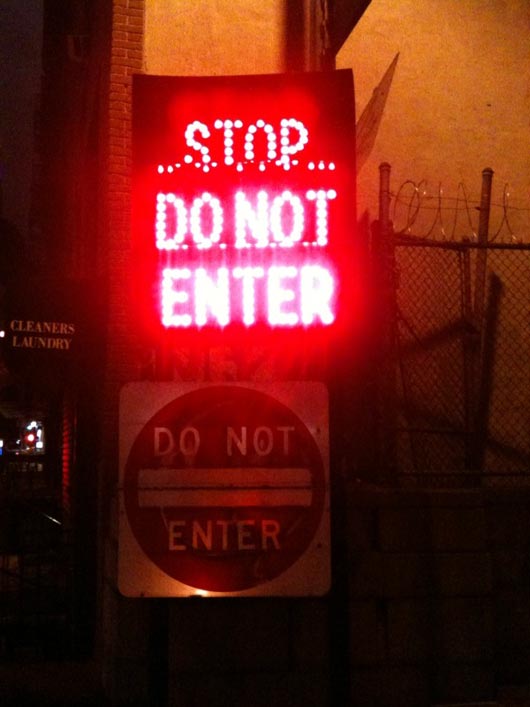 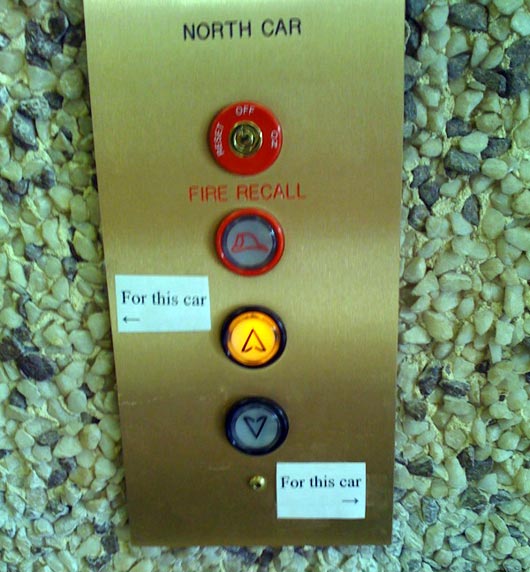 UPDATE: I’ve created a Flickr group called Signs on Signs so anyone can contribute beautiful specimens.

The first one is hilarious :)

wow. this is great. You should start a gallery of user submitted “bad sign designs”. It would be great to see terrible signs from across the country.

Yeah – sounds like a really popular Flickr group in the making. I would be a regular contributor.

Brad: I’m considering it. My fascination is really with sign duplication and/or little hand made signs that have to go on other signs to explain what they mean. Pretty niche interest, but I’m sure there are thousands of examples out there.

The elevator one is particularly awesome. I’m still not sure what they mean. They need an additional sign.

Why do elevators in buildings with two floors have a 1st and 2nd floor button? Why not just a “Go” button?

I love these. I see these kinds of signs all the time, I should start cataloging them.

Here is one, Muni trains in San Francisco have so many signs and most of them are all-caps bold with bright red all over. There is usually around 25 signs in my field of vision, all yelling at me.

Ok, just created one: Signs on Signs on Flickr.

@allan branch – they want to be ready in case they add another floor :)

You could hit up @rfelix and create something similar to what he has going on with http://notaparkingspot.com/ (Rails app, with iPhone companion) for “design/usability fails”. :)

The illuminated and reflective sign case may just be an abundance of caution, if it was an outdoor location. If there was nowhere ideal to place the reflective sign, then it won’t be clearly readable in headlights, and the illuminated sign above it may even be (legally) necessary for safety reasons.

Likewise illuminated signs read less well than reflective ones during the day.

A few years ago I was in the Seattle Public Library designed by Rem Koolhaas. It was beautiful, though a bit overdesigned.

What struck me was the ugly office paper signage taped to the hugely expensive doors, walls, and windows by library staff.

Architects should learn from this and design systems for flexible signage to prevent the problem of literally tacked-on signage.

I have a pet hate for diagonal arrows on direction signs when they refer to absolute left or right. That black direction sign implies to drive into the hood of the Mercedes.

Yo should see Mexico’s!

The “blog” of “unnecessary” quotation marks is a truly great source of handmade signs, many of which modify other signs:

However, these signs-of-signs DID get you attention.

So they served there purpose.

Many times, poorly designed signs are the exact type of signs that get our attention … because our eye see’s those signs are not fitting in.

Which is why many great graphic artist, ironically, use Comic Sans as a typeface for the exact reason of it’s being a horrible looking typeface also a typeface that gets a lot of attenton.

One night they had paper signs printed on standard 8.5×11 straight from someone’s printer. They were scotch taped at the top of that ramp, you know, the part where there are large signs warning you “Don’t turn left.” The paper signs had a note that said you could not turn right.

Of course we ignored those paper signs and ended up driving in circles a few times until I decided to stop the car, open the window and read the paper note that said to get out I needed to go the wrong way. Amazing.

That parking lot is a lesson in confusing signs.

These remind me of furigana.

Yo Dawg, Heard you like signs. So we put some signs on yo signs so you can read signs while you read signs.

The last photo really disturbs me – I can’t take my eyes of the stones on the background wall. Looks like someone built the wall from chewing gum. Really distracts me and I smell Spearmint now.

Have a nice day, yeah! Oliver

Architects should learn from this and design systems for flexible signage to prevent the problem of literally tacked-on signage.

Every time I see this the FAIL is palpable.

Here in Minneapolis we’ve got our fancy, budget breaking, light rail with artistically and individually designed stations. All with 8.5×11 printed signs taped randomly on every frick’n surface that will hold them past their useful date.

These really are great! The parking garage exit signs are confusing.

@Nathan Bowers and @aczarnowski - as a person involved in the architectural sign industry, I can definitely confirm that the use of paper stick-on signs is a real problem. Often there are 2 issues at work here - poor design that restricts changeability, and an inefficient or non-existent reordering process. Often times it’s the reordering process that is the culprit.

The staff member doesn’t know how to navigate the bureaucracy to order a new sign insert, or even worse, yet doesn’t know how to print out a graphically consistent paper insert themselves. For sake of expediency, they resort to a hastily assembled paper sign taped to a wall.

I am involved with building a cool web app that is a project documentation and management tool specifically for sign projects. We are in the process of building a reorder module, which will make it easier for all involved to quickly order or create the appropriate sign inserts. Hopefully, if/when sign companies, designers, and architects adopt our system, there will be less tacked-on paper signs in the world.

@Grant there are two elevator car with separate buttons they put signs so people will not confuse which button controls which car (elevator).

I’ve always seemed to notice “signs on signs,” but never really thought about it until now.

It’s amazing how much signs lack common sense or even the most basic of basic design principles. I’ll keep my eye out for more sign on sign action to post to the flickr group!

People misused American Express and should be jailed.

Would this photo count? ;-)

Totally. My favorite is this one from big-dig-era boston:

If you liked this post by Jason Fried, you’ll probably like reading Quote: “I could end the deficit in 5 minutes. Y…, Photo: Rejected design idea. Required someone to…, and Photo: Beautiful wine packaging from Mulderbosch…