This is a guest post by Mike Rohde. We hired Mike to illustrate original art for REWORK. Each one of the 90 essays in REWORK is accompanied by an illustration that captures the key message of the essay. We asked Mike to share the illustration process with you here on Signal vs. Noise. This post is part 1 of a 2-part series. Part 2 will be posted within the next few weeks. 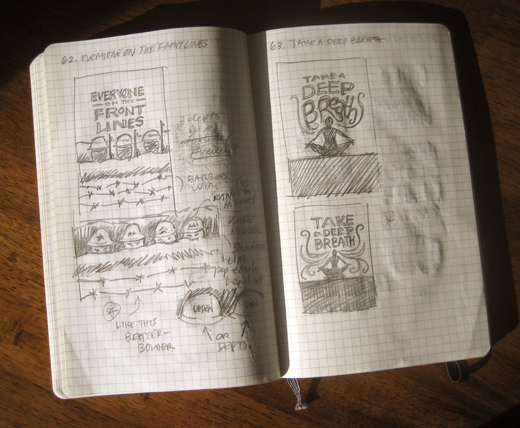 Photo of sketches in my Moleskine notebook, featuring “Everyone on the Front Lines” and “Take a Deep Breath” — two illustration concepts for REWORK that are ready for inking. –Photo by Mike Rohde Photo of the opening spread of my sketchnotes from the SEED 3 conference, June, 2008. –SEED 3 Sketchnote Set on Flickr

It was important to me to keep in contact with Jason after my sketchnote work at the SEED 1 conference. Our first contact opened the door to two more sketchnoting opportunities and ultimately led to the REWORK illustrations.

No Time to Waste

When Jason contacted me in September 2009, the REWORK book production process was pretty far along. The deadline for the galley proofs, a mocked-up paperback version of the book used for final proofing, was a little over a month away. Timing was tight.

Jason, David and the 37signals team felt the art created by the publisher didn’t quite capture the personality originally envisioned for the book. They sought something loose, sketchy and hand-drawn to capture the tone of the essays. Something like my sketchnotes.

With a tight galley proof deadline approaching, we had to convince Crown Publishing, that creating new art for all 90 REWORK essays was a good idea.

Our strategy? Create several sample illustrations, drop them into actual book page mockups so the publisher could see the proposed art in context.

Our plan worked. Crown loved the sketchnote illustrations. I was given a green light to create as many illustrations as possible before the galley proof deadline in early November.

One of the most valuable moves we made was gaining direct access to the production team at Crown. Jason connected me with the project’s production artist, who provided details on page size, trim, gutter and safe zones.

The production artist also verified illustration resolution and suggested I add additional margin outside the trim area of each illustration. This was key, as each page in the book required a slightly different horizontal positioning to account for the book’s binding.

Leaving more margin on the edges of each piece allowed the Crown production team to adjust each illustration to fit the book’s precise binding specifications.

Once the project began, we immediately moved from email messages to a new Basecamp project. Having Basecamp as a central hub worked great for sharing ideas, discussing changes, managing milestones and much more. Most importantly, Basecamp freed me to focus on the task of illustration.

Initially I’d planned on inking each illustration in a Moleskine sketchbook, making the reviewable artwork as close to final artwork as possible. But after thinking about what would best suit the review and feedback process, I decided it would be smart to review uninked pencil sketches instead. 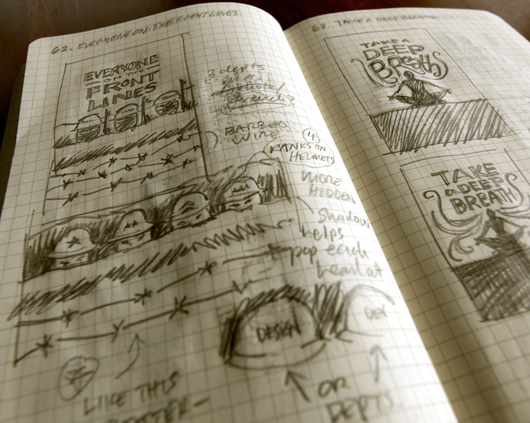 Pencil concept sketch for “Everyone on the Front Lines” from my Moleskine notebook. –Photo by Brian Artka

This proved to be a time-saving decision. Had I inked pieces as near-final art, I would have lost time re-inking multiple illustrations to accommodate changes.

Because I invested up-front time in solving the illustrations as pencils, I only had to ink once before moving to Photoshop for final artwork.

Jason started things off by providing a list of about 25 chapter titles to sketch from. Some of the titles came with very descriptive ideas on the imagery 37signals were seeking, while others were completely open to my interpretation. 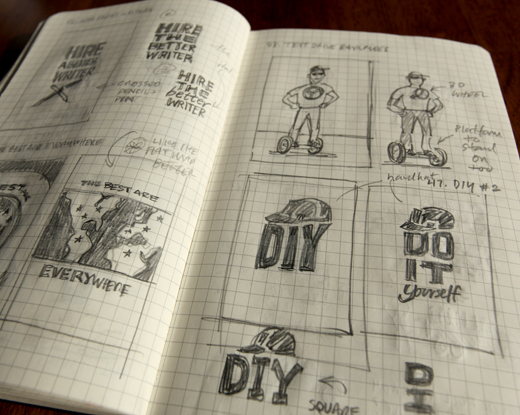 Pencil concept sketches for “The Best are Everywhere” and “Test Drive Employees” from my Moleskine notebook. –Photo by Brian Artka

Using a large Moleskine gridded notebook, I began sketching out batches of numbered pencil concepts with notes included within the sketches.

I intentionally left thoughts and comments as I was sketching, to help me remember my thought process. I was able to use those penciled notes later as a reference for creating detailed comments on each message. 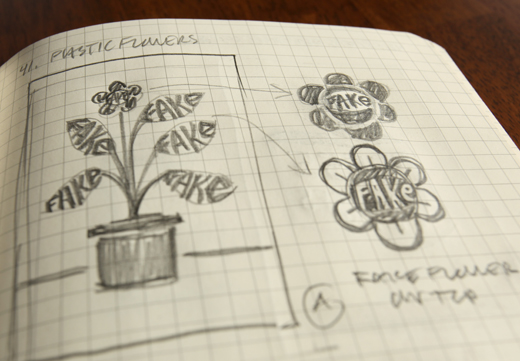 Pencil concept sketch for “Nobody Likes Plastic Flowers” from my Moleskine notebook. –Photo by Brian Artka 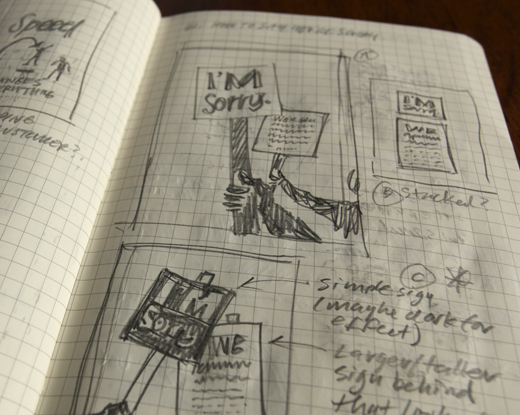 Pencil concept sketch for “How to Say You’re Sorry” from my Moleskine notebook. –Photo by Brian Artka 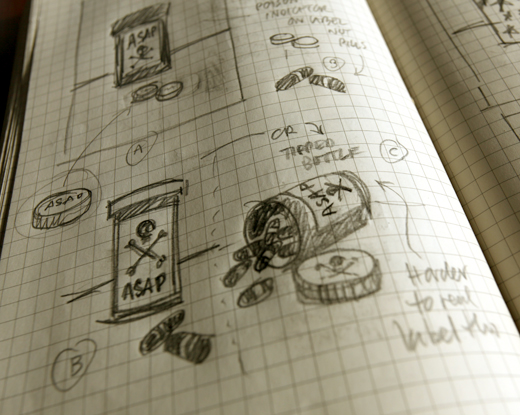 Pencil concept sketch for “ASAP is Poison” from my Moleskine notebook. –Photo by Brian Artka 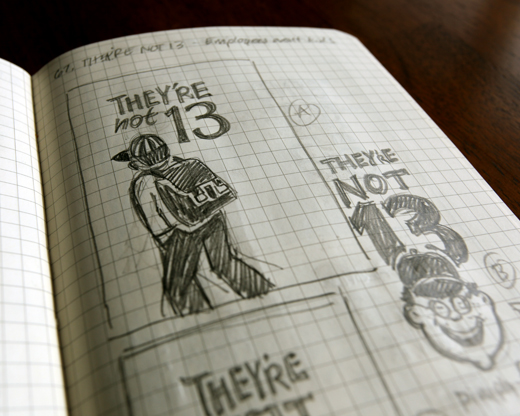 Pencil concept sketch for “They’re Not 13” from my Moleskine notebook. –Photo by Brian Artka

Once a batch of 10-20 pencils were completed, I scanned and posted in a new Basecamp message with detailed commentary.

This combination of sketches and descriptive notes helped communicate my thoughts with Jason and provide a quick way for Jason to review, approve or add feedback in the comments of the message. 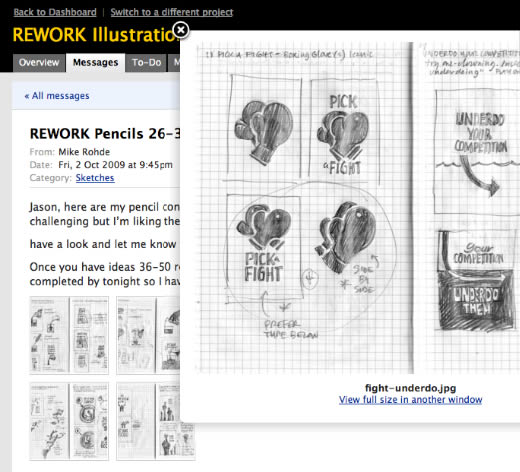 Jason and I would typically go back and forth on batches of sketches until each individual essay concept was finalized. A few times during the concepting process, it became clear that a new sketch would be needed to truly capture an essay. I would sketch a new idea in my sketchbook, scan and post the revised sketch with comments for Jason’s review and approval.

When a decent batch of pencil sketches were completed, I would shift gears and move to inking the illustrations for production.

In the next post I’ll go into depth about the inking process, production work in Photoshop and the workflow used to produce and process final inked illustrations for REWORK.

Brilliant stuff. Just pre-ordered the book about an hour ago and now I’m even more excited for it to arrive. :-)

I’m surprised you even considered inking the original line drawings before getting final approvals, that would have undoubtedly been a time consuming decision.

Did you create separate message threads in Basecamp for each chapters artwork?

What was the most difficult part of the whole process?

I threw out all my lined notebooks, and nowadays I only use sketchbooks with big text, fonts and pictures to demonstrate ideas.

Can’t wait for my copy to arrive.

Mike is a long-time friend and compatriot in the tech scene in Milwaukee. One of the more talented designers I’ve had a chance to spar with. I couldn’t be happier for him or prouder of his work. Great job, Mike!

David, Victor & Richard thanks guys! As Jason said, we’re kicking around posters. If they happen you’ll hear about them here first.

Chris My initial thought was to capture the essays as real-time sketchnotes, if they were captured at a live event. In the right setting I think that approach would have been faster. However, knowing we would need discussion on many of the ideas and edits in production, a pencil to ink approach made more sense.

Regarding Basecamp threads, in the screenshot of Basecamp you can see how I batched sketches to keep the messages to a minimum. I wasn’t so worried about separating chapters as I was about regular batches of ideas.

The toughest aspect was having a baby girl on October 15th, literally right in the middle of the project. :-)

Phil I really appreciate your kind words. I’m very proud that my SEED 3 sketchnotes had such a positive impact on you. One of my goals is to encourage people to give sketchnoting a shot, thanks for helping me to fulfill that goal!

@JF – I as well would love to see posters! Thought about that the first time I saw the sample artwork.

ASAP is poison has permeated the way I deal with the spectrum of contractors and interns. Great work Jason and Mike.

@JF: regarding selling posters, I like the idea. It is a bit like Gaping Void by Hugh Macleod. I am a big fan of his cartoons! You can also prepare some freebies so we can print them and put as manifestos in our offices. Hugh has done it recently by giving away his “Remember Who You Are” cartoon.

I second the request/interest in poster-sized prints of Mike’s work. I could see one or two in my office…

This is great, Mike. I’ve always wondered about the inking process and best practices for digitizing sketches, so I’m looking forward to the next post!

Very interesting. Thanks for sharing the behind the scenes stuff. Looking forward to part 2 and of course to ReWork!

Fantastic work, Mike. These look really amazing, and I can’t wait to see them in print. I’d also like to express my interest in posters ala Gaping Void.

Awesome sketches! Really cool to see the initial work. Thanks. Can’t wait for the book!

Thank you Jason and crew for having Mike sketch these for Rework. The sketches rock. Mike rocks. I’m glad he could have the opportunity to represent Milwaukee and further represent the Midwest as a serious creative hub of this country.

Based on the sketches, the book looks to be another game changer in the business world and a great resource to keep around while the naysayers keep holding onto the past. Keep it up guys; thanks for the inspiration.

PS(Mike: thank you for the photo credits; I’m glad I could help with that)

Looks like Victor P has some royalties coming in ;) JK

Great stuff. Should have had him to the cover – so boring!

Will the Kindle edition have the illustrations? Is it formatted more DX friendly or plain vanilla Kindle?

Thank you @KevRoN @John @Matt @Frankerson @Larry @Montreux @Brian @Dan @Fred for the kind words! I’m happy to hear you enjoyed the article and the sketches.

Thanks for sharing. a site has been designed, very nice congratulations

I actually bought the book to see the illustrations! I mean I want to read it too but this post made me look up the list of chapters and it led to pre-ordering it!

You should ask 37signals to give you some commission. :)

If you liked this post by Basecamp, you’ll probably like reading New page layout for Highrise contacts, Quote: Great proportions melt away impurities in…, and Quick posts