The First of Elvis [Vanity Fair] is an interesting profile of photographer Al Wertheimer’s days of shadowing Elvis Presley in 1956, the year Elvis-mania hit. Wertheimer describes what made Elvis different:

“He dared to move,” says Wertheimer. “Singers just did not move onstage in those days. You stood there like Frank Sinatra or Perry Como, and you sang from the waist up. Elvis broke all the rules. He moved his hips. He charged the microphone. He was introducing something that was just not acceptable to grown-ups and the more conservative groups. I have the William Morris guys getting him into a corner, and they’re giving him advice: ‘Now, Elvis, look, you get up there, you sing your song, but don’t move too much.’ Elvis dutifully listened. He wouldn’t argue with them. But once he got onstage he did what he wanted. And it created such a sensation. Not because you could hear him sing—there was too much screaming going on. The kids loved it. And the kids were the ones who bought the 45s.”

Funny to imagine those experts sitting Elvis down and telling him that he’s got to stop moving onstage. Shows you the problem with blindly following experts: They’re experts on the past. No one is an expert on the future.

Often, people “in the know” try to fit you into a mold of what’s come before. If it’s foreign, strange, or new from how they’re used to working, they’ll tell you it’s wrong. But innovators know to follow the screams, not the William Morris guys. 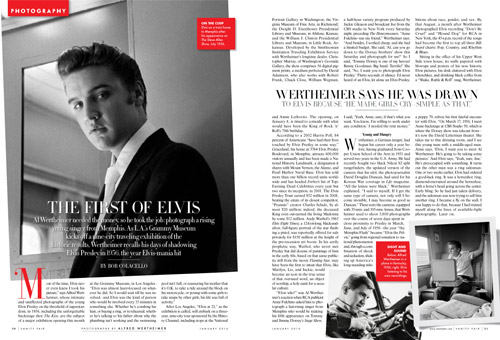 It just means it’s something they don’t understand.

Or maybe it’s a bad idea.

Shows you the problem with experts: They’re experts on the past. No one is an expert on the future.

=> People who know the most about a subject aren’t the most qualified to talk about that subject.

Following your own point, you should probably stop talking about business.

Daniel, I’m just saying you shouldn’t blindly follow the opinion of the establishment experts. The people who “are the most qualified to talk about a subject” don’t ALWAYS know what’s the right thing to do next.

Matt: You’re implying that experts (i.e. the people who know the most about a certain topic) somehow can’t be trusted to give their opinion about new developments in that topic which they happen to be an expert in.

However, the way you’ve put it, you’re basically saying that expert opinions can’t be trusted, which begs the question – whose opinion can be trusted? The opinion of people who don’t know anything about the topic at hand?

Sure, the opinions of experts are less to be trusted when dealing with a new phenomenon, but even then, experts are still likely to be the most qualified to have an opinion, most of the time.

Ah, it’s handy to be able to edit your comments!

Replying to your new response… of course they don’t always know what’s coming next – but they’re more likely to figure it out than non-experts. Which doesn’t match up with your bold statement that this single example “Shows you the problem with experts”.

Daniel, I see the experts getting a lot of stuff wrong all the time in finance, government, etc. Not saying we should ask people who know nothing about these topics. Just saying that following expert advice blindly is a good way to prevent innovation.

Anyway, maybe you’re right. Maybe if Elvis had stopped moving onstage, he could have sold even more records.

Daniel, sorry for the confusion. I’ll stop doing any edits on what’s up!

Tenner, you are an interesting piece of work brother. I’ve seen you post on here before. You seem to respond to new posts with some not very well thought out argument against what was written. If you disagree with what is said here, why do you bother reading it. You seriously need a new hobby.

I don’t believe Matt was “implying” anything. He was simply stating an opinion that experts are not always right and that perhaps there are times when it may be wise to not follow their advice.

Perhaps you should follow your advice and stop reading this blog.

In things that matter to you, you should trust your OWN opinion above all. In things that aren’t germane to your day-to-day activity accepting expert opinion blindly is just efficient.

So proofs of Abstract Algebra theorems have little to do with my day-to-day activities, so I’m willing to blindly accept whatever an expert claims about these theorems.

However, when it comes to entrepreneurial assertions/advice, whenever possible, I subject these things to the Reality Test before adopting them. Why? Because they matter to me.

I think there’s a difference between giving advice about what works/will work in the future based on what’s worked in the past and between establishing a line of conduct based on a given morality.

Without the full context of the article, it’s hard to know where Wertheimer was coming from. But just because Elvis was popular and changed the music industry doesn’t invalidate the moral argument that many people were making at the time.

I think the more insight point from the paragraph you’ve cited is that you must define success for yourself before you can decide how you’d like to go about achieving it. If Elvis was after record sales, and records were bought by young people, then clearly pandering to the preferences of adults was not the way to go…

And of course, there’s the question about whether did what he did because he was trying to be successful or whether he just happened to stumble upon success by doing what he planned on doing anyways.

Distinguish between experts with ongoing real experience versus experts who currently or have always judged others instead of doing something themselves. 37signals is an expert about what they do because they are doing it. They are spending their own money and directly reaping what they sow. Someone like Tim Geithner, on the other hand, mostly has experience spending other people’s money and fixing other people’s problems. He barely feels the results of his actions, so reality barely has any chances to correct his thinking. That’s why we don’t trust his studied expertise. And it’s the same with the suits telling Elvis what works onstage when Elvis is the one onestage.

It is possible to be an expert on the subject of sexual positions and remain a virgin. Expertise implies knowledge, but it does not necessarily imply superior judgment, experience or talent.

Knowledge is fixed with respect to context. Elvis chose a different context.

“No one is an expert on the future.”

I love this statement. Personally, I think not understanding this is why popular music has stagnated.

Creativity is being stifled for what is believed to be marketability. There seems to be an inability or unwillingness to create something new.

In fact, “marketability” is nothing but an attempt to guess at the future. Just like the experts are trying to do.

Wow! Harsh and incredibly in depth responses! I personally really liked the quote “Shows you the problem with blindly following experts: They’re experts on the past. No one is an expert on the future.” But maybe it’s b/c I work in a field w/many that blindly follow experts, that LIE, and I am constantly working to change their perceptions. The main, and simple, point I’ll be taking from this is “Go with your gut!” which is great advice we all need to reminders of.

The discussion above about heeding the advice of experts can be summed up nicely by a quote of Benjamin Grahm:

Perhaps you should follow your advice and stop reading this blog.

Yes, because it is much more interesting to read a blog where no one disagrees with the posts..

Philip Tetlock did an interesting seminar for the Long Now foundation about experts and forecasts (and why they’re wrong so often):

Why Foxes Are Better Forecasters Than Hedgehogs

But of course, everybody loves to hear failed predictions by experts, but on the other hands it’s easy to forget the times when the experts were right about stupid ideas, because it’s often obvious in hindsight.

Its one thing to disagree with posts, its another to tell the person writing the blog to stop giving business advice. If you don’t like the advice, don’t listen.

I think the more applicable argument here is not of experts, but that of applying “best practices” without consideration for individuality.

I can’t tell you how many times I’ve had a manager or someone tell me to go find the best practice of other companies for a certain project.

Not to blindly discredit the idea of best practices, but not to fully credit them either, I think a lot of people, don’t understand that works for company A works for them because they have the right blend of culture, people, personalities, products…to make their practice work for them. Company B won’t have that same mix—no matter how hard they try. Hence, bits and pieces of their practices might work, but not all of it.

Experts, I believe, have the ability to look at the appropriate best practices and past successes of a given thing, and also consider the individuality and adjust where necessary.

Elvis could never be Frank and vice versa, despite the fact they were both kings of their time. Likewise, 24 Satellites will never replicate the success of 37Signals even if they read all their books and blog posts and take them as absolute gospel.

Doctors are probably the best at understanding this, as they understand clearly that individual results may vary when making a diagnosis, even though they are based on best practice solutions over time.

Why does someone always have to jump on these posts and proclaim:

This phenomenon is called ‘tunnel vision’. Seeing things with a fresh new outlook (thinking outside the box) is very difficult once you have developped mental shortcuts that make you very competent.

There are counless examples in the course of history :

“Who the hell wants to hear actors talk?” Harry Warner

“Everything that can be invented has been invented.” Commissioner of the United States Patent and Trademark Office in 1899

If you are very qualified, you always need a healthy dose of doubt.

“What should worry us is not the number of people that oppose us, but how good their reasons for doing so are.” -Alain De Botton

It comes down to the quality of the argument being made and what it is based on. Take the time to understand it yourself and make your decision based on where you want to try to go next. Leverage their opinions and experience, but don’t let yourself be constrained by them. You may fail, you may succeed. Either way, you’ll be in better position to move forward with the next attempt.

If you liked this post by Matt Linderman, you’ll probably like reading Photo: Neat how the iTunes music store lets you…, Photo: Clever: BucketVac turns a 5 gallon bucket…, and Quote: Sympathize. “I can understand why you are u…