The final guest speaker at our recent 37signals HQ meeting was Scott Harrison from charity: water. 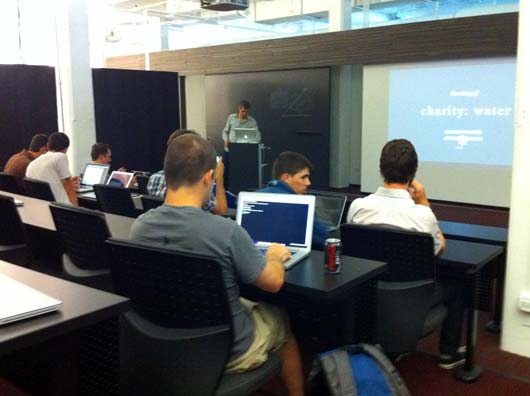 charity: water is a non-profit organization bringing clean and safe drinking water to people in developing nations. Harrison’s personal journey is compelling and it was interesting to hear how CW’s unorthodox approach, especially when it comes to branding and transparency, has helped it stand out from other charities.

Branding
CW’s messaging emphasizes cool visuals, striking videos, and from-the-field reportage. It’s more like what you’d expect from a business or publication than a charity.

For example, the image of the yellow jerrycan — often used to carry water in third world countries — has become an iconic symbol used in CW’s advertising and videos.

This image of a baby bottle filled with dirty water is also used frequently by CW:

Below, a couple examples of the stunning field photography used by CW. Looks more National Geographic than NGO. 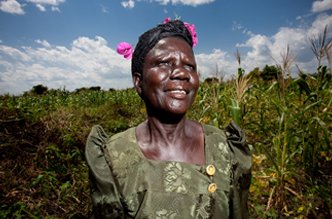 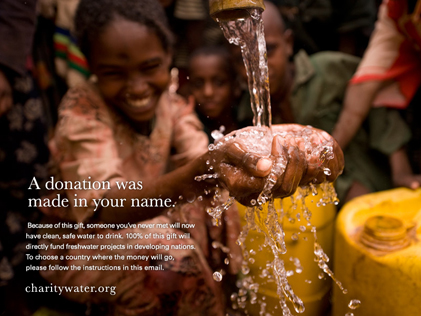 Transparency
Another key to CW’s success is that 100% of donations are used for direct water project costs. (A group of private donors, foundations and sponsors help pay for the everyday costs of running the organization.) CW even pays for the paypal and credit card transaction fees when people donate online so each penny goes straight to actually building a well.

Harrison chose this route because he felt many donors had lost faith in charities due to outsized admistrative costs. Many CW donors decide to give because they know for sure where their money goes. (It’s worth noting this policy presents a big challenge since it makes fundraising for operational costs difficult to scale.)

CW also works hard to document the results of donations. One way this is done: GPS and photos of completed projects. 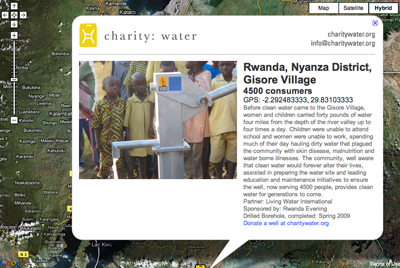 When donors see photos and videos of the communities they’ve helped, they’re a lot more likely to continue giving.

It’s a great story and it’s neat to see this kind of approach brought to the charity world. Thanks for stopping by, Scott.

Once a year United Methodists take in an offering to pay for all administrative expenses of UMCOR. That means that every other emergency offering throughout the year goes 100% to meet the needs of the flood, earthquake, etc.

Blatant Plug: If you want to give on-line to some current disaster (today it is the floods in Pakistan), consider giving via www.umcor.org. Every penny you give will go the the need. The work of UMCOR is all about relief, it does not go to doing “Christian” stuff. United Methodists do “Christian” stuff, but we pay for that separately through other agencies.

Awesome to see such a wonderful charity talked about here. I find that charities, not so much tied by profit, tend to have the most interesting stories. Toms is a good example.

Just out of curiosity, do 37s support any charities?

The charity is truly great, but when you say the 100% of donations go to programming “presents a big challenge since it makes fund-raising for operational costs difficult to scale,” I think you are severely understating the problem.

Take the organization’s IRS 990 form for 2008, which is obviously out of date so may no longer apply (you can search for Charity Global via the Foundation Center). They list that the founder pays himself just over $100,000 salary. Which is completely reasonable. But if you look at their 2008 annual report, they have 12 employees, and their spending on compensation is $419,000. Total. Which means that 11 other employees apparently are sharing about $300,000 in compensation.

This is not lean, this is mean. Especially in New York City. And it’s surprising, that awesome designers, fundraisers, program coordinators, etc. are working for so little. What happens when they are no longer 23 and 2 years out of college?

I love non-profits, and I think bootstrapping a non-profit, with transparency as a mechanism for global empowerment is awesome. But I also think it’s built on the backs of young, urban, highly driven, but ultimately burnt out employees. This is not challenging, it is (to unfortunately use the byword of the 21st century can’t-doer) unsustainable.

I don’t know how much this applies directly to Charity:water. I really don’t. But more importantly, if this is the vision of philanthropy going forward, it’s not really work you can make a career of.

Is it just me, or do both the pictures so far of the big auditorium meetings look like the people there are paying way more attention to their laptops than the speaker? I mean, why show up if you’re just going to noodle on the computer? It seems disrespectful to the speaker, and a waste of time.

For what it’s worth, the LDS Church has the same policy. 100% of charitable donations are used for charitable purposes, the church itself covers their own overhead.

They’re also one of the largest charitable organizations in the world.

In 2007 the Church responded to major earthquakes in 5 countries, massive fires in 6 countries, hunger and famine in 18 countries, and flooding and severe storms in 34 countries. In total the Church and its members responded to 170 major events—nearly one every two days for the entire year.

In addition [...] Over 1 million people benefited from Church-sponsored clean water projects in 25 countries. More than 60,500 people received wheelchairs in 60 nations. Early this year [I] participated with the First Lady of Colombia in a wheelchair presentation. [...] In 11 countries, over 54,000 individuals now enjoy improved vision. Over 16,500 health-care professionals in 23 countries were trained in infant neonatal resuscitation; they, in turn, will train many others. In a quest to eliminate measles, 2.8 million children and youth in 10 countries received immunizations. The combined effects of these outreach endeavors directly touched nearly 4 million people in 85 countries. (source)

Learn more or to make a donation.

(I’m the first Anonymous Coward, and I somehow misposted above)

The other AC said “It is just you. The presentation obviously hadn’t begun.”

To which I say, if you’re only bringing a laptop to use for a couple of minutes before a presentation, why bother?

If you are interested in the photos as well, most of charity: water’s photos are taken by Dallas native Esther Havens. Her website is full of shockingly beautiful photos. They’re fantastic in person too.

I am a professional killjoy. I’m one of the guys who runs around the world telling NGOs what works and what doesn’t. There is a LOT of research out there, I’m responsible for some of it, and I’ve looked at a fair amount of the rest.

First, nothing against charity: water. I’ve never evaluated any of their projects. I can’t speak about them and their projects. They may well be brilliant. The rest of this comment might well sound like I’m attacking them. I really am not. Citizens whose governments donate, and who donate themselves, deserve to know more about development and humanitarian work and how they work. I can provide a small bit of information.

There is a classic essay by Mary Anderson in Jonathan Moore’s Hard Choices: Moral Dilemmas in Humanitarian Intervention whose title says it all: “You Save My LIfe Today, But for What Tomorrow?”

Well-building, in general, is not poverty alleviation. Well-building can have a impact on short-term life saving, health, and somewhat increased agricultural production. Therefore, it can be incredibly important to a community. But almost no one gets out of poverty because they have a better well.

The critical issue in development work, I believe, is helping people to get up and out of poverty. Lots of NGOs (lots and lots and lots) don’t really do that. Instead they make poverty more comfortable by addressing short-term needs with little or no regard for the long-term – despite what they say. Most water projects fall into this category. (For that matter, most agricultural and microcredit do too. Sorry Kiva. I love you and what you succeed at doing, but you’re helping one person * at a time and the evidence just isn’t there that it adds up in any way.)

This by no means is to suggest that we shouldn’t build the well (though sometimes we shouldn’t). But we need to be realistic about the limitations of what we do. We absolutely cannot over claim on our work. It does what it does. If it does not address long-term issues, then we need to be forthright about that, especially with the communities where we work, and also with our donors.

The question we always need to be asking ourselves is “given our expertise and where we are and the resources we have, can we do more?” Not surprisingly, the answer is usually “yes”. Taking that answer and its implications seriously is the key challenge of NGO work. A challenge I often fail at. But I’m trying.

Martial, where do you suggest people donate money if they want to give to charity?

Pakistan jumps to mind this week.

Martial, I read your comment very attentively since I’m starting a social project in my country (Brazil) from distance (I live in the U.S.), and I’m always eager to learn from specialists like you.

I think you will be happy to learn that movements like mine are addressing the underlying causes of poverty (you can click my name to check the website).

By the way, I’m a registered donor at charity:water as well. To use a quote from my website, “The sources of poverty are multidimensional. So are the solutions.”

Martial, you’re insight is great. Do you suggest other places to read more on development issues?