Ron May, a Chicago tech-community institution, recently passed away. He was 57. Here’s the Chicago Tribune’s obit. 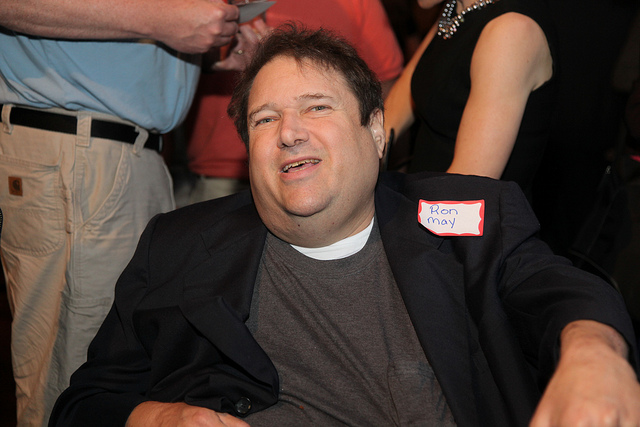 Ron ran The May Report, a long-running, unique commentary on the Chicago tech scene. The best way to get a feel for him is to check out these videos.

He was a reporter, a curmudgeon, a sweet guy, a total pain in the ass. He’d been writing his May Report email newsletter since the late 90s. He rarely missed a tech event, conference, gathering, meetup. That’s commitment.

He’d usually sit in the front row of a talk/event and just interrupt the speaker and ask questions — loudly. He wanted answers and really didn’t give a damn about decorum. No one quite followed up on a non-answer like Ron did.

He loved to get the scoop. He’d record everything with his handheld mini recorder. He’d basically shove it in your face.

A lot of people in the Chicago tech scene would talk shit about him. He was annoying, he was irritating, he’d print things that were supposed to be off-the-record, he’d rarely fact check and often get things completely wrong. Ethics wasn’t his thing. The story was.

But I really liked him. He was an original, a character, a true one-of-a-kind. He’s covered me… awkwardly... over the years — even calling me a socialist (which is hilarious) — but that was always fine by me. It was so refreshing to see someone truly interested in the scene and subjects he was covering. The May Report wasn’t just a job to him. He was really into it. He wanted to be doing this and he did it like no one else could.

This guy was curious. To me, curiosity is his legacy. And what a great legacy for anyone to have.

Ron will be missed. He even scooped his own death in his heartfelt and honest final May Report, published on June 24th. How’s that for doing what you love right up to the end? We should all be so lucky.

Jason – I think you really nail it when you said this: “This guy was curious. To me, curiosity is his legacy. And what a great legacy for anyone to have.”

I call the attribute naturally, curious lifelong learner – it is a trait that Ron, you and I have shared.

The best part about this post and this comment? Ron won’t be able to call me on the phone and rip on me for gasp complimenting you. While I’ll miss certain aspects of Ron, I hope that the occasional reclusiveness Ron unintentially fostered in all of us melts away and a new era of communication, open success enablement and mutual respect amongst the members of the Chicago tech community emerges.

A story without facts is fiction.

I always felt that while Ron was polarizing, he was also unwilling to take the usual “company line” responses from the Chicago tech leaders as the final answer. That’s good. That’s a relentless curiosity that is missing in today’s tech coverage. He wasn’t for sale as so many blogs and personalities in the tech media are today. That’s also good. Yes, his fact checking (or even reporting-to-facts) could be somewhat suspect at times, but I think he did more good than bad when its all said and done.

Bummer! How did I not know of this Ron guy before now? The videos you linked to in the post are classics. He wasn’t a plastic flower, how refreshing.

Jason, thank you for sharing this! I learned about you a few days ago from Ruby on Rails, then from there David xxxxx…. Then from him, I was able to see one of your talking and I like your style and philosophy in life, that was just a few days ago. Now I stumbled here in your blog and read about Ron May, I like him. It’s my first time to hear about this person and his unique personality. I did watch the video of him and read his blog or report too and I could honestly say this person is indeed unique and intriguing and not boring! What I just want to say is thank you I’ve learn about you and this person you are talking. You are both an interesting personality in my humble opinion. I like to learn about your products and your projects. I’m an occasional software developer or a computer programmer. Please don’t misunderstood me, I’m not applying, I just want to introduce myself. Keep up the good work and to your team!

If you liked this post by Jason Fried, you’ll probably like reading Recent job postings on the 37signals Job Board, Launch: Job Board redesign, and Eclipse Big-E-Pak: Smart design