Face Unlock is one of those features that surprises you. “Wow, this is pretty cool.” But after the novelty wears off some things become apparent: it doesn’t work very well, it isn’t very secure (it can be fooled), and you look kinda silly trying to unlock your phone with your face.

It reminded me of how Google creates these sci-fi things but doesn’t implement them very well. Often times features like these get buried or forgotten (is Google Goggles a thing still?).
Yesterday I watched Dieter Bohn’s review of the upcoming Nexus 6 device. I listened to his rundown of the hardware, the screen, how huge the device is, and how the camera’s pretty good. But there was one sentence in the review that I found puzzling. He said it so quickly—almost as an aside—that you could easily miss it:
“It’s got a clever feature if you’re looking at the lockscreen you can unlock the thing.”
What was that? Is he talking about Face Unlock? Is it different in Android Lollipop (the newest/next version of Android)?
I have a Nexus 5 with the latest Developer Preview, so I looked for some clues for this feature that Dieter Bohn mentioned. Sure enough, there it was in the Security Settings: Trusted Face. 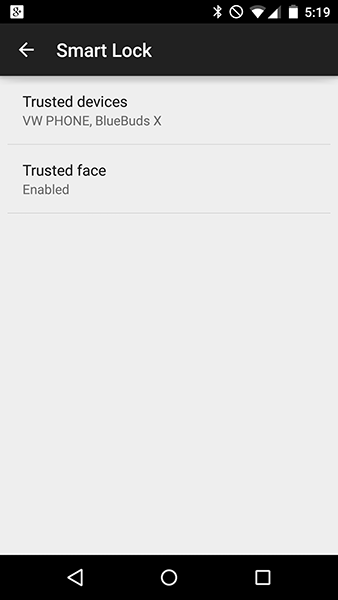 Alongside trusted Bluetooth devices, you can set your face to automatically unlock your phone. 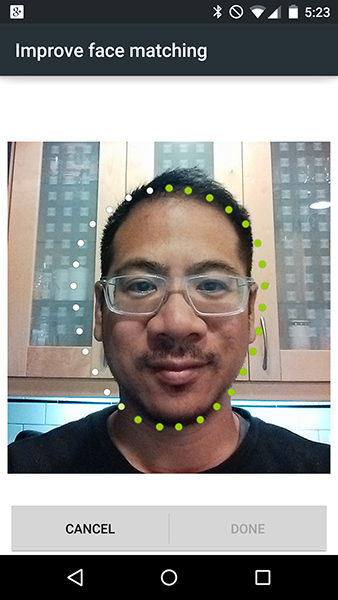 OK, so how’s this different than the Face Unlock of old? Android Lollipop doesn’t make you choose to lock your phone by PIN, Password, or Face. The Trusted Face feature is a layer of convenience. You can still unlock your device using a PIN, Password, or Pattern. If the device scans your face, it’s unlocked.
You might be saying, “I don’t get it. It sounds the same.” Here’s the thing. Android Lollipop now shows your notifications on the lockscreen. 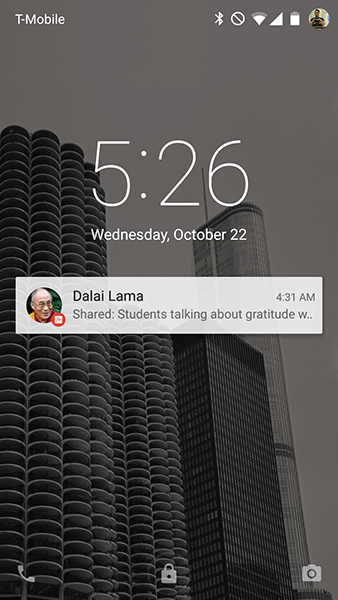 The key difference is: you’re looking at the lockscreen to scan your notifications now. It’s during this time that Android scans your face!
When the device sees your face, this is what the lock screen icon does:

Now your phone’s conveniently unlocked for you without you having to think about it.
This seems like such a minor thing, but it shows the care and attention Google has been paying to Android’s design recently. They took this technology (face recognition), and finally applied it in a useful way. It’s a subtle thing, but the difference between “staring at your phone to unlock it” and “reading a notification unlocks it” is a huge difference.

Still not sure I’d trust it though—can you bypass it with a photograph? But I love the convenience and automatic-ness, it bespeaks a level of thinking that addresses the whole experience and not just an individual feature.

So when you have no notifications you either are back where you started (with staring at your phone to unlock it) or you have to unlock it in a more traditional way.

If you liked this post by Jamie, you’ll probably like reading Photo: More on selling your by-products: The Dum…, Video: The Dot and the Line: A Romance in Lower…, and Video: Bruce’s keynote at the SXSW music festival…