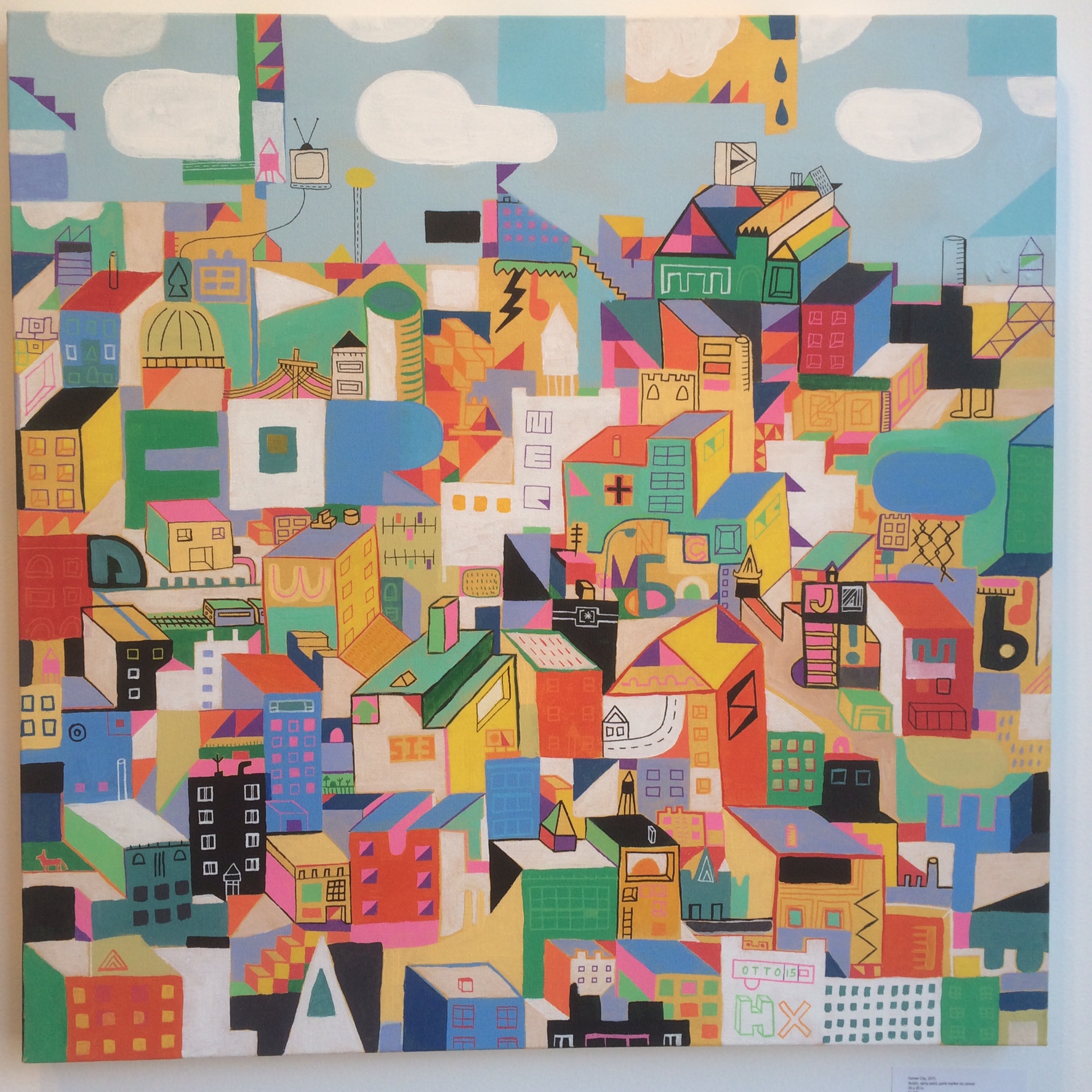 About five years ago I consciously willed an art career into existence. At that point I had been working a social services job for about five years. I initially took the job because it wasn’t specifically art related. It was a job I could feel good about — helping people with disabilities — but it wouldn’t tap my creative juices. I had learned many years before when I got a job doing graphic design that being creative at work drained my creative life bars during my down time. This social services job would leave me with enough creative energy to work on my art when I got home, but in reality that wasn’t really happening. Furthermore, the job itself was becoming a frustrating dead end. I had learned that working in a large organization with seven direct bosses wasn’t an environment in which I would thrive. What would my next move be? I was grown up and competent. I felt as though I could do pretty much anything.

Going to grad school to study something pragmatic that would lead directly to a new career was something I considered, but I didn’t really like the idea of taking two years and a lot of debt in order to enter a job market for something I didn’t really want to do anyway. What did I want to do? I wanted to draw, paint, make music, and write. These were the things I had done and wanted to do for my whole life. Art was the realm in which I had the most developed skill and had received the most positive feedback.


At that point I didn’t know where it was going to lead, but I started deliberately putting more effort into making art. After spending most of my 20s thinking that ambition was a character flaw, I was starting to feel it myself. The thing I wanted more than money or respect was to work hard towards something with meaning. That desire to work was now being channeled into making art on a daily basis. I became a factory, cranking it out. I started to pursue shows and I became active in the corner of the art scene that was accessible to me. My initial target was the lower priced market of the Etsy world and art fairs, and I had some success. At that point, Jason Fried, who had been my friend for half my life, hired me to do some chalkboard art in the new offices of 37signals.


Things were going well and they were starting to pick up. I continued to work my job but I was also gaining momentum in art. I felt that I was earning my true identity back, and I continued to work hard, leading to more and more opportunities. Then, in 2012, shortly after I got married, I left my job and entered the wild and unpredictable world of a freelance creative. I got a gig doing “graphic recording” which was ultimately too corporate for me and didn’t last, but I was selling enough work to survive. 37signals hired me to make some art for their short lived Basecamp Breeze product, and that helped considerably. I also worked two nights a week as a door guy at a bar to put some cash in my pocket.


My work was developing too. As my art became stronger and more detailed, the Etsy and art fair world was becoming less tenable. The hours spent and the financial reward were simply not worth it. Lucky for me (and thanks to social media), the “art world” was beginning to take notice. Tony Fitzpatrick, who had long been a hero to me due to his unpretentious attitude and prolific and beautiful output, contacted me out of the blue and purchased a couple of pieces from me. Soon I was watching Game of Thrones at his house every week with a bunch of other artists, and thanks to Tony I participated in group shows in Los Angeles and New York. No longer was I only showing my art in loft parties for hipster kids, but I was also showing in real galleries.


Then, in late 2013, 37signals hired me part time to illustrate a bunch of stuff, and help roll out their identity change to becoming Basecamp. This gig allowed me to drop the door guy shifts and to turn down the gigs I didn’t really want to do. It is a marriage that continues to this day, and I am forever grateful. You see all that hand drawn stuff all over Basecamp? I did that. I feel a jolt of pride when I get a Basecamp newsletter and it features three of my drawings. 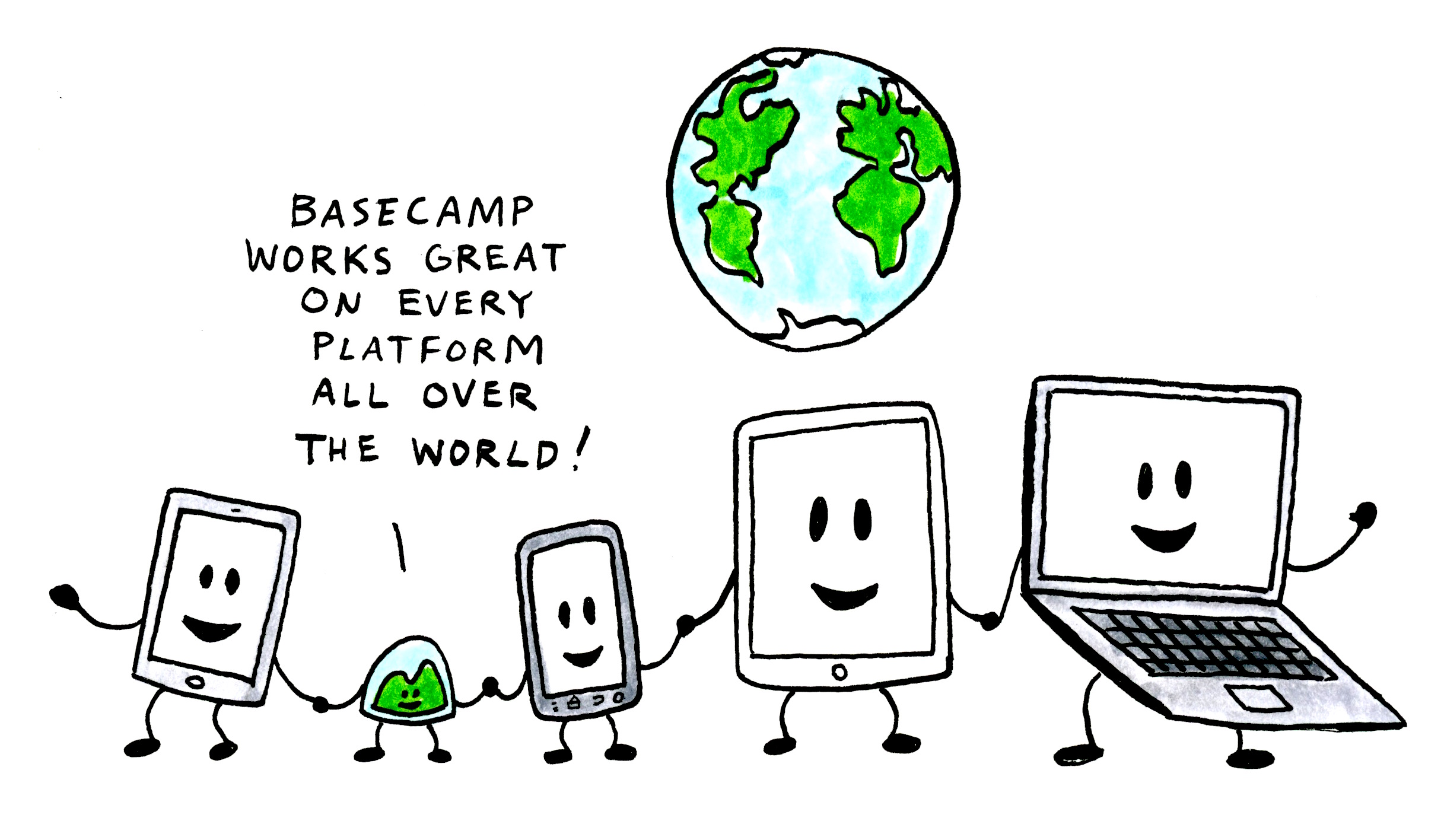 My gig with Basecamp has also enabled me to strengthen my art. I don’t have to make work specifically to sell it. Freed from immediate commercial pressures, I can make the work I want to make. My body of work has grown deeper and stronger. I have now leveled up to the point where I can now have solo shows in galleries. To have a solo show means that a gallery is pretty much putting all of their eggs in your basket for a month. I did a show of small works on paper last August at Adventureland Gallery in Chicago, and currently I have a solo show at one of Chicago’s hottest galleries. Cities, Towns, and Color Fields is the title of my solo show at Vertical Gallery.


I am very proud of this show and I doubt that I would have been able to make it possible without the help of Basecamp. I am still far from where I want to get to in this art and illustration career, but five years ago when I got to work in earnest, I would never have guessed how far I would have come. It may be a “solo’ show, but without my wife, Tony F, Jason F, all the Basecampers, Patrick from Vertical, and all the others who have helped me along the way, I wouldn’t have made it to where I am now. 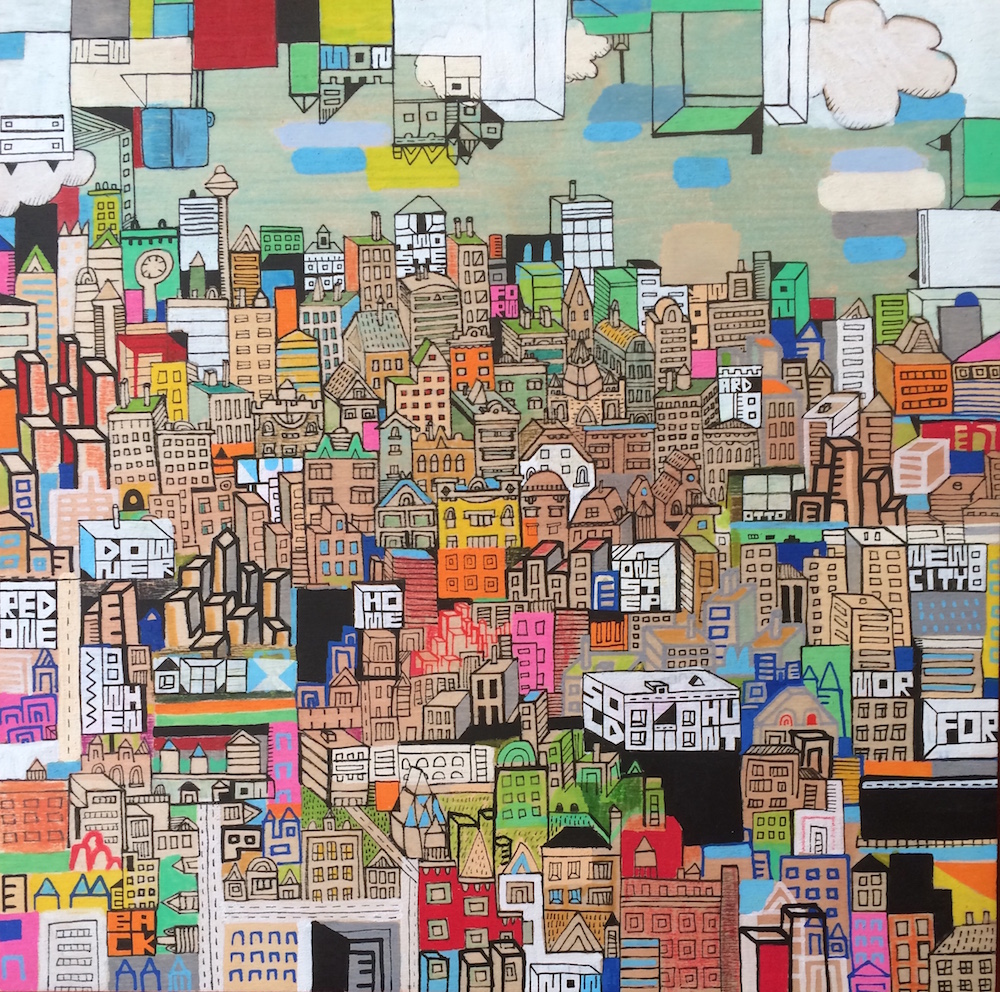 That is a really great story. Thank you for sharing. It’s cool to see that if you stick to what you love and work hard, then one day it will all work out.

We’ve been friends forever, so I think it’s fair for me to say this… Nate’s always been a great artist, he just didn’t always have a great attitude about putting in the work to make it work. Now he’s got that taken care of too, so sky’s the limit! Go Nate!

It’s been great having your work grace our web pages, hallways, and products! Looking forward to more!

Inspiring story, Nate. Thanks for sharing.

I bought one of Nate’s work recently. I think he is a really gifted artist and I’m sure he will go far. Great post nate!

Thanks JF and everyone else! Yup, hard work seems to be the key to many different pursuits. Sorry for the blatant self-promotion, but I think it makes for an interesting story. I read some advice recently about how one shouldn’t necessarily pursue their passion. While I understand where that advice was coming from, actively avoiding the path that was right for me because it was “unrealistic” had taken me down a road that wasn’t right for me at all. I corrected my course and I’m much happier now. As the kids say: “YOLO!”

Thanks for posting such an inspiring story, Nate. I plan on sharing it with others pursuing a creative path. I enjoy your work and look forward to seeing more in the future.

If you liked this Design post by Nate Otto, you’ll probably like reading Deconstructing the Cityscape, Basecamp HQ Mural, and Extra Drawings for The Distance