Many writers and publishers are freaking out after Apple opened Safari to ad blockers in iOS9. Ad blockers have been around for a long time, but the fear is that this is the move that will take the concept mainstream.

That fear appears well justified. The App Store’s charts have been dominated by ad blockers since the release of iOS9 last week. Currently, the #1 paid app is Crystal, an ad blocker, and so is #3, Purify. Clearly some pent up demand.

Another data point is the following poll from The Verge. It was setup with an almost satirically over-the-top slant, and yet readers pummeled them: 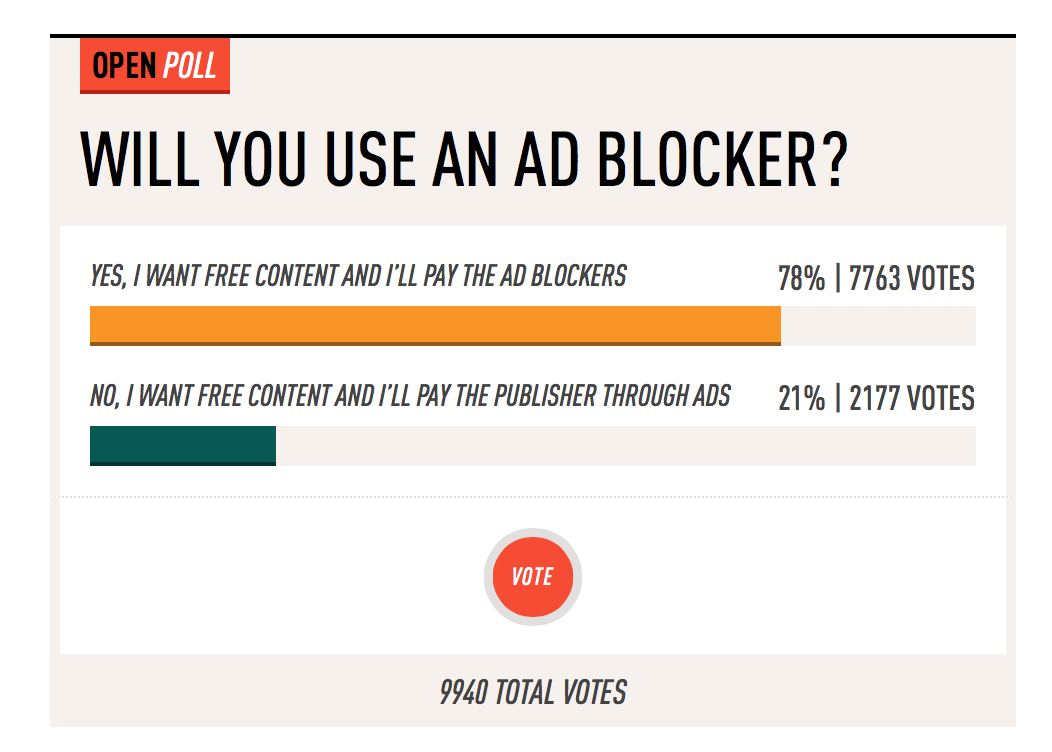 It is difficult to get a man to understand something, when his salary depends on his not understanding it – Upton Sinclair

The prevailing response from the media business to this challenge is hysteria: The World Of Journalism As We Known It Is About To End.

But I think more than a little empathy is in order. The natural response to having your livelihood threatened is universally to FREAK OUT. It doesn’t matter if you’re a French farmer or cabbie or if you’re an internet writer or publisher.

Parallels in movies and music

In 1982, the movie industry infamously went before congress to involve them in a fight against the perceived threat of the VCR:

I say to you that the VCR is to the American film producer and the American public as the Boston strangler is to the woman home alone… The investment of hundreds of millions of dollars each year to produce quality programs to theaters and television will surely decline.

Consumers are going to stop going to movie theaters, or they’ll skip over commercials on broadcasts, and the entire industry is doomed! Ring familiar?

Fast forward to 2014: The movie industry just set another revenue record. Despite VHS, despite torrents, despite Chinese bootlegs.

But the movie and TV industry has indeed made great changes since 1982. Customers wanted to enjoy movies and TV shows without commercials. From their home. On demand. And when the industry woke up to the futility of first blaming, then suing their customer base, they found a big market just waiting to pay for their creative output (oh, and the public never did stop going to the cinema either).

Another parallel is the music industry. MP3s and Napster caused similar consternation in the early 2000s (and the cassette player before that). Nobody was going to put out music anymore in this new world of flippant piracy!

Yet here, unlike the movie business, there actually was shrinkage of the overall market. From 2002 to 2014, the US music industry went from $25 billion to $15 billion.

So one story of better than ever results, another story of shrinking results. Such is the nature of business! If you believe that you’re somehow morally entitled to an ever-increasing industry pie, reality is going to be a merciless teacher.

The lesson to take away from disruption, beside that it’s better when it happens to other people, is not “everything is going to turn out as well as today or better”. Rather, it’s that fighting what consumers want is a losing battle. Blaming them or shaming them doesn’t work. Those are merely stalling tactics—a way to cope with the pressure and anxiety of not knowing what tomorrow is going to look like, or whether you’re still going to have the same job you do now.

People are spending more time reading online than ever. If the written media business can only see a dichotomy between “we must have privacy-invasive trackers along with bandwidth-hogging and overlaying full-size ads” and “death”, they’re just not looking hard enough. But that’s okay: YOU’RE FREAKING OUT. It’ll pass, or at least recede, and you will come to your senses.

The pendulum had swung too far. Publishers had abdicated far too much responsibility for the user experience and privacy concerns of their readers for too long. The ad pushers grabbed that opening and cranked the nasty to 11. There was bound to be a reaction. This is it.

It’s a soothing story to blame Apple, pin them with a motive of treating journalists and publishers like collateral damage in a war against Google. But there’s an easier answer: It’s simply better for Apple’s customers!

(Remember reader mode in Safari? Hiding all the ads, reformatting the text? Same motivation, no complaints from the industry because it still loaded the ads, so even if readers never saw them, they still counted.)

Anyway, the proof is in the App Store chart pudding! Customers are flocking to pay for a solution that restores some sanity to their mobile browsing experience.

You can cry about it, you can stomp your feet, you can call Apple and readers mean names, but the ice cream isn’t going back on top of your cone. Take a few weeks to grieve, then get on with the mission of figuring out how the written word carries on without shoving intrusive ads down readers’ throats.

You can do it.

“restores some sanity to their mobile browsing experience.”

I believe only Apple can do this on iOS as it requires a browser which does not crash constantly.

This post is more understanding than most in the tech sector whenever people’s livelihood is put at risk due to innovation but the progress train comes for us all and at some point entry-level web based project management software, rails devs, etc will also be on the chopping block. When those days come I hope we can look back and be proud of how we treated cab drivers and writers and expect the same understanding.

Balanced viewpoint, as always, David. But what if there is no sustainable non-advertising business model for publishers? Subscription-based likely has low upper-limit above which the majority won’t pay.

I don’t pretend what the future will ultimately look like, merely point to historical parallels that turned out less dire than they looked to the people freaking out at change at the time!

I do think there are some good tracer bullets fired, though. I highlighted pre-roll podcast ads recently, and the MacUpdate Daring Fireball post comes to mind too.

But I also think that subscriptions are going to grow for the big brands: NYT, Wapo, WSJ, The Economist.

Beyond that, some publications probably will go out of business. Some models aren’t sustainable. That’s scary, but the way the world turns.

We’re also going to have to rethink how we do analytics because, all of a sudden, those javascript trackers such as Google Analytics and Clicky (as used on this very site according to Ghostery) can’t be trusted to count users. Well, we never couldcould trust them, but the mainstreaming of blocking software means the slice of visitors who can’t be counted is going to be too great to ignore. Be interesting to see of visitor numbers as tracked by blockable analytics software really do take a dive or whether the difference is negligible.

I hope this comment gives you as much delight as your post gave me. Good luck on your upcoming launch.

My thoughts on ad blockers are a chance to save a lot money, since we in Germany have to pay money for a limited mobile flatrate and it is not very cheap. So I am very happy with the option to block content!

I had hoped to see a Flattr or Patreon button beneath your text: A way to make money without fighting against your readers.

Do you know the public financial reports on online payment from the Taz?

That’s completely voluntary payment, and they are now at roughly 30,000 € per month.

But one good point which could get lost in that scaling: They already earn more with voluntary payment than with advertisements.

I don’t block ad’s, I block trackers. It’s depressing how frequently that works out to be the same thing.

I think the comparison to those other industries are a bit of a strawman. Movies and music were always something we paid for, by buying physical media, tickets, cable subscriptions, etc. This isn’t the case with the web. Since it first started to creep in front of people in the late 90’s, stuff was free. It replaced print media. So what happens when you take away the thing that paid for the thing that replaced the dead trees?

Maybe a freak out isn’t in order, but concern definitely is. This is especially true for the indie publisher that needs to spend just enough to support an audience.

I think that this creates two options, not that they are new:

1. Give your content away for free (Marketing) and offer a product/service that you can sell.

2. Make content unique enough and valuable enough to charge for.

For #2 people have been selling magazines, books, etc for a long time before the internet. People are obviously willing to pay for what they like.

As for this move actually killing the media industry, I don’t see how. Supply and Demand is going to go into effect here. Marketing departments will still have the same budgets, with less outlets to go to, the print industry will probably get a boost. That means while jobs may shift, it will probably not kill the industry. Good writing is good writing whether for the web or printed media.

If ad blockers actually killed all content, there would no longer be any content. Yet, content is important – there is significant demand for it. Therefore, people will figure out how to make content, and this will probably involve making money from it.

What Brandon said (option 1.) is an obvious option. SvN is an example of it.

I have been using ad blocking for years. This isn’t something new.

If you liked this Business post by David, you’ll probably like reading Making shit work is everyone's job, Stop whining and start hiring remote workers, and No more remote work at Yahoo