This is part of our “Bootstrapped, Profitable, & Proud” series which profiles companies that have $1MM+ in revenues, didn’t take VC, and are profitable. 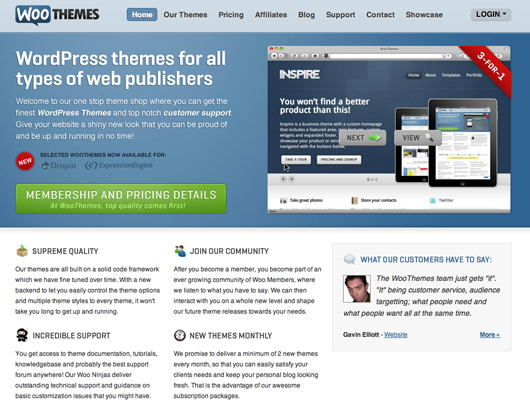 In April of 2009, Adii Pienaar (from Cape Town, SA), Mark Forrester (London, UK) and Magnus Jepson (Stavanger, Norway) met up in London at the FOWD conference. It was the first time they were all together in the same room. Rather surprising when you consider they’d already been running a successful company called WooThemes for over a year together.

The backstory: Pienaar had started a business called Premium News Themes which released the very first premium WordPress theme in November 2007. Soon after, he got an e-mail from Jepson about collaborating. A month later, they released their first collaborated theme.

Then Forrester entered the picture. He was visiting Cape Town in January 2008 and Pienaar met up with him to discuss working together. They released their first theme together a month later and continued working on more. All the while the trio continued to do freelance work on the side.

By July, sales were far exceeding the earnings from freelance work. So they gave up the freelance work, formalized the relationship, and began focusing exclusively on the company they dubbed WooThemes. Now it’s a full fledged business that designs and develops templates for WordPress as well as Tumblr, ExpressionEngine & Drupal. 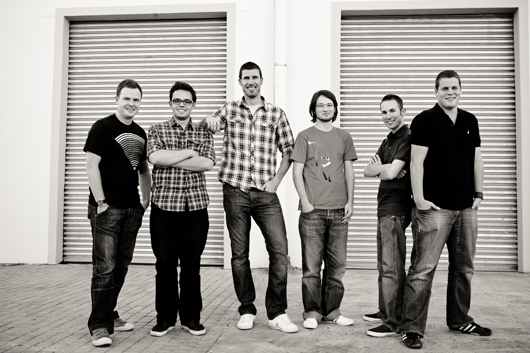 10-15% month-on-month growth
In the two and a half years they’ve been operating, they’ve had a consistent growth in revenue (doubled it in the last 12 months actually). Pienaar says, “I think the important thing for us is that we have organically built a revenue & business model that is based on sustainable growth (approximately 10-15% month-on-month in the past 18 months).” They also now have five employees working with them (the team).

Bootstrapping the whole thing meant no investors were needed. “We’ve been making money from the very first minute we released our first themes, which means that we didn’t need to pay back loans or really invest in any infrastructure when we started out,” according to Pienaar. “We also had the benefit of being able to cover our own lifestyle costs in the initial phases via doing freelance work; so we bought ourselves a bit of time.”

This ties in with the company’s firm belief in organic growth. Pienaar comments, “We’ve found that organic growth is much less risky in terms of only investing in growth when it is already justified. As a company, we’ve never been afraid to reinvest in either growing the team or expanding our products, but both of those decisions where made at times where we had a much better idea of how viable the return on those investments would be. The only downside to organic growth is that it inherently requires patience. Funding is not used to ignite a growth spurt so instead we rely on the customer base and community.”

According to Pienaar, the key is avoiding bloat. “We are extremely ambitious and we’d love to grow the company as much as possible, but never getting to a stage where we have a bloated team, where daily tasks are about chaos management and where work starts influencing our personal lives negatively,” he says. “To a large extent, WooThemes is a lifestyle business for us, where we want to enable ourselves to work on stuff we’re passionate about, while pursuing financial success and security.”

Pienaar’s fine with the moniker of “lifestyle business,” even if it means some view it less seriously than “real” businesses. “Serious businesses are always on the hunt to increase ROI & the financial bottom line,” he says. “With WooThemes we’re trying to find that balance between financial ambition and the happiness that WooThemes creates in our individual lives.”

Collaborating across continents
Half of the team is located in the Cape Town office, and the other half is working remotely from European locations. The team rarely meets and gives employees freedom in terms of how and when a team member works. Pienaar explains, “To a large extent this hasn’t mattered at all. In terms of building a team & company, we’ve been unaffected as we have e-mail, Skype & Basecamp to collaborate with each other irrespective of our location. This has also meant that we can hire top talent from anywhere in the world.”

It’s not just the tools that make the collaboration work. “I think the main reason we managed to make that arrangement work is our trust of each other and also our interest and passion for a shared goal,” says Pienaar. “A lot of what we were doing was never formalized on paper and we were just working based on the friendships that we forged online; friendships that could only be formed as a result of the passion & ideas we shared.”

The company also has a community of around 26,000 designers, developers, bloggers and business owners. “We have created a niche, micro-economy, where a lot of our users — specifically the designers and developers — are selling add-on services that relate to our themes in one way or another,” according to Pienaar. “So we’re finding that users are helping each other on our support forums, while also building their own businesses using our themes.”

Oh, and the team is trying to avoid going another long span without ever seeing each other. Now they try to organize a WooTeam meetup at least once every 6 months.

Advice for others
Pienaar’s advice to others who want to start a business: 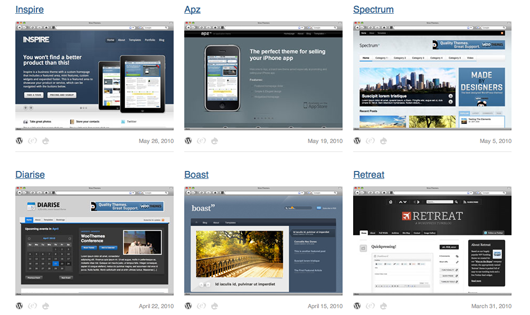 This is an excellent series. Keep it up.

Recently met up with Adii and Cobus in New York City. They’re awesome guys and run an amazing business. They do a lot of things really well all while running their company out of South Africa, which poses a lot of challenges. I tip my hat to them.

Great write up Spencer! I really love the encouragement to bootstrap.

Fantastic stuff, a real inspiration. My partner and I (about 100 miles apart, only 2 in-person meetings so far and no more planned) are building and launching our own online product which we both have an abiding passion for and are keeping a blog about our experiences. We’re running along exactly the lines that you advicate above, and it’s going very well. We are not long from launch now and this is exactly the sort of inspiration and “keep at it” message that we need – thank you.

Another great profile. Congrats. What I like about the Woo theme model most, is the use of a distribution channel to sell the product. Having designers and developers as a built in sales force keeps marketing an customer acquisition costs low.

Providing a “base” product to the distributor that they can sell “add-ons” for, shows forward thinking about creating a good quality of life for their distributors… so unlike the affiliate marketing offers (scams?) that pervade this sector.

Being clear that the Woo customer is the designer/developer not the end-user of the theme is a powerful position.

WooThemes does over $1 million in revenue?

Does anyone else find that hard to believe?

I wonder if $1 million in revenue is not PER YEAR. But cumulative revenue.

Some quick math on revenue: WooThemes has about 70 themes available. If they sold 200 of each per year at the lowest price ($70):

I know some of their themes are free, but that estimate is without any developer packages, club memberships, advertising revenue, or custom work on the side.

That’s some strange math of yours there. Also keep in mind that for $70, you get 3 themes, not just 1 theme.

Nonetheless, that’s a ton of customers.

Their site and UI is way more intuitive than themeforest.net. Beautiful themes, too.

I wonder: what are sites like 99designs, Woothemes and Themeforest doing to designers’ incomes? I’m not primarily on the design side of things – at least freelance-wise. But it seems like it could work two ways:

1.) They could be bringing good design to the masses (and therefore educating people and increasing demand) or…
2.) Commoditizing design and making it a “lowest-price” game.

I’d be interested to hear what you guys think.

Woothemes has achieve grate success and seems maintaining it as well, kudos to wootheme team.

To the WooThemes team:

What sort of feedback have you received on your comic-strip style explanation of your product?

I love this series, very inspirational and makes me hope that someday we (codesnipp.it) will be on it _

@Lance – We’ve received only positive feedback and whilst the comic strip is hidden a bit (i.e. it’s not on our homepage), we have experienced a decrease in FAQ-type questions via e-mail since we started using it.

This is a pretty good business, especially the numerous websites that are based on wp or drupal are looking for fresh page designs.

@Adii, Do you really have 1$ million annual revenue?

@Andres – Sure, why do you doubt this?

Love Woothemes’ clean designs – can see why it works and they’re turning a profit.

I love the fact they found each other across continents and made it a success based on passion and trust. We are always on the lookout for developers and seeing success is borderless is great.

Fantastic interview from a company that i’ve been using for about 6 months now. Its always good to see a business operating as a lifestyle business while implementing processes that ensure that customer service doesn’t suffer.

I must be honest, i don’t use any other wordpress themes other than Woothemes. Professional, great support!

If you liked this post by Matt Linderman, you’ll probably like reading Fit to be used, On Writing: Warren Buffett, London Review of Books personals, kGTD, and Microsoft System Center Ad