If there was a buddy cop movie starring the Geico gecko and the Aflac duck, I’m pretty sure it would outperform “Edge of Tomorrow” at the box office.

We love our anthropomorphized branding mascots. Shortly after Basecamp hatched its own such character, I was watching a big event on TV, and it seemed as though every product in every commercial had sprouted arms and legs. I guess we are part of the zeitgeist.

While I would love to take credit for inventing our Basecamp creature because he came out of the tip of my Micron, the fact is Jason asked me to create it, and it’s pretty hard to go wrong by adding humanoid features to the Basecamp logo. The results are bound to be adorable. Shawnimals had made a similar character months before with the Happy Sherpa, and our design intern this summer, Julia, also made a nice version. That said, I’m proud of the character I helped create, and I’m glad to see it gain momentum. What started as an experiment seems to have taken hold. 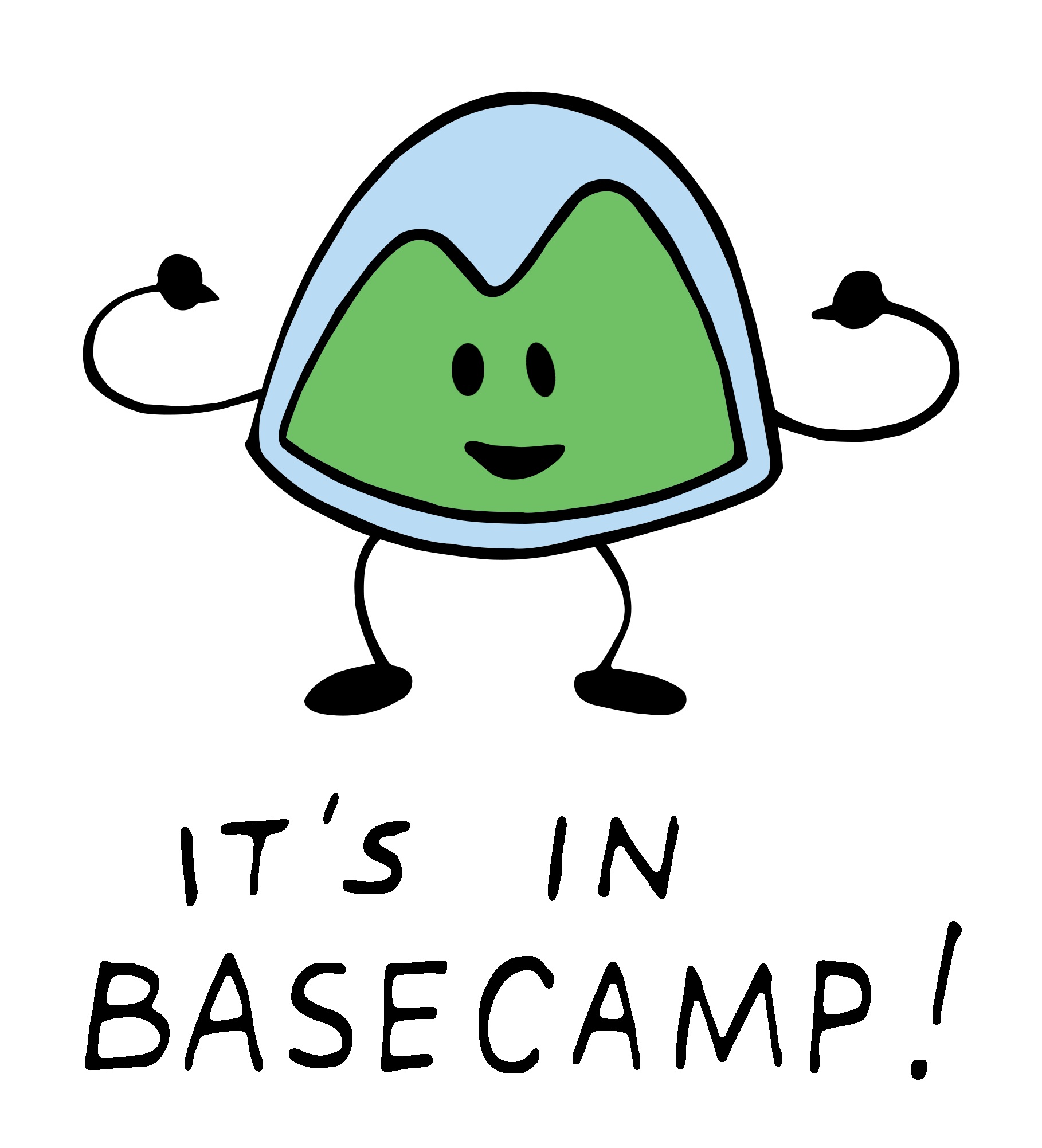 At Basecamp, our marketing is more intuitive than contrived. We don’t have dedicated marketing or sales staff. We pay attention to data but it doesn’t own us (take that Noah). I think the philosophy has been that the best marketing is a superior product. Basecamp sells itself, but it doesn’t hurt to have something cool to print on T-shirts. That is where this mascot comes into play. Internally we have been calling it “Basecampy,” and I heard someone call it “Mr. Basecamp” the other day. Let it be known, however, that it is genderless. It reproduces through binary fission. A creation myth is in the works. Basecampy may stick as the name, but we are open for suggestions. Leave your thoughts in the comments.

Ha. It will not become “Clippy,” I’m pretty sure of that.

This has been going on in Japan for quite some time google Yuru-kyara… i’m interested in seeing how this evolves on the US.

My daughter, who names everything ‘Runo’ will license it to you.

I’m frankly despondent about the growing tendency to sell serious products (in the UK for example things like insurance and mortgages) with funny little anthropomorphized characters.

(god I am grumpy today)

I would call it Scamp.

Wait, how does a bill become a law?

I’m with @Jonathan Irons. I love the product, but I’d hate to see it start to take on characteristics of the mascot, or have him show up anywhere except the T-shirts. The clean, fast, uncluttered design of the product is personality enough. Don’t get in your own way.

I always wished we’d managed to use “Yodel” as a product name somehow, but maybe it fits better as a mascot name? Isn’t that what this little guy does—-calls to people? You could even record Shaun doing a voiceover for him. (Surely Shaun yodels?)

If you liked this post by Nate Otto, you’ll probably like reading Multitasking, Deconstructing the Cityscape, and Drawing Trouble