It’s been quite a ride since REWORK launched on March 9. We’re proud to say the book has reached #4 in the “Hardcover Advice, How-To, Miscellaneous” category at the NY Times bestseller list in its second week: 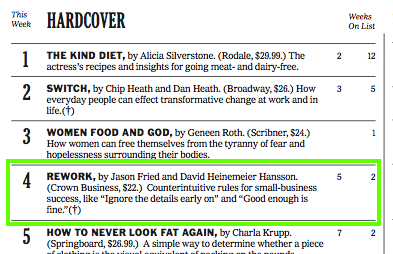 Maybe we’ll make an attack ad against Alicia Silverstone next (“She really is CLUELESS!”).

It also debuted at #2 on the list of Best-Selling Hardcover Business Books at the Wall Street Journal: 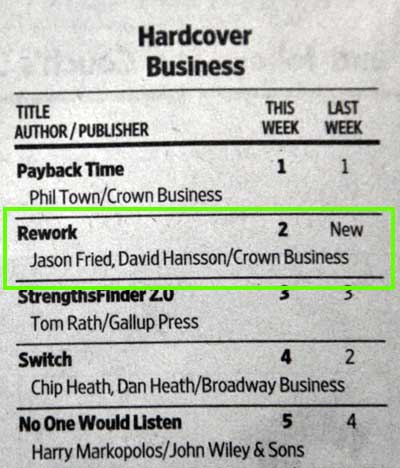 It’s also #4 at USA Today’s Money Best Sellers list. According to our UK publisher, it will be #1 on the UK Sunday Times business bestseller list this weekend. International copies are out in many parts of the rest of the world too.

Reviews
Best of all, people are loving the book. The average customer review at Amazon is 4.3 out of 5 stars (after 47 customer reviews). Here’s a sampling of reviews REWORK has received so far:

Alexis Rodich, Washington Post: “I want to buy a copy for everyone I know”

Jack Covert, founder of 800-CEO-READ: “I cannot over-emphasize its value”

Noah Fleming: “Provides you with more real-world applicable business knowledge than an MBA”

Emails
The emails pouring in from readers have also been really kind. Thanks to everyone who’s taken the time to write. Here’s a note from Winn Elliott:

I’m not gonna lie… I didn’t see this coming. I just got my copy of Rework today and have now read it cover to cover. Twice.

Thank you guys for inspring me to be a better leader. This is exactly what I needed to hear… Confirming both what I’ve done right—and wrong.

Others have had similar kind words and we really appreciate it.

The attack ad
Our ad that “Swift Boated” Karl Rove made its way around the web too. Nearly 40,000 views at YouTube and mentions at Newsweek, Washington Post, Chicago Tribune, Huffington Post, Valleywag, and lots of other places. And, according to one media source we spoke with, Rove has seen the ad and thinks it is “hysterical.”

And here’s an interview with Leo Laporte where David looks like Robocop:

More press is on the way too. One thing we’re still hopeful for: an interview with Charlie Rose. Anyone out there who can help make it happen? Seems like it would be a great fit.

Also, if you find your local Barnes & Noble or Borders store is out of REWORK, please let us know.

Congratulations, richly deserved. And “EHH” as Robocop too!

Congratulations on the success of the book. I’m expecting my copy to show up at the door any moment now (along with Switch). I know what I’m going to be doing in my free time over the next couple of days!

Great work guys. I have fallen in love with your no nonsense business approach over the last couple months and just bought your book. In the mail tomorrow, cant wait. Keep up the good work.

Congrats guys- I thought your message might be too anti-establishment for the mainstream but I am glad to see your success here. Rock on and thanks for the inspiration.

I just received my copy yesterday. I’m half way through and loving every section. Awesome! Congrats on a great launch.

I’m absolutely shocked the words “fuck” and “bullshit” didn’t make it in the ABC interview.

Is this the first interview without swearing guys?

Thanks you so much guys, I got the audio version and have listened to it already about 3 times. It’s an awesome business book and yet very motivating.

I read the first chapter last week and it totally blew my mind. I knew this was the book that I’d be reading many years down the road to remind myself that there ARE always two side to a coin. And when everybody else is saying the same thing, it might be time to change.

I’ve been reading it chapter by chapter and trying to absorb all the essence instead of finishing the whole book in one go. Love it!

What I struggle with, is that I know what I am reading is right, but my habits, my company’s culture, and any number of other things are conspiring against those very points.

So, I know the contents of the book are what I want. The trouble is the implementation of it.

I’m sure I’m not alone here.

I swear, I thought Leo Laporte was going to say David Heinemeier Hasselhoff during the intros. Twice. Weird but true…

How does a book make the NYTimes “best seller list”?

Aside from obvious forms of manipulations (i.e., go buy a pile of your own books, as folks have done) it looks like sales is pretty much exactly what it’s based on: Wikipedia’s entry

The NYT list is a bit of a mystery. It’s not just based on sales. Sales play a large part, but raw sales numbers aren’t the only measure. Where the books are sold, the ratio of online to offline, and other factors play into if/where you end up on the list. For example, our sales numbers were higher than some of the books above us last week, but we ranked lower due to other factors.

Would love to see you guys on Charlie Rose. Goodluck!

Really? Rework “is awesome”? Sure, listen to a monkey of a tech journalist, Larry Laporte. This guy doesn’t know an array from a hashtable and do you think he has a business of his own? Not a f*cken chance.

This book is full of negative, useless tips and nothing more.

“Don’t do this”. “Don’t do that”. Come on, seriously? This book teaches you what NOT to do to KEEP SMALL and run a TINY business.

Why wont Jason or David TELL US THEIR REVENUE? You know why? Because it’s tiny. It’s a few million. No where near what they’d want you to believe.

They say they have 3 million customers. Lie. It’s 3 million free trailers + customers. More like a few thousand customers. I’m sick and tired of books like this which make “big business” sound like a bad thing.

They forget that without big business they wouldn’t exist. Pure and simple.

David and Jason’s ideas are why they wont ever top $10 million in revenue. They think small, stay small and will remain small. It is NOT a model for a company in today’s economy. You have an experience building a TINY company and you thrust your bullshit ideas on everyone?

Your advice is your opinion and I’d steer clear of this book. It will make you small and keep you small with its negative views. Read “Inside Intuit” instead. A MUCH BETTER BOOK if you want to grow a killer software company.

Self-conceited jackasses don’t write good books. Rework is a case in point. Mark my words you wanna be entrepreneurs.

My name is withheld but I’m founder of a software company which pulled in $32 million in 2009.

Maybe we’ll make an attack ad against Alicia Silverstone next (“She really is CLUELESS!”). Wow, what a hateful thing to say! (I understand the movie reference, but that doesn’t make it funny)

Nearly all of the content in REWORK was repurposed from Getting Real and Signal vs. Noise. I’m okay with that. They practice what they preach.

I think the goal of this book was to take a lot of the great ideas from Getting Real, which was somewhat software-oriented, and make them available to a wider audience. I have Getting Real and REWORK, and I like them both, even though there’s overlap.

I recommend REWORK to a lot of our clients, and I recommend Getting Real to our peers in the software business. Overall, I think their strategy has been a success, and I’m a proud supporter.

Deluded, Inc. – If you are so successful, run such a profitable business, and are calling these guys out, then step up and tell us who you are, what business you run, and how you have been successful – so we can learn from you. I help run a successful, profitable, SaaS business, and we share many of the same philosophies as 37signals.

My B&N store wasn’t out of Rework, but I sure had to be persistent to find it! It was tucked away in the business section, w/o even the cover facing out! Karl Rove’s book was right up front in the entrance, though. :-)

I think the nay-sayers here are missing the point. Not everyone can do exactly what the 37s guys did. Lots of people could be inspired by the fact that it can work, though, and incorporate some of the ideas into their own businesses. Even if it’s just “get off your ass and do something” – don’t have to have a web bubble business to do that, right?

Boy, SELF-conceited. That must be way worse than plain-old conceited … :-)

I am seeing a PAPERBACK copy of the book on Amazon UK and Amazon Germany which would be perfect for my return flight to the US in a few days. Is there any difference between the paperback and the hardbound on the inside? I don’t want to miss out on the illustrations.

I can’t say enough how much I loved your book, and I’m halfway through Getting Real now. Snowball’s chance in hell of getting anything like this implemented at my current job, but hey, I won’t be here forever! ;-) Seriously, congrats on your success, both literary and IT. Look forward to your podcasts as well. -R

Congrats on the book’s success! I got my copy from Amazon on Monday… maybe this weekend I’ll have a chance to start reading it.

Just finished “Getting Real” and am working on “Rework.” Very impressed so far. Just wanted to say great work and congratulations on making the bestseller lists.

The last email (from Paul) on the Backpack page you linked to says , ‘Note: Do not publish last name’. The last name is published on that page.

I wanted to say this is the best book since sliced white bread. A friend recommended this tome of awesomeness when I told him I was tired of the rat race and wanted to have my own business.

I absorbed your book in two nights, got up and but myself into high gear ever since. Thank you, Jason & David, for putting the wind back in my sails. Because of Rework, my cook book [http://www.amazon.com/dp/B003DZ1H2O] is on Amazon and I’m working on various projects because of it. Thank you again!

Great work guys. I’m still waiting for my copy to show up (should be any day now). Hopefully this helps big companies wake up and rethink how they do business.

Is there a reason why the ebook is almost twice as expensive as the hardback?

If you liked this post by Basecamp, you’ll probably like reading Product Blog update: Preview of WYSIWYG in Basecamp, new extras for Highrise, and more, [Sunspots] The deep breath edition, and [Sunspots] The intuition edition