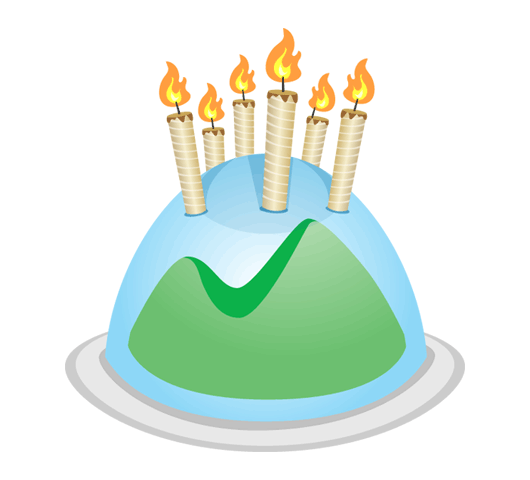 Today Basecamp turns 6. We launched Basecamp in February 2004 – here’s the original post on SvN that launched it all.

Birthday stats are always fun. Here are some of our favorites:

These numbers are based on open accounts. We’re not counting cancelled accounts or deleted messages/comments/to-dos/files etc.

We’re thrilled with the growth over the last year. Thanks to everyone who uses Basecamp or any one of our products. We’ve got some great stuff in store for you this year so stay tuned!

A huge congrats and happy birthday!

Happy Birthday! – A birthday idea: a screenshots timeline to see how the UI has evolved

Congrats and best wishes. Keep up the awesome work.

I’m not really sure where my business would be without Basecamp!

Hard to believe we’ve been using it for almost 5 of those 6 years. Thanks for the great products, and for keeping it simple.

My warmest congratulations! Carry on!

Little Misto has grown up.

Now I just need to start on my specs and wireframes and do some user research and I’ll be superficially almost there.

Interesting to see the same number of users & projects.

OH “We’ve reached the point where software birthdays make you feel old, too.”

Congratulations. I can’t begin to relate how much Basecamp has helped my business grow and kept me sane.

Without gushing too much, I have to say that when I signed up for Basecamp and figured out how to use it for my purposes coincided with the moment my business blew up.

I was in a meeting at a multinational company today and the topic of sharepoint came up. Some people in the room weren’t familiar with it, so the person who brought it up said, “it’s kind of like basecamp.” I’m still trying to figure out if that is a good thing or a bad thing.

Tony, Sharepoint is 100% times better than basecamp for projects documents and colaboration. And 100% more complex with 100 times more administrative overhead. Say goodbye to your Benjamins’ with SharePoint.

With only 14 comments so far, I wonder if this is an indication that 37signals have lost its love within the web community.

mrgray: how many times is 100% times better?

Congratulations 37signals. It’s been great seeing Basecamp and all of your other products get better and better over the years.

Happy Birthday. It’s been great for the past 4 years and I’m looking forward to more. I love the contant improvements – keep ‘em coming.

But seriously guys, take the night off and go have a drink. You deserve it.

Congratulations on the anniversary. I think it’s funny that each user has averaged less than 3 milestones.

Congratulations with 6 years! We’re using basecamp for vbirc.com / mrfloris.com / wetalknation.net project management and more! Couldn’t do it without it.

Thank you for helping us to organise ourselves, our clients and for the inspiration to invent our own applications.

Thank you! It still “works.”

Great, we love Basecamp and our entire business runs on it… cant wait to see new features on it!

Happy anniversary and thank you for providing us with this amazing tool. Our business would not be the same without you!

Too Cool!! A BIG Happy Happy!! May all your dreams come true! We love U BaseCamp! Keep the home fire burning!! We are proud of you,after all your part of our team too!! Congratulations!!!

Happy Birthday – we love you guys!!!

Happy birthday guys, great job! On a side note (hehehe…. ) basecamp favicon is not showing in my bookmark folder, while other 37signals product showed.

Congratulations! Like others, I’m a huge fan and appreciate the added value I’ve been able to provide my clients’ businesses. I’ve enthusiastically passed the gift of Basecamp on to several others. Thank you for being a trusted resource.

P.S. I love your note about removing vapid comments! Must steal that one. ;)

Well done….loved the book and the products!

Best Wishes :) and keep up the GOOD work!

Congrats from the Netherlands! You’re products are just great stuff to work with!

Basecamp, first place to look in the morning after coffee.

Happy birthday all at basecamp you have revolutionised our project management

This reminds me, my business is turning 7 this week. It was just about a year after I started up that I read about the launch of Basecamp. What a trip.

Here’s to another 6 years and then some…

Happy Birthday! We’re are using Basecamp with 120 active projects, 200 people and are very satisfied. It simplified our business and helps us to create value.

Happy Birthday, Basecamp is a key tool for us to deliver projects with about 200 contributors around the world, across all time zones. We love it! Thanks for all your efforts, looking forward to new features.

Cograts you guys, love your products, keep up the good work!

Keep up the good work, guys. And go international, please :)

Happy Birthday! I have been a happy customer for a couple of years now. Great work, and your Getting Real makes a difference.

Congrats!! Take some cakes and coke and celibrate, but monday get back to work! ;)

Well I must be one of Basecamp’s most diverse users as I use it to manage customer relations for my lawnmower servicing business – and it works great.

Congrats guys !! You should be really proud of your amazing achievement ! Ben

I am still happy – and still using it….rare. I usually find something wrong and bail. There is something to be said for that!!! This has really changed the way we manage business. Thank you again.

Happy Birthday Basecamp…we love you :) Thanks to you, we can manage projects a whole lot better. Cheers and congratulations to the BasecampHQ team :)

Congrats from Argentina! Basecamp rocks! (a Spanish version would be great)

Guys, we seriously don’t know what we would be doing without you and Basecamp. It has made our work organized, our communication transparent and we think it is one of the biggest reasons we have such good relationships with our clients.

I’ve been using Basecamp since the first year it was on and I love it today more then ever.

You are the best!

I’ve been using Basecamp for over two years and found it a great way to keep my virtual teams on task and focused. The simple / easy UI makes it easy for all to participate increasing the involvement and communications on a project which is directly proportional to its success.

Happy Birthday and keep up the good work!

Happy Birthday! Wish you good luck and improvement of your cool web-based projects!:)

Wow, I’ve been productive for that long now?!? Kudos to you 37signals. It’s the best paid service on the web.

Congratz guys! We have been using Basecamp since 2006 and it never failed to deliver the promise: Getting things done!

Thanks for creating such great products !

Congratulations! Jason, would you like to share with us what kind of numbers of customers/users you planned in the year one when launching the app? What was the reality?

Thanks everyone! Your enthusiasm and well wishes mean a lot to us.

Happy Birthday and thanks for helping our business to stay on top of all our important milestones and tasks!

Congratulations. I was told there would be cake and last time I didn’t get any cake. OK…. this is the last straw!...

You have done a great job! Congratulation! Thank you very much.

Congratulation :) keep it up….

Basecamp a great utility. I can not live without it!

Happy Birthday! I’m a creative and I love You guys! Where is the party?

Happy birthday to Basecamp!! I’m very happy and am looking forward to another six years. Thanks, and cheers!

We’ve been loving and using Basecamp since Nov 2004. It totally changed the way we work.

Only been using since 2008 but has made a real difference to the way we work. May you live long and prosper Basecamp

just hopped on the basecamp bandwagon a month and a half ago and couldn’t be more thrilled about the birthday celebrations. I am hooked. Congrats

Happy Birthday. You guys have a great product and I wish you continued success.

Happy birthday you have been a great help

Many Congrats to Jason and the Crew. You folks are the one constant in a world too fast for some to imagine and too often hard to sustain. Many Thanks

Happy 6th Basecamp…Im a newcomer, but so far so good…I’ll get back to you on your 7th….:)

Happy Birthday from a mexican user!

Just looking for Celebration discounts on my monthly payment…¿why not?,

Happy Birthday! What does 6 equal in software years?? As a Project Manager, when my team gripes they ‘don’t have that info’...I can always say, DID YOU LOOK IN BASECAMP??! Keep up the good work, and maybe consider adding a ‘time’ feature to Milestones :)

Basecamp has been a great help to our business. Thanks for a great product and best wishes for continued success!

Happy Born Day, Basecamp—you cats are makin’ it happen. We love what you do! Here’s to many more!

HAPPY BIRTHDAY! It’s been a great ride all these years :) Thanks for everything!

Getting better with time

Congratulations! You have an awesome product!

Happy birthday Basecamp! Congrats Jason, David and the rest of the 37signals team. The Basecamp and Rails story kicks ass.

Grand! We love you every day… in every steps of out day!

You are an indispensable tool that has dramatically changed how we do our work. Thank you.

Today I wrote a blog post on my personal blog to tribute your birthday. The time flies, it’s amazing you’ve been inspiring and positively affecting startup scene more than 6 years now! Keep on keepin’ on!

Felicidades! ..on behalf of the Pura Vida team in Argentina

Would love an “Ask Mark” about your infrastructure. Happy birthday!

Congratulations! It is exciting for me to learn that we are using Basecamp almost the same year it was born :)

You helped us win and retain clients and improve how we server to them. Great job so far and keep improving for us!

Congrats and keep up the great work!

Thanks for a great product guys. Basecamp has increased the efficiency of my business by an order of magnitude.

I even had my main development machine go down on 02/05. Thanks to Basecamp and Subversion I’m up able to get work done, know which tasks I need to address, etc… on a completely different system. I’m billing on 02/06. Woohoo!

Congratulatios for 6th birthday, I join Gonzalo’s claim for bringing Basecamp to multilingual (I care for Spanish) I can’t give Basecamp to my customers for being only in Englihs. Regards.

Congrats! We had a great time with the BC. Hope Basecamp will get better every day!

Happy Birthday! Basecamp rocks!!! I recommend it to all my friends who own businesses.

Could we get some screenshots or maybe even working models of the past basecamps?

I’d love to see the progression.

Congrat Jason and team. Love Basecamp that i am using over the last 2 years. Honnestly, I wonder why Apple does not just buy Basecamp and set it in the iPad. This could be the best app for the business users than trying to mimic RIM. Anyway. I would like to know how many concurrent users do you have today (if not confidential) ? does 3,6 millions represent the cumulated nb of users since 2004 ? or the current active users for basecamp .

If you liked this post by Jason Fried, you’ll probably like reading Darryl C. Didier, Shoes and software, and Great design: The airplane bathroom lock and light switch